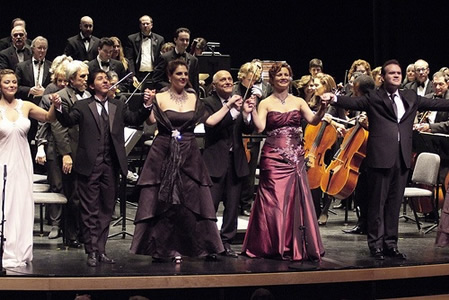 Perelman Theater in the Kimmel Center

The Academy of Vocal Arts (AVA) performed Ottorino Respighi’s opera ‘la Fiamma‘ in a concert version in the Perelman Theater in The Academy of Vocal Arts’ in the Perelman Theater Jan 23, in a minimal concert version with the AVA orchestra augmented with members of the Chamber Orchestra of Philadelphia. This is the first Respighi opera AVA musical director Christofer Macatsoris has mounted and if there were any technical flaws it hardly mattered.

Silvana, restless wife of Basilo in 7th century Ravenna, accepts that she may have inherited dark powers from her mother, the accused witch Eudossia. Silvana’s also admits her love to her stepson Donello, who has just returned to his father‘s estate. Silvana tells Basilo, who has a heart attack, so the question of Silvana’s powers hang in the air with much ariatic exposition.

It gets even messier as Basilo’s mother Eudossia has it out for Silvana, so tensions mount and even a vocally stratospheric fight occurs between the two women. Witchery gets thrown in the mix and Silvana is eventually accused and tried by the townspeople.

The drama mounts. Silvana and Donello, played by Jan Cornelius (soprano) and Michael Fabiano (tenor) don’t merely have a brief stage kiss, more of a cinematic lip lock. Cornelius is mesmerizing, especially controlling Resphigi’s ‘declamato’ scenes- proclaiming her love, proclaiming her witchery and owning her motivations. After a dramatic off the cliff arrest by the orchestra, Cornelius’ a capella freefall is sonic and serene.

Cornelius had great chemistry with Fabiano in AVA ‘la Traviata’ last year and they are equally powerful again. Fabiano doesn’t have the potent level of Cornelius’ physicality, but vocally he is a powerhouse, matching Cornelius’ qualities in seamless phrasing and subtlety. He doesn’t have Corenlius’ inventive minimalist acting skills, which add crucially to a concert version of an opera.

Macatsoris’s pared down the chorus, and seems to spare for the vocal scope of this production. The most compelling section being the dissonant chants by the overworked weaving woman.

The strong supporting cast is by Josué Cerón as Basilio, his baritone floated in and out of surging orchestral waves with lush clarity. Jessica Julin unleashes Eudossia’s mother-in-law hate with lacerating high notes when she proclaims Silvana a witch. Mezzo Carla Dirlikov doesn’t milk the dramatic immediacy as the reviled Agnese, as does Corinne Winters as Monica. Both are compelling in otherwise one dimensional roles.