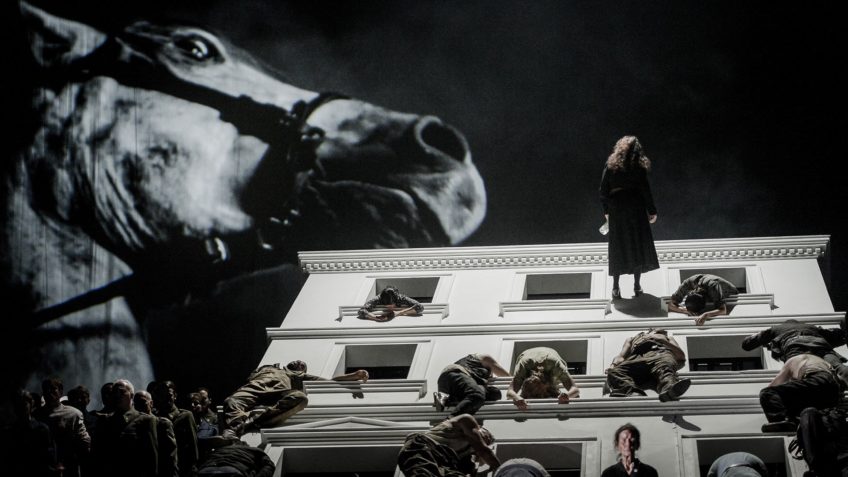 “La Forza del Destino,” (The Force of Destiny) is hard to stage. Verdi’s marvellous music, including a grandiose overture, is one of his best, yet it strays from being a must-see opera for new audiences. This week, the English National Opera (ENO) unite with New York’s Metropolitan Opera to take a gamble in presenting La forza through Catalan director, Calixto Bieito, which takes on variable shades of the dark and grotesque steeped in beautifully rich music.

When Leonora’s South American lover, Alvaro, accidentally kills Leonora’s father (The Marquis) he places a curse on both of them as he takes his last breathe. The lovers are separated but Leonora’s brother, Carlo, vows to avenge his father’s death. Not knowing they are each other’s enemy, he and Don Alvaro fight side-by-side side in the Spanish War, but their destiny had already been set. All three collide and confront the truth – Carlos dies to the hand of Alvaro and Leonora commits suicide.

First shown in 1862, the complexity of the opera comes from its thorny narrative; it deals with so much that one can easily get lost. Daring, high drama arises out of dark forces: misfortune; revenge; and death – it’s hard to see where the spark of destiny fits into it all. La forza isn’t performed as much as La Traviata or Rigoletto, and the conceptual complications of the piece are the main culprits behind that.

Bieito sets the production in the time of the Spanish Civil War with Rebecca Ringst’s bleak and monochrome imagery, inspired by Spanish artists such as Goya’s Black Paintings and Piccaso’s Guernica. Sadly, Bieito’s personal touches are barely connected to Verdi’s original interpretation – a colourful, warm, passionately written masterpiece. Sarah Derendinger’s black and white projections of eerie horses and dead children take no prisoners and make no compromises, alongside Tim Mitchell’s sinister colours of light. Though Bieito’s ideas are dramatically poignant, one cannot sense the warmth or lyricism in Verdi’s score – one has to close their eyes to retrieve that. Instead audiences are exposed to more gloomier and demonic themes of La forza.

Mark Wigglesworth’s second outing as conductor for the ENO is just as taunt as his performance in Lady Macbeth of Mtsesnk. When nothing is happening on the stage, eyes dive straight into the pit where Wigglesworth and the ENO Orchestra illuminate the auditorium. They execute a powerful entry of the lesser-known overture and adaptably soar in to the waves and climaxes that prevail in the final act.

The cast is triumphant. American soprano Tamara Wilson makes her remarkable debut at the ENO as a tour de force. Her voice radiates over the dark and impresses many in the audience. One can imagine her voice shine singing lieder. Gwyn Hughes Jones also make hairs stand on end with his moving performance as Don Alvaro particularly in O thou that within (O, tu che in seno).

Rinat Shaham gives a convincing and shocking display of cruelty as Preziosilla who kicks the stomach of a pregnant woman. She incites violence in the Rataplan chorus whilst containing great vocal strength and clarity. James Creswell as Padre Guardiano also enhances the grim tone by stripping Leonora and crowning her head with barbwire. Much blood, sweat and tears has been poured into staging this difficult opera, yet nothing will become clearer by the end of it which is the perhaps the only downfall of this puzzling production.