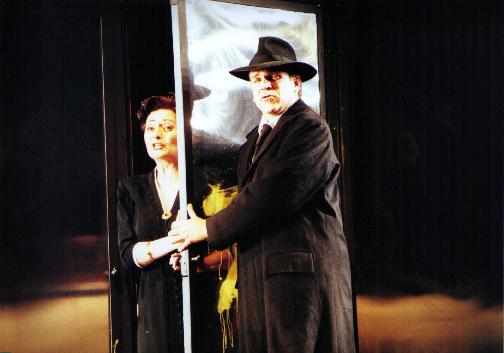 Doomed love, jealousy, mistaken identity and filial devotion. And if that&#146;s not operatic enough for you, the two leading characters are thrown into a vat of boiling oil at the end.

Jacques Fromental Halevy&#146;s La Juive ("The Jewess") has the peculiar distinction of being the only Jewish opera on non-Biblical themes that remains in international repertory. Premiered at the Paris Opera in 1835, it also is the only survivor among more than 30 works penned by the Jewish composer, teacher to the more famous Gounod and Bizet.

Once considered to be one of the masterworks of the French lyric theater, La Juive has been neglected in recent years and is generally unfamiliar to American audiences. Not seen in the Bay Area since San Francisco Opera mounted it with the great Giovanni Martinelli in 1936, it was a logical – if gutsy – choice to be the centerpiece of the Jewish Music Festival, which opened in Berkeley last weekend.

The scaled down, semi-staged production had its plusses and minuses but the best thing about it was to introduce an audience of today to a beautiful piece of music. More Verdi than Massenet, Halevy&#146;s score is mainstream 19th Century Romantic, lyrical and eminently worth listening to. Eugene Scribe&#146;s libretto, on the other hand, is positively Byzantine. In lieu of supertitles, with most of the recitative mercifully cut, it was clarified at these performances by a narrator, who summarized the action at the beginning of each act.

Set in Switzerland, at the beginning of the 15th Century, a time of religious upheaval, the story revolves around the Jewish goldsmith Eleazar, his daughter, Rachel and her love for Prince Leopold who has won her heart in the guise of a humble Jew. Unfortunately Leopold is already wed to an extremely jealous princess. Invited to a Passover seder at the home of Eleazar and Rachel, he is surprised by his spouse and forced to reveal his true identity, if not his exact marital situation.

Although shocked that her lover is a Christian, the still-smitten Rachel convinces her father to allow her to elope with Leopold. At Eleazer&#146;s grudging consent, the princely suitor flees, shouting that he cannot marry a Jew. He obviously had a less permanent arrangement in mind. This rejection results in Rachel&#146;s denunciation of her false lover to the Cardinal at a state dinner. (The Jews have not been invited. They&#146;re just delivering some jewelry). Since it was a crime to become romantically involved with a Jew, Leopold is excommunicated and thrown in prison, along with Eleazer and Rachel.

At the urging of the Princess, Rachel recants her denunciation of Leopold whose death sentence is changed to exile. The Jews are given a chance to save themselves by renouncing their faith and converting, but they proudly refuse and, after a few more twists and turns of the plot, involving Rachel&#146;s true identity as the long-lost daughter of the Cardinal, the aforementioned business with the boiling oil ensues.

It&#146;s a wonderful spectacle, laden with history and intrigue, and Eleazar has been a favorite role of singers down through the years. His great aria of introspection, "Rachel, Quand du Seigneur," is found on every respectable tenor&#146;s CD anthology. Caruso sang the part to great acclaim at the end of his career. So did famed American tenor Richard Tucker, who brought to it his own Jewish sensibility. Although he sang it in Barcelona and elsewhere, Tucker lobbied unsuccessfully for years to have La Juive mounted at the Metropolitan in New York. Management finally agreed, but before the work could be staged, the singer died.

Berkeley&#146;s Eleazar was Stephen Guggenheim, who has done the role to acclaim in Israel and elsewhere. Unfortunately, Guggenheim seemed to be suffering from a cold and struggled bravely through most of the opera. He did manage to overcome his vocal difficulties for the big number, "Rachel, Quand du Seigneur," which was beautifully delivered. Soprano Lise Lindstrom was a standout as Rachel, as was basso Ethan Herschenfeld as the Cardinal. Rachel Brott was lovely, if light of voice, as the deceived princess and Gary Sorenson made a nicely villainous Grand Marshal. But Jorge Garza simply could not find his top notes as the adulterous Prince. Unsure and unsteady both in acting and vocal ability, he made a rather sorry romantic lead, especially since Lindstrom was such a splendid Rachel.

Conductor Alexander Katsman made the most of his small orchestra, making it sound like a much larger force, sometimes to the detriment of the singers who occasionally could not be heard over the instruments. The chorus, alternately representing the bloodthirsty populace in the execution scene and a congregation of Jews, performed exceptionally well.

A concentration camp staging has been a common post-Holocaust device in staging La Juive. Productions given this year in Vienna (with Neil Shicoff, another Jewish tenor) and New York did not go that particularly horrific route. Neither did the Berkeley mounting, which stuck to period costumes and minimal antique-looking set pieces of furniture.

Nevertheless, it is just that echo of twentieth-century history that makes La Juive resonate with audiences of today. That and Halevy&#146;s music, which deserves to be taken out of the operatic mothballs where it has languished for too many years.