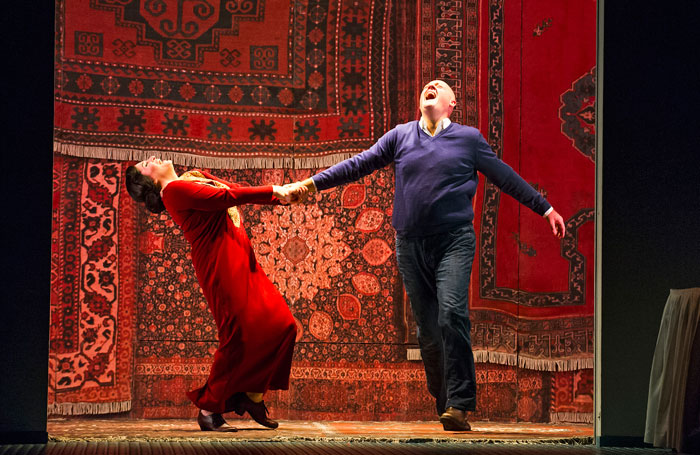 The ENO began its 2015/16 opening season with Shostakovich’s ‘tragic – satire opera’ Lady Macbeth of Mtsensk (1934) which caused Stalin to walk out during a performance and led to a scathing review in Russia’s political newspaper Pravda. Directed by Dmitri Tcherniakov and conducted by the brand new music director of the ENO Mark Wigglesworth, the London Coliseum was ablaze of applauses on the opening night by eye-piercing drama, breathe-taking vocal and acting talent, and superb musical performances from the ENO orchestra, including the maestro himself.

For the first few years after its first performance in Leningrad, Lady Macbeth became so popular – it was performed 83 times in Leningrad and 47 times in Moscow – yet, then, why did it become such a threat to the Soviet authorities? The opera, based on Nickolai Leskov’s short story, of a bored and frustrated wife Katerina Lvovnna stuck, physically and emotionally, in a misogynistic world ruled by idiotic and violent men falls in love with her husband’s employee Sergei. However on the her journey towards emotional and sexual liberation she murders her father in law as well as her husband on the way, though, the outcome isn’t what one would expect. The world is painted as Shostavokich saw Russia. As soon as the Soviet regime banned the opera Shostakovich and his music were seen as anti-establishment – an enemy of the politic-bureau, contradicting their cultural ideals.

Tcherniakov’s stage places Katerina in an isolated box decorated with exotic, red carpets. Even the way she is dressed is different from everyone else. Her box-like room is surrounded by a factory site owned by her husband’s family which is filled with vile, lascivious male workers who stare lustfully at women, especially her. Scenes are deliberately disturbing with nudity, sex and loose rape scenes yet this was the reality and rawness felt by many Russian women during the pre-revolutionary era; it is arguably something felt in Russia today demonstrated through feminist movements including the Pussy Riots.

The high tension, bleak atmosphere and pressure felt by Katerina as a wife and Russian woman is palpable in this production. Some members of the audience were in tears for Katerina while others covered their eyes when unsettling scenes felt, almost, too real.

This was taken to the next level by brilliant conducting from Wigglesworth. Although the opera is not loaded with memorable motifs or arias there isn’t one moment one could call dull or boring. In fact, it is hard to become bored with various desires and emotions taking a hold of the melodrama coupled with a powerful composition as written by Shostakovich. (The music echos some parts of his fifth symphony which he called ‘the creative reply of a Soviet artist to justified criticism.’)

The enormous orchestra of the ENO performed just as Katerina felt. For Wigglesworth, it is not simply the melancholic, climactic outbursts or the loud, brash music which stirs the opera, but the quieter choral sounds of violin and flute solos that convey the inner thoughts of the lonely, suppressed and fragile wife as well.

Patricia Racette is no stranger of singing roles about frustrated wives as she was the lead for Katya Kabanova at the ENO in 2010. Here, audiences were completely sympathetic to her and drawn in by her depiction of Katerina from her opening, heart-wrenching vocal abilities; her determination to kill her malicious father in law with a bowl of poisonous mushroom soup seemed, somehow, acceptable. John Daszak as Sergei played the missing puzzle needed in Katerina’s life, or what one may think. Sung with panache and dedication, his Sergei received pity from the audience after a bloody beating as well.

There was all round terrific performances from Robert Hayward, Peter hoard, Rosie Aldridge and Clare Presland with the steadfast ENO Chorus supporting them. Moreover, the opera seems as relatable and current as a TV drama – completely engaging. The ENO has sailed in with a highly charged and intensely gripping opera. Wait to be shocked and stunned with a performance that had me at the edge of my seat – it isn’t for the faint-hearted. One can only hope that the high standard of singing, staging and musical brilliance continues for the ENO for the rest of the season.