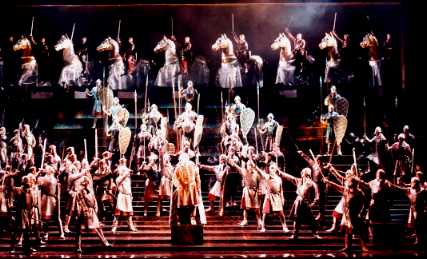 El Cid, from the Spanish/Arabic meaning lord or chief, was the nom de guerre, as it were, of an 11th century Castilian knight, Rodrigo D�az, Count of Bivar. He was commander-in-chief of the army of King Sancho of Castile and much involved in the warring factions amongst Sancho’s siblings whose father had split his kingdom between them. While some histories indicate that Rodrigo was as much motivated by personal gain as he was by patriotic fervor (an "unprincipled adventurer" says one), legend idealized and romanticized him into a great military hero and the central figure in the struggle of Christian Spain against its Moslem occupiers.

The legendary El Cid was glorified in a 12th century epic poem and further celebrated in a play by Guillen de Castro in the early 17th century. The latter was the basis of Corneille’s classic and influential 1636/7 tragedy, Le Cid, which, in turn was the inspiration for Massenet’s opera which premiered in 1885 at the Paris Opera.

The opera had some initial success and productions were mounted in the U.S. in New Orleans, New York, and Chicago, the latter in 1902. In the hundred years since, Le Cid pretty much disappeared out of the repertoire, largely, it has been said, because of the difficulty of casting it. And, in opera circles, what is not being done becomes a small vortex of rumor and speculation; there’s always a champion of a work somewhere, arguing for its revival.

With the central role a Spanish hero, and one for a heroic tenor at that, it comes as no surprise that the force known as Placido Domingo would be behind a revival after a century of neglect. Domingo, as artistic director of Washington Opera, arranged for a partnership with Teatro de la Maestranza in Seville where this co-production debuted in May, 1999. Washington Opera presented it at the Kennedy Center later that year and it was taped for telecast.

The story is a straightforward one by opera standards. Don Rodrigo (Domingo) is loved both by the Infanta (Angela Turner Wilson) and by Chimene (Elisabete Matos), daughter of Count Gormas (William Parcher). The Infanta, however, as heir to the throne, loves in vain–her unhappy conflict between love and duty is a foreshadowing of Don Rodrigo’s own dilemma. When Don Rodrigo’s father, Don Diego (Hao Jiang Tian), is appointed guardian of the Infanta, Gormas, who coveted the position for himself, insults Don Diego’s honor. Don Diego, too old to be a challenger, beseeches his son to defend his honor. Rodrigo is anguished, since his duty to his father means seeking satisfaction in a duel with the father of his beloved Chimene. It looks to be a lose-lose situation.

They duel, Gormas is killed, and Chimene begs the King to avenge her father. Even as she speaks, word comes that the Moors are preparing to attack. The King, saved by military crisis from acceding to Chimene’s request, sends Rodrigo off to lead the troops. Chimene, grieving for her father, but still crazy about Rodrigo, asks, "Am I expected to mourn forever?" and tells him that if he is victorious she will forgive him.

His troops outnumbered and surrounded, a disheartened Rodrigo prays (to his sword, due to some poor stage direction) and Saint James (patron saint of Spain, also reported to be very good with arthritis) comes to him in a vision and answers his prayers. Victory–and Chimene–are won.

All of this is delivered up in this production with elaborate costuming (reds and golds, chain mail and jeweled brocades) against a unit set which has stairs rising across the width of the stage, rising from front to back, and numerous screens with a weighty Spanish medieval feel, opening and closing to signifiy changes in location. Crucifixes abound, in keeping with the dominant place of the church in the life of 12th century Spain.

The cast is a strong one. Soprano Matos makes a sympathetic Chimene, singing with a full, rich dramatic soprano, consistently offering smooth, round tones, even when producing at full volume, soaring over the orchestra and chorus. Wilson, too, displays a fine and pleasing voice and is a convincing actress as well; unfortunately the role of the Infanta is small. One full aria sung prior to the obligatory (this is French opera) "ballet" interlude is sung movingly, though the piece feels somewhat extraneous, rather peripheral to the central goings on. Domingo is a presence of huge power and he sings Rodrigo with all the stops pulled out–to the point where it occasionally sounds like bleating. Blame that on the amplification for TV. His prayer/aria before battle ("O Souverain") and his love duet with Chimene were especially fine; Domingo remains the best actor/tenor anywhere today.

Oddly, though, the most rewarding singing of the production is by basso Tian whose aria after the insult by Gormas may be the most moving piece in the opera. It is rooted in the complexity of his character, a once powerful man weakened by age. He sings of his despair, of his shame at being dishonored, of the powerlessness of the aged. Tian’s singing and acting are right on the mark here and put into perspective what is missing elsewhere in Le Cid: the opera is more plot-oriented than character-based and the characters don’t often get under the surface. The great operatic gift of profound emotion musically expressed in the context of complex characterization is here missing that essential latter element.

What is left, then, is beautiful music beautifully sung and a bit of history told melodramatically. At least as it is here offered, Le Cid is more a pageant than great grand opera; it frequently soars, but only ocassionally moves.