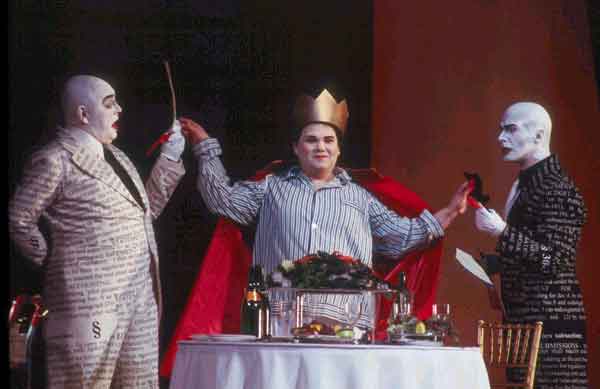 The opera is based on the following work:

Gy�rgy Ligeti (b. 1923), a leader of the contemporary musical avant garde, is a Hungarian Jew (now an Austrian citizen) who survived both Nazism and Communism. He developed what he called &#147;micropolyphony,&#148; intense and complex musical textures that blur the distinctions of melody, harmony and rhythm. Ligeti has been called a minimalist, but his music continually evolves, rendering simple classification misleading. He also has utilized an array of speech sounds and nonsense syllables in his work; these are noticeably present in his only opera to date, Le Grand Macabre (premiere 1978), loosely based on a play by the Belgian author Michel de Ghelderode.

Le Grand Macabre is musical theater of the absurd, not unrelated to theater works of Beckett, Genet, and Ionesco. Its central subject is mortality and its central character is Death, in the form of the character Nekrotzar (bass-baritone Willard White), who arrives in a city of skyscrapers, its streets strewn with litter and populated by vagrants, and announces that the world will end at midnight. That description portends a grim work of deadly seriousness, but Ligeti translates it into farce, in the tradition of commedia dell’arte and with a nod to medieval morality plays.

An assortment of characters, exaggerated into caricature, include Piet the Pot, a winetaster by trade and a drunk by behavior; Amanda and Amando (Clitoria and Spermando in the original – do San Francisco audiences really need protection from such words?), a couple blissfully in love and lust whose duets are the musical highpoint of the opera; Astradamors, the royal astrologer who is a sex slave to his housekeeper, Mescalina, who, in turn has a lusty go with Nekrotzar himself. Equally in the satirical vein are a couple of politicians whose debate takes the form of alphabetical name calling (with "girlyman" thrown in for a timely reference. The puppet Prince Go-Go is sung by a countertenor (Gerald Thompson) and the Chief of Secret Police, Gepopo, requires a virtuoso coloratura, here dazzlingly sung by Caroline Stein.

The music is as much a pastiche as the libretto, from its brief overture, an amusing mixture of rhythmic sounds scored for a dozen car horns, to the closing Passacaglia in somewhat mock classical style, sung by the principals lined up at the front of the stage with a humorous bit of business with the descending curtain. The San Francisco Opera production, the opera’s American premiere, originated at the Royal Danish Opera. It’s a brilliant mix of influences, from the comic book images of Lichtenstein to the dizzying prints of Escher to the bizarre imagery of Brueghel.

The incredibly diverse influences, both musical and textual, that Ligeti has brought together in Le Grand Macabre create a field day for the erudite commentators, but many of his allusions will not be caught by the more general audience. There’s no denying that it is a thoughtful work, replete with irony and ambiguities, its deadly serious message lightened by its humor. But the plot line lacks any significant narrative momentum, the characters are schemata rather than real people, and, in the end, the pieces don’t cohere into a satisfying whole. The music is only fitfully satisfying at a visceral level. In all, the whole seems to tally up to something less than the sum of its parts.