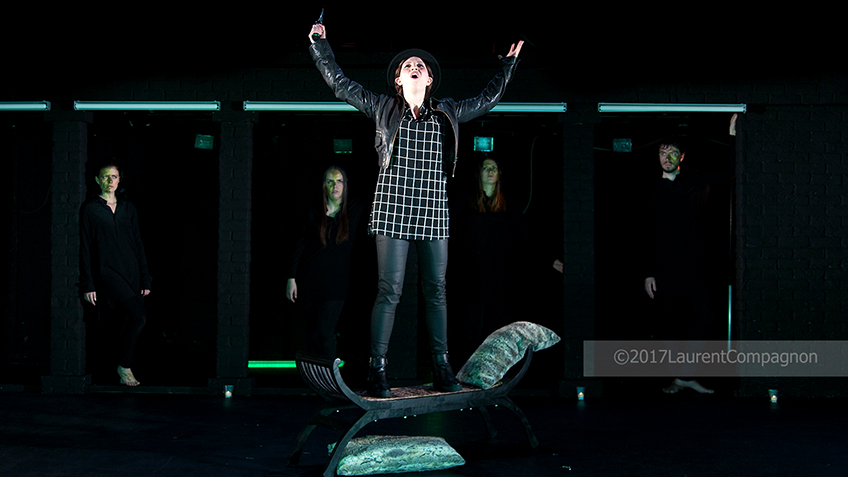 It’s a bunch of firsts for the Hampstead Garden Opera and their new production of Claudio Monteverdi’s marvellous opera L’incoronazione di Poppea. Hosted at the Jackson Lane Theatre, it is the first time they are performing with surtitles and asking their 12 young soloists to sing the opera in its original Italian language.

To coincide with the 450th anniversary of Monteverdi’s birth, his masterful opera of power, greed, and lust seemed most apt, and it is to the delight of their impressive singers that the production doesn’t feel like an amateur’s feast, at least that is what I felt when I saw it on Friday night.

The soloists are also accompanied by musical director Oliver John Ruthven who strikes a balance between strong voices and the dedicated ensemble, Musica Poetica – a small orchestra of eight musicians with expertise in period instruments including harpsichord, theorbo, harp, viola da gamba, violins, and violone. Put together this makes for an exquisite evening for any Baroque devotee.

Directed by Simon Iorio, it is a step forward for Hampstead Garden Opera as they prepare their singers to perform opera in an integral way. One thing to be aware of is the significance of the era L’Incoronazione di Poppea was first created – roughly around the same time it was first performed in 1642 – when opera was brand new and not performed in the same way as it is today. It’s based on historical events, different from Monteverdi’s other mythological operas. He was also lucky to have his libretto written by Da Ponte’s literary forefather, Giovanni Busenello.

“The opera is a story about loss of all reason in a quest for power” says director Simon Iorio. Emperor Nerone’s mistress Poppea is manipulative and aware of her seductive powers over him that she attempts to rise as the new empress of Rome, while the petulant, spoiled and indulgent Nerone cares for nothing else but his own self-gain. Yet the philosopher Seneca tries to reason with Nerone, which leads to destructive consequences.

The positives of the production lies in the clear portrayal drawn out by its soloists. Vocally impressive Leslie Davis performs the trouser-role Nerone as a polished, cool and confident emperor. In a suit, Davis’s Nerone looks like the stuff of a gentleman, but just with a dark desire to rid his current empress for sultry Poppea.

Clara Fournillier’s Poppea is minx-like and sharp. Performing mostly in black lingerie with lush long hair, her strong vocals and acting bravado makes her an excellent match for Poppea.

The prologue for L’incoronazione di Poppea is always amusing with La Fortuna, La Virtu and Amore disputing over who has the most power of humanity. Jessica Thayer, Angelica Conner and Charlotte Levesley keep the scene light, entertaining and fun, singing parts, which are not the easiest to sing.

There’s also tender singing from Collin Shay worth praising. His countertenor voice as Ottone brings the opera to a pause with its dazzling textures, particularly when he sings to Poppea, which pulls on your heart strings. And bass-baritone Benjamin Schilperoort as Seneca is raw and ready for the role. Singing as the voice of reason, his voice is authoritative, yet sung with emotional conviction, enough for audiences to pity him and his plight.

For me, it was Swedish and Norwegian mezzo Eira Sjaastad-Huse who was my favourite. Her embodiment of the neglected empress Ottavia is captivated, more so is her voice, which is alluring and a pleasure to hear.

Ele Slade minimal’s staging includes no more than a few blinds and moveable furniture that is quietly moved in and out of the stage. This doesn’t act as a hindrance, in fact, it’s more air-time for the soloists which is even better.

In the final scene, after much pleasuring between Nerone and Poppea, their duet Pur ti miro is no longer sung the same way as the opera begun. As history tells us, Poppea didn’t have her happy ending and shown through Fournillier’s anxious and terrified look, we only wished that the opera had been extended to see the bloodshed that befell her.

HGO’s L’incoronazione di Poppea is oozing with lust, seduction, and the divine, including sublime singing and superb performances from Musica Poetica. I would go as far as saying that if Monteverdi were alive, he would have been pleased with this performance. For any Monteverdi or Baroque music lover, it is their mission to see this opera. They’ve got until the May 21st to see it.