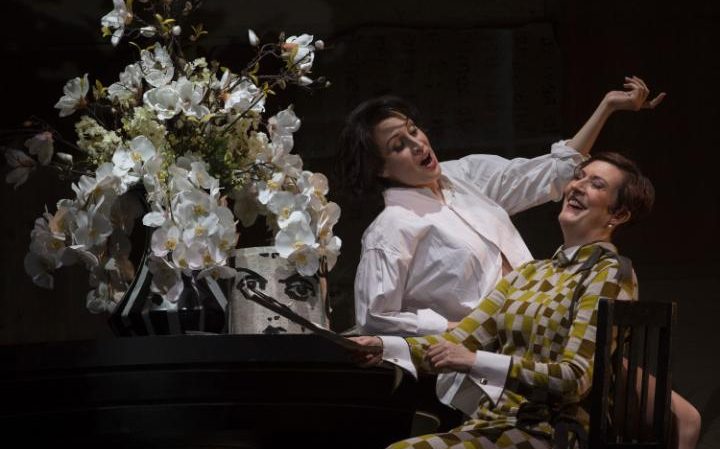 This week is another tasteful and satisfying evening out at the ENO. It is also the second time the ENO has presented a revival work, following The Pearl Fishers that went down a treat in New York’s Met opera house last year, and was also shown in Amsterdam as a co-production with Dutch National Opera. The formidable artistic director William Kentridge has brought his magnetically animated production of Berg’s Lulu to the ENO stage, and for an English conversion it seemed to work so, so well.

Alban Berg didn’t live long enough to finish his three-act opera, and it was in the hands of Friedrich Cerha to complete the final and most ghastly act where our lead character is murdered by London’s mysterious killer – Jack the Ripper.

The narrative of Lulu isn’t, at all, complicated, yet the musical mastery of Berg’s score shows the depth of his innovation, out of the Second Viennese School, with expressionist composers Arnold Schoenberg and Anton Webern. Berg wrote his second opera, after a successful Wozzeck, during a time in Germany where women were repressed, and writing Lulu was his escapism.

This modern opera (1937) is atonal and remarkable for a narrative filled with diverse voices; brimming with scandal, mistresses, clandestine relationships, sex, blood, and suicide. That said, everything is left to the audience’s imagination in Kentridge’s stylish production; you may see underwear and legs, but hardly a sight of nudity – the projections do the work.

Lulu, an alluring, yet brazenly sexual woman is loved and lusted over by many. It is her sensuality and seductive powers that bring her admirers down, yet as the opera progresses audiences see that it is the essence of her ultimate demise as well.

The production has various dynamic parts and components happening at the same time. The stage is a party of all sorts: mime, moving imagery, strong visuals, projections of expressionist artwork, thick paint marks, and a rainbow set that perfectly sits within the 1920-30s vintage style and couture. Audiences applauded Kentridge, Sabine Theunissen, Greta Goiris, Catherine Meyburgh and Urs Schöenbaum for their creative achievements at ENO’s opening night.

Mark Wigglesworth drains out the best he can of the ENO Orchestra as it is his last performance as ENO’s music director. The orchestra sets in motion a buttery, rich and unbroken interpretation under the baton of an exceptional conductor.

Having seen Marlis Petersen, who had mastered the role of Lulu for 20 years, at the Met Live production last year, it is hard to compare American soprano Brenda Rae for her own vigourous interpretation of the title-role. Lulu is a challenging and tough role, but Rae is consistent. Ready for each scene, she has vocal charm, yet it would have been nice to see something that stood out in her performance – something she could call her own. All of Lulu’s admirers – Countess Geschwitz, a schoolboy, painter, athlete, animal tamer, Dr. Schön and Schigold – are performed by sublime soloists, Sarah Connolly, Clare Presland, Michael Colvin, David Soar, Nicky Spence, James Morris and Willard White.

Joanna Dudley gives a fine performance as the symbolic mime figure of Lulu’s alter ego. While Lulu arouses Dr. Schön’s son’s Alwa, Dudley distorts her body, opening her legs but holds them in the air for minutes, suggesting she is ready to commit adultery on the same sofa her second husband bled to death. Andrea Fabi is also a bold mute figure from a black and white film that acts like a butler to the stage, helping the characters along with the narrative.

This is a unique and tenacious production, worth seeing, but it is three hours and 40 minutes long. The ending may receive some mixed opinions and the opera won’t be to everyone’s taste, yet why stick to what you like and know? Try something new and get a ticket to a unique opera which will give your brain an opera orgasm.