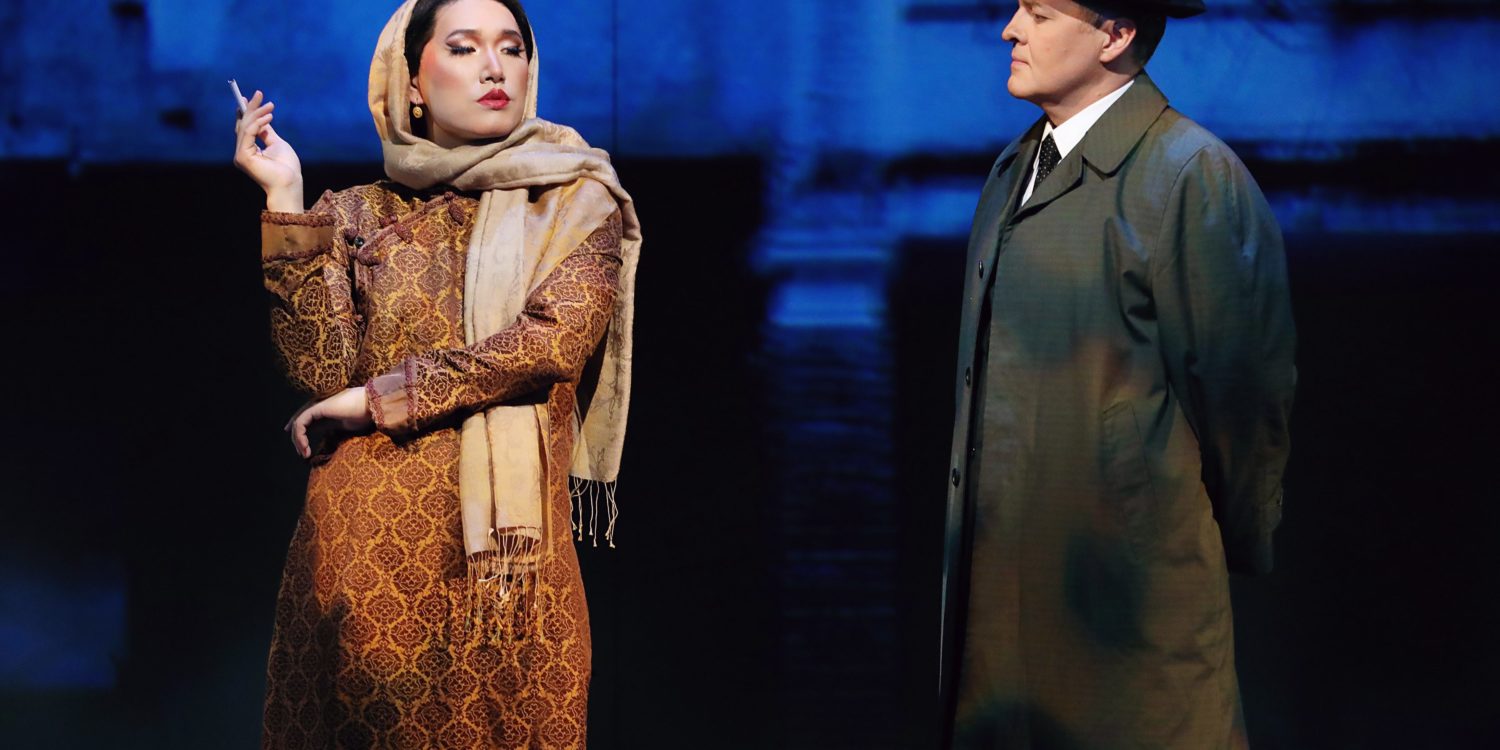 David Henry Huang’s libretto for “M. Butterfly,” the world premiere opera that opened in Santa Fe on July 30, is part of a, by-now, well-oiled narrative machine. There was his original Tony Award-winning production of “M. Butterfly,” the play, on Broadway in 1988, a Broadway revival in 2017, and a film, directed by David Cronenberg, with Jeremy Irons and John Lone playing the leading roles, in 1993. The question, for opera fans, is whether the musical score by Huang Ruo, a multi-faceted young composer from China, does justice to this high-art musical version of a love story between a French Diplomat and his Chinese lover, who turns out to be both male and a spy.

Ruo is a Juilliard PhD composer who says he draws equal inspiration from Chinese ancient and folk music, Western avant-garde, experimental, noise, natural and processed sound, rock, and jazz. However, knowing his audience, Ruo’s new opera in Santa Fe is less avant-garde than grand-sounding with a twist. There was plenty of orchestral lyricism for traditionalists to rest in, but plenty of modern voicing, especially in the vocal lines for the two leads, the baritone and countertenor, Mark Stone and Kangmin Justin Kim, respectively.

Ruo’s score quotes liberally from the Puccini “Butterfly,” especially the soprano aria, “Un Bel Di.” Kim offered a gorgeous sound to these sections. In fact, the vocal illusion offered by Kim’s singing was as completely believable as his gender-switching performance as a woman. Other places in the piece helped illustrate the evolution of the Son Liling character, musically, while Stone, the Westerner, was portrayed in a much more stodgy and unsympathetic way.

Just as Santa Fe’s new production of “Carmen” this summer was directed by Mariame Clément as a feminist revision, this “M. Butterfly” has had a re-do based on changing attitudes about gender and trans rights. The role of the chorus in the Ruo/Huang collaboration is mostly to portray chic Parisians laughing about the jailed René Gallimard. The question of the hour—how did he not know that his lover had a penis—is treated as a main subject of the libretto from the early moments of the opera. Perhaps in the future, a different production could prioritize ideas about East/West dynamics and the geo-politics of the Viet Nam era, and deemphasize the obsession with sexual deception.

Starting with Gallimard’s cavalier attitude toward monogamy (his wife is presented on stage as a silent, attention-starved blonde), the Frenchman’s side of the story is offered as a kind of pathetic infatuation with the “other.” When this is juxtaposed with history—the Chinese Cultural Revolution as rationalization for Liling’s reinvention as a spy (he is chillingly warned by his female Communist handler Shu Feng, sung by Hongni Wu, ‘homosexuality does not exist in China’ ) we have two leading characters portraying a great love that is full of holes.
This is not the same straightforward immorality of Puccini, where the Anglo simply casts off his time of Japanese escapades in order to enter his rightful place in American society, and Butterfly is left to die. Like sexual dynamics today, things are a lot more edgy and contradictory here.

The visual look of the opera, framed as it is with a backdrop of sunset on the Jemez Mountains, is enhanced by projections (by Greg Emetic) which add architectural details signifying the settings (Beijing and Paris) and also broadcast time frame (the story jumps around in time) and even maps showing China’s proximity to Viet Nam. Although Liling comes from the world of Chinese Opera, that spectacle is left to the imagination while the Cultural Revolution is illustrated with a full-on army of Mao followers in olive and red, a denunciation scene with Liling on a pedestal being publicly humiliated, and a ballet with Red Army soldiers dancing with bayonets.

Moments in the final act feature beautiful backstage choral singing, and the ritualistic ending, right out of Puccini’s Japanese fantasy world, is effective. But the love at the heart of the opera never seems believable. There is too much foreshadowing from the very beginning to ever believe, when the two leading players are together, that there is a relationship developing there. And despite the dramatic impact of full frontal nudity, the penis at the center of this opera is not the earth-shattering revelation that it would have been decades ago, when the actual story took place. Some things are better left unseen.