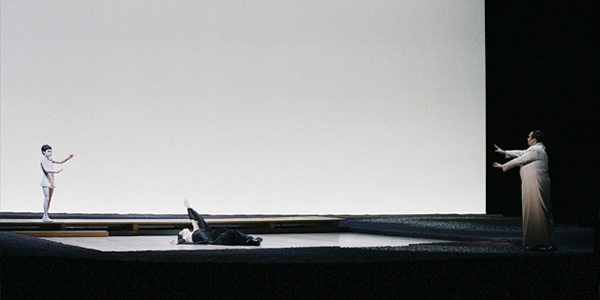 You know you’re in trouble when “Un Bel Di Vedremo”, one of the most moving arias in Opera, leaves you cold. But coldness is all you possibly can feel from Robert Wilson’s staging of Puccini’s Madama Butterfly at the Paris Opera. And it seems this is what he was going for with the production. The cavernous stage is used to full effect to create a sense of absolute emptiness and desolation. The lighting by Wilson and Heinrich Brunke is icy and exhausting, harshly exposing the characters to unforgiving scrutiny, an effect compounded by Suzushi Hanayagi’s choreography, which has them move at a deliberate snail’s pace to and fro around this vast, empty, cold, space.

Wilson’s self-designed set certainly reflects thematically the sense of desolation and abandonment central to Puccini’s opera (based on a play by Davi Belasco, itself inspired by a novel by John Luther Long), which has a young Japanese girl married, impregnated, and left behind by a largely uncaring American businessman and sees her wait virtuously for his return in spite of everyone’s insistence he’s not coming back. Wilson does everything in his deliberately minimal repertoire to strip back this world to the raw drama at its core and create a sense of a rigid society full of stoic, static people in which the one spark of hope comes from the naiveté of a young mother.

It’s such a heartbreaking story and the music is always so stunningly affecting that it seems impossible to miss with it. Yet Wilson, seemingly trying to deliberately counter-act the pleasure of representational set and costume design, ends up undermining the emotions he seeks to expose. It is not difficult to see the aesthetic strategy here, and we could talk about Brecht, or maybe Berkoff, and no doubt get tremendous academic mileage from repacking what Wilson has so evidently unpacked, but as one sits there fighting sleep and hearing Cheryl Baker’s rendering of “Un Bel Di Vedremo” completely and utterly fail to engage the emotions, it becomes evident that Wilson has made it such hard work to experience this opera in his hands that it’s not really worth it.

This is really too obvious a trope – empty the exotic of exoticism – present bare emotions in a bare space with bare costumes and stark lighting. The result is not a greater appreciation of the text, and certainly not of the music, which though well presented by Vello Pähn and the vocal cast simply has nothing to hang onto – why not just listen to it on CD? It simply robs the audience of a richness of experience in favour of academic minimalism. If this is your bag, then the production will no doubt rank among the greatest mountings of Puccini you’re ever likely to see, because it is so precisely well executed that one can’t argue with its excellence in realisation. But if you want to come out of an Opera having felt moved, or at least involved, you’re not offered this here.