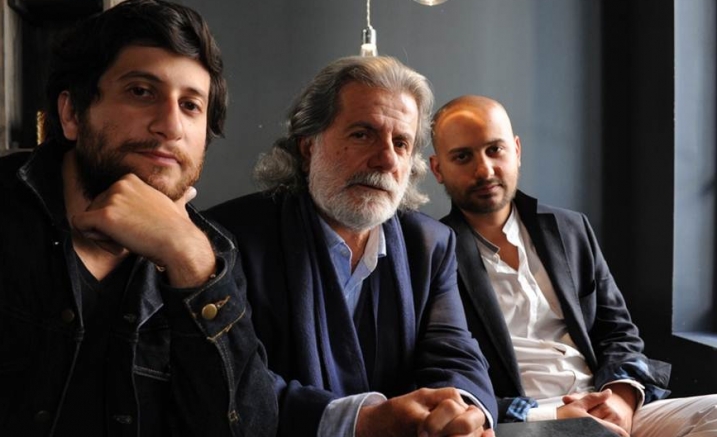 Bachar Mar-Khalife
Ya Balad
infine
IF 1033

The first time I saw Lebanese-French pianist-composer Rami Khalife and Syrian clarinetist-composer Kinan Azmeh play together was in 2006 at La Pena in Berkeley where I had a revelation. Music is first and foremost sound and everything we think about it later is just thinking. ( Improv Heaven www.sequenza21.com )

These things came to mind when I caught the truly iconic Lebanon-born Paris-based oud-master-composer-singer Marcel Khalife ( b.1950 ), and his Paris-based sons Rami ( b.1981) and pianist-percussionist-singer Bachar Mar-Khalife ( b.1983 ) on the fifth stop of their seven city 2016 US tour sponsored by the American-Arab Anti-Discrimination Committee. We like to think that the Middle East is a “hot mess” as if we could just sit back and do our nails because we’re — well — superior, but music always clarifies our shared humanity. We can debate the strengths or faults of Schoenberg’s New Vienna School’s 12-note system, but if music doesn’t touch you what’s the point? And the music here was both necessary and uncommonly beautiful.

It’s always risky to open a concert with a serious piece but Rami Khalife did just that with his “Poem” which sounded clear, magisterial, and impossibly deep on his Steinway grand, and he has obviously leaned a lot from Bartok’s last student Gyorgy Sandor, who always stressed “sonority “. Rami’s sonorities here, whether loud or soft, were rich and inc varied — massive one moment, unbearably delicate the next ,his technique classical, modern, secure. All music is rhythm first, melody second, and harmony third. We can debate this for hours, but that’s what it is.

We like to think that the double bass in jazz keeps everyone in “on the beat”, but Bachar underscored his brother Rami’s “breaks ” with his drum kit which made a joyful noise unto the Lord as the Hebrew Bible would say. A cajon and many other sound makers from a dumbeck to a dudek competed for pride of place,

Americans, whether they say so or not, are always more than ready to sweep the last thing , be it a “moment”, or a person under the rug, but Marcel Khalife has always resisted easy answers. He just keeps playing no matter what it “costs “, and his two enormously gifted sons, though elaborately trained in both Lebanon and France, doesn’t stop them from providing the solid rhythmic floor over which his uniquely expressive voice soars in songs he’s made from poems by the late great Palestinian poet Mahmoud Darwish (1941-2008). and others less well known.

Does music change us? Well yes and no. But the moment’s change is in good hands with Marcel, Rami and Bachar Khalife, and their simple and complex rhythms here — some in fives — made everything come alive, and what better feeling helps us get out of the theatre and into the street?