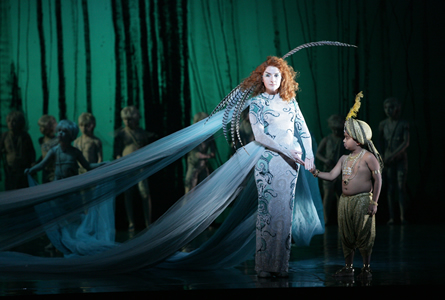 Houston Grand Opera continues its stride with year two of their six-year Benjamin Britten cycle with their enchanting production of A Midsummer Night’s Dream. Combining Shakespeare and opera comes with a set of dilemmas, such as how to edit, add, and hopefully not mess with the Bard’s impeccable sense of structure. And for all purposes, Britten managed to frame his Midsummer in a way that does the least harm to this famous play, even adding a line to make it all work. Extra credit for that.

Neil Armfield directed with eye for the dominance of the fairyland and for the more subtle ways a Britten opera plays out. The pacing of the first two acts felt a tad tedious, but the action and fun picked up in the final act. Dale Ferguson’s sets and costumes conjured a pastoral dreamscape, and a stern geometric Athenian world, visually balancing logic vs. nature. Ferguson frames his enchanted forest under a flowing, breathing sea green cloth, evoking a fluid and watery mood—a good reminder that we have left the world of law and logic. The HGO children’s chorus, under the director of Karen Reeves, added wonder and whimsy. Patrick Summers and the HGO Orchestra brought Britten to life with a crisp and subtle performance. Even Buddy, a sheepdog making his HGO debut, managed to bark on cue and on pitch. How’s that for magic?