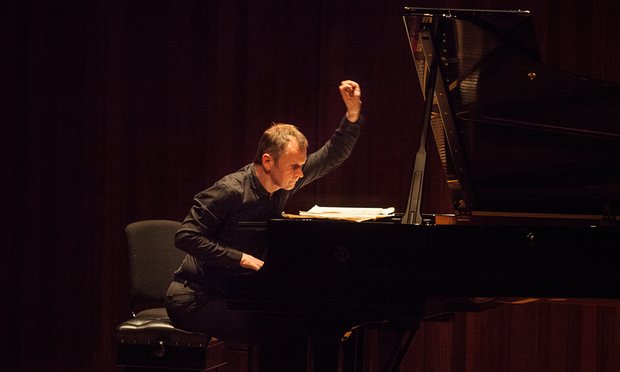 “The music is not in the notes, but in the silence between”

This quote from Mozart seems particularly apt for Steven Osborne’s recent concert at London’s Milton Court which featured music by Morton Feldman and George Crumb, two radical American composers with a special interest in exploring the piano’s expressive qualities as much through the spaces between the notes as in the notes themselves. Eschewing melody as the main vehicle for expression in their music, both Feldman and Crumb offer the listener a special soundworld infused with simplicity and stillness. Steven Osborne’s interest in stillness in music combined with his ability to produce magical kaleidoscopic shadings, as evidenced by his very fine performances and recording of Messiaen’s “Vingt Regards sur l’enfant Jèsus”, make him the perfect performer for this program.

Silence in music, any music, is very important. Pauses and silences provide “punctuation marks” and create ebb and flow, just as in speech. Silences also create drama and set up expectations in the minds of the listener, while stillness and quietness in music allow the performer to draw the listener in to create special and sometimes very personal connections. In the pre-concert talk, Steven Osborne spoke of how, as a child, he liked to experiment at the piano to see how quietly he could play, fascinated by the tactile experience of producing very soft sounds. He described how the simplicity and stillness of Feldman’s music in particular – music which is sometimes merely a handful of notes or a few carefully chosen chords with no clear narrative nor organic development – allows the listener to engage with the music “in the moment”, with a mindfulness akin to meditation without the need to conceptualize nor admire it as an “art-object”.

In his performance of “Palais de Mari”, Feldman’s final work for solo piano, Osborne’s musical sensitivity and exquisite tonal control allowed each note, each sound, and each memory of those sounds and the silences between them, to be revealed with a rare and intense beauty that engaged the listener from the very first sound and demanded concentrated and reflective listening. Despite the slowness and hushed serenity of the music, there were no longeurs and little sense of time passing. At the end the audience remained silent, absorbing what we had heard and allowing the memory of those delicate, mystical sounds to hang in the air, even after the last note had sounded.

The works by George Crumb provided the perfect foil to the veiled sounds of Feldman. “Processional” is just that: a broad unfolding of pulsing gestures over a drone which rises very gradually, overlaid with flickering melodic fragments which expand the range to the outer limits of the piano’s register. Crumb was fond of nature and enjoyed walking in the woods of West Virginia where he lived. “Processional” feels like a slow walk in a forest of towering trees, with occasional disembodied interjections from forest wildlife: the chirruping and scurrying of birds and small animals. Osborne’s control never faltered, and the experience was as intense and absorbing as the Feldman.

In Crumb’s “A Little Suite for Christmas”, seven miniatures which create an “aural tableau” inspired by Giotto’s frescoes in the Arena Chapel at Padua, Osborne delved inside the piano to employ Cage-inspired effects such as strummed strings, damping, sliding, and tinkling bells, while from the keyboard itself he conjured vivid colours and glittering note clusters redolent of his performances of Messiaen.

There was no applause between the works in the program, as requested by Osborne to enhance the meditative qualities of the music, and at the end of the concert the audience remained silent while the pianist lifted his hands gently from the piano, gathered up his scores and left the stage quietly. The applause when it came was modest yet wholly appreciative for a performance of great subtlety and concentration, every note perfectly, beautifully and sincerely placed to allow myriad sounds to emerge out of silence.

Steven Osborne’s new recording of works by Morton Feldman and George Crumb is available on the Hyperion label.
http://www.hyperion-records.co.uk/dc.asp?dc=D_CDA68108

An earlier version of this review appeared on Bachtrack.com