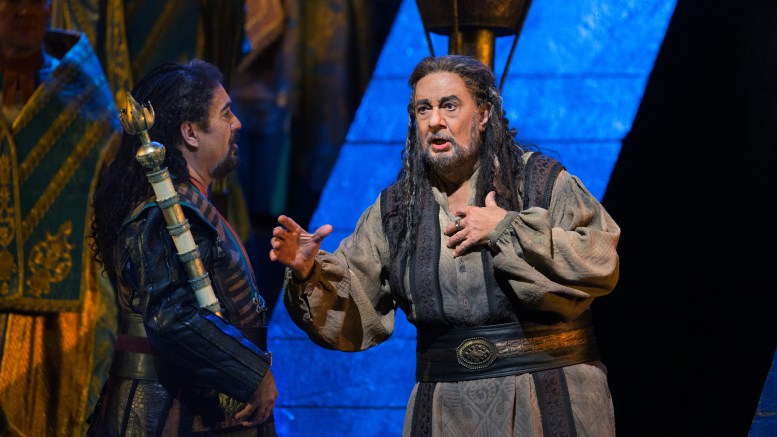 Verdi’s “Nabucco” could be conceptualized as the protest opera for all seasons. It premiered in 1842, when Giuseppe Verdi was 28 years old, and Italy was a loose confederation of city states dominated by foreign powers, especially Austria in the north. “Nabucco” became the rallying cry for Risorgimento, resurgence. It was a young man’s warning against the power of the northern neighbors, and an early cry for Italian unification. “Let not thy people fall to a madman” is the call heard early in Part I. It takes little imagination to apply that caution to times including the present.

“Nabucco” is the story of the Assyrian King, Nebuchadnezzar, who came in 587 B.C. with his armies to desecrate Jerusalem, kill the Israelites, and destroy the Temple of Solomon. This co-production of Washington National Opera, The Minnesota Opera, and Opera Philadelphia conceptualizes it as a classic presentation, replete with columns and gilt. It is being viewed by a frivolous nineteenth century audience, with a glimpse of oblivious backstage characters engaged in various activities extraneous to the opera. We are to imagine they are viewing “Nabucco” at La Scala. It is an opera within a play. Although not always successful, it is an interesting device in that it makes the point that to ignore history is to repeat history. Unfortunately, there are moments one finds oneself concentrating more on figuring out what the supernumeraries are doing than attending to opera itself. The Chandler stage is cavernous; scaling it down in this manner can be effective when an opera has very few characters, however “Nabucco” is a chorus driven work and it is odd to crowd the magnificent LA Opera Chorus into a smaller space.

This review is based on the November 2 performance. It built from a somewhat scrappy Part One to a powerful conclusion and epilogue. Although Morris Robinson’s commanding Zaccaria and Liudmyla Monastryrska’s equally powerful Abigaille were outstanding from the get-go, Placido Domingo’s Nabucco was less than attention grabbing at first, a disappointment that he corrected as the performance went on. In this performance, the chorus of Israelites did not appear so much trapped in the Temple, as wondering if they were standing in the right places. Even James Conlon, whose conducting is usually so supportive of singers, seemed to overpower them.

With the exception of Mario Chang, Ismael, all regained their footing in Part II and rose to the heights of Verdi’s youthful masterpiece. Poor Ismael, Chang was like a lost puppy in comparison to the Robinson/Monastyrska/Domingo powerhouse. With a weak voice and little theatrical flare it was hard to imagine his capturing the hearts of the emperor’s two daughters.

Let us put aside the quibbles about staging. The music is glorious. Driven by the almost constant presence of the full bodied chorus “Nabucco” puts the grand in grand opera. It is hard to say enough about Liudmyla Monastyrska in her LA Opera debut. She embodies the classic ideal of a diva, with modern attention to acting. It comes as no surprise that she has played Tosca and Aida in major opera houses, nor that she is about to play Norma. Morris Robinson has frequented the Chandler stage, however the role of Zaccaria gives this extraordinary basso a rich showcase.

The most familiar theme from “Nabucco” is the chorus of the Hebrew slaves at the end of Part IV, “Va, Pensiero” – Go Thoughts, or Hasten Thoughts. It cannot help but evoke reflection on the current political environment. Lest you be tempted to take your heavy heart quickly to escape from the parking lot. Don’t. Stay for the entire curtain call; you will thank me and I do not want to ruin it for you.