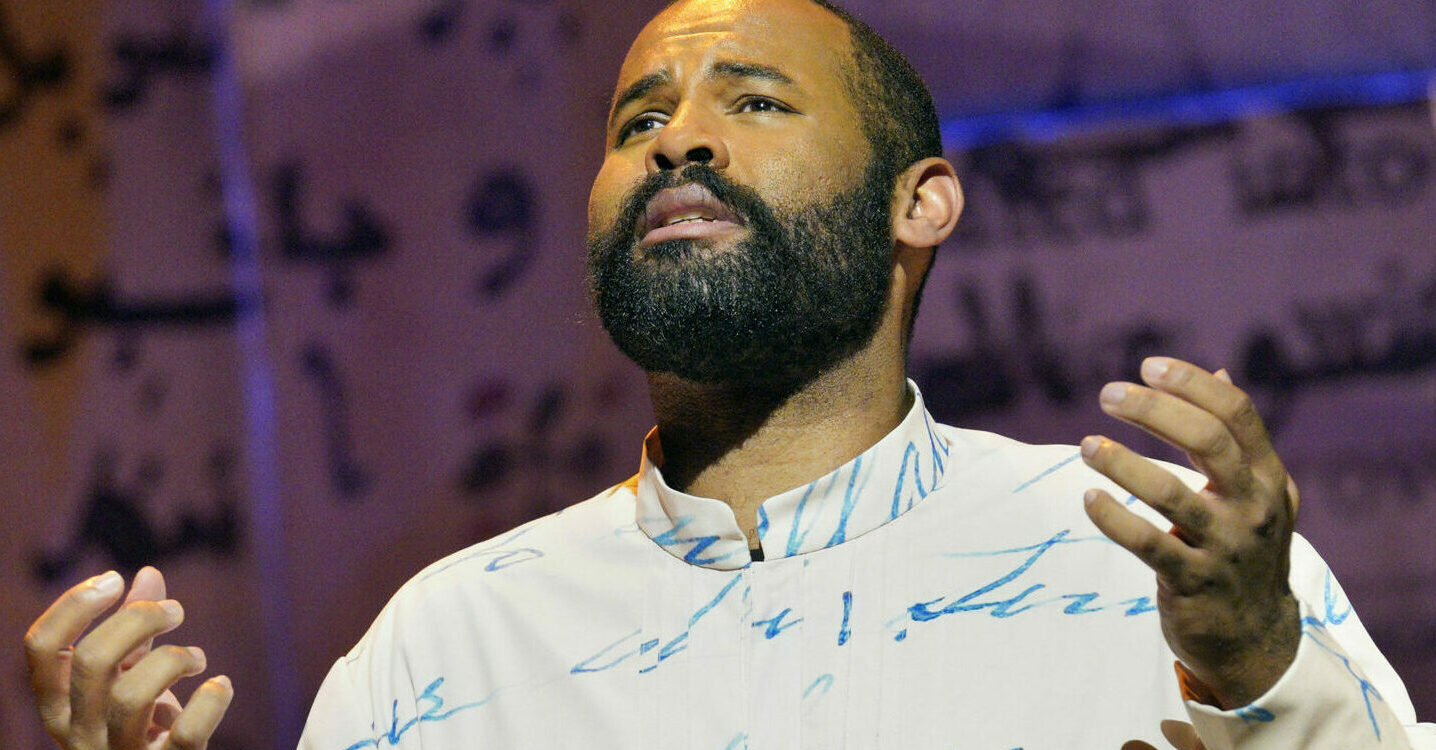 Omar, a triumph of the Spoleto Festival, USA, has landed on the Chandler stage with a bang. The first thing that strikes you are the voluptuous production and costume design. Yards of fabric imprinted with Arabic calligraphy—Omar’s own words– and miles of heavy rope are variously draped to loosely signify everything from Omar’s West African homeland to indignities of jail and two plantations. Omar (Jamez McCorkle) stands center stage in khaki shorts and a black Alice in Chains tee shirt. Slowly, today’s everyman is draped in robes imprinted with Arabic, and the chorus which emerges from an abstract field is bedecked in colorful layers of fabric. It is Africa 1806. Omar’s village is a harmonious community musically and individually. In the end Omar strips off his robes. He is 21st century everyman under the indignities of slavery.

Omar Ibn Said is at peace in his West African village. He is 37 years old, wealthy, and a respected Muslim scholar. But his brother, Abdul (Norman Garrett), interrupts the tranquil scene with news that a neighboring potentate is planning to sell them all to a slave trader. His mother, Fatima (Amanda Lynn Bottoms), a respected matriarch and spiritual figure in the community, has warned him that life will not be filled with the tranquility Omar treasures. He has refused to face the reality.

Reality hits him in the face. He is purchased by a wicked plantation owner (Daniel Okulitch). Unable to tolerate the brutal treatment he heeds the advice of an escaping slave. He too escapes and heads to Fayetteville. Captured along the way he is imprisoned. He covers the walls of his cell with Arabic script which catches the eye of another plantation owner’s daughter who cajoles her father into buying Omar.
The new owner is also played by Daniel Okulitch, a deliberate double casting meant to convey that slavery in any guise is still slavery. The kinder owner has an ulterior motive. His bet is that he can take this literate slave and convert him to Christianity. Omar plays along while he inspires other slaves to follow Muslim roots.

Omar may not be such a familiar figure to most Americans, but the story of Africans being betrayed into slavery, often by other Africans; the miserable “middle passage” across the Atlantic where a large percentage died; the inhumanity of being sold like livestock once they land on American soil; that story should be familiar to all. What is unique in Omar’s story is that he was literate in Arabic. And he was a philosopher. He wrote a brief autobiography of his life after arriving on these shores. The autobiography forms the core of Rhiannon Giddens story telling. The prelude is Gidden’s presumption based on the known history of West African natives. Omar spent the rest of his life a slave, but he was allowed to write. He wrote a number of books in addition to his autobiography.

Giddens has won the MacArthur Genius Grant; two of her folk albums have won Grammys. Trained as an opera singer she has functioned instead in the world of folk and country. After writing the Libretto and much of the musical line she brought Michael Abels on board, primarily to orchestrate. Though he had never scored an opera he had a successful track record composing film scores such as Get Out. The music reflects both the feel of African rhythms and slave voices while not really being either. Giddens did not want to use either African instruments or banjos because she wanted this to be a score that could be played internationally, a decision that might be worth rethinking.

The production is stunning. The huge, ever present chorus matches the visual drama. Some have said that Omar will displace Porgy and Bess in the Opera cannon. I think it definitely deserves a place, but Omar does not reach the heights of Gershwin. Must the rush for diversity push aside what ever came before? Yes, Porgy and Bess was written by a white guy. Isn’t there room for both? Go. Drink up the visual delights and the spectacular chorus in Omar, but don’t forget Porgy and Bess.