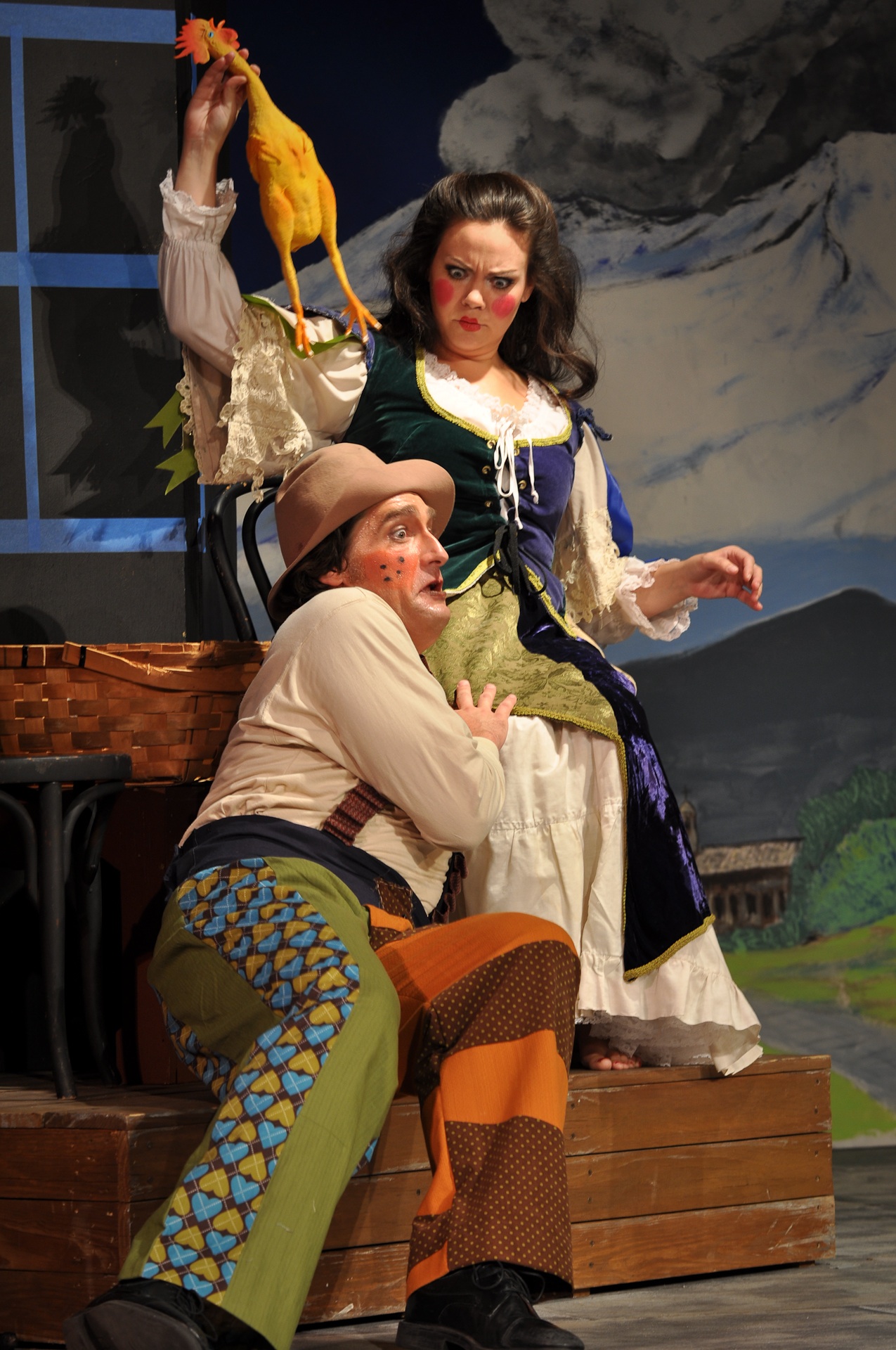 When I saw a man strolling down the aisle toward the stage, I figured he was a latecomer. Turns out, he was part of the show and I’m the late one, by some 13 years, because that’s how long it has taken me to check out what all the fuss has been about over Opera in the Heights (Oh!) And from the looks and sounds of their recent productions of Giacomo Puccini’s Il Tabarro and Ruggero Leoncavallo’s Pagliacci, it’s a well deserved fuss.

Pagliacci is usually paired with Cavalleria Rusticana, but traditionally, if you needed third, Il Tabarro is the likely third piece. There’s a chemistry in the Tabarro/Pag match-up; both are stories about jealous, older husbands with straying wives, that end with dramatic crimes of passion. In the Oh! Experience, you get to see the same singers in different roles, which creates a marvelous showcase for this talented group of artists.

Oh! is all about the quality of singers; sets, costumes and lights are minimal and supplied on an as needed basis. One doesn’t go to see some slick new designer re-do Aida. You go to hear the nation’s best up-and-coming singers up close and three feet away from your ears. Singers are everywhere, in the aisles, the balcony and off stage. This is  surround sound opera.

One-act operas generally take a let’s get to the plot lines quickly approach, and Il Tabarro is no different. It’s a quaint tale of a restless young barge wife who seeks love and adventure elsewhere. Pagliacci tells a similar tale in Nedda’s hope for another life through Silvio, a young peasant. Greek soprano Crystallia Spilianaki bestowed Giorgetta with subtle grace and a sparkling tone. As Nedda, she pulls out a fiercer quality, better suited to Nedda’s more frivolous ways. Baritone Douglin Murray Schmidt commanded the stage as the stern Michele. As Tonio, he’s a devious charmer, and quite convincing in his slick suit in lieu of a Commedia dell’Arte costume in the cautionary prologue. Tenor Scott Six, making his Oh! Debut, also demonstrated dimension playing Giorgetta’s suffering lover Luigi in Il Tabarro and Canio, the jealous clown in Pagliacci. Six knocked it out of the park, or the Heights, in the famous “Vesti la Giubba” aria. George Williams gave a solid performance as Tinca, a deckhand. Nancy Markeloff’s delivered an animated and lively performance as Frugola, Talpa’s wife and a troublemaker. Yoonsang Lee convinced as Silvio, Nedda’s true love in Pagliacci,

Oh! performs in the cozy Lambert Hall, where every seat is a good one. The audience feels part of the action. Never in my life have I been this close to opera singers. There’s an intimate scale to the entire event. Conductor and Oh!’s artistic director William M. Weibel and the orchestra may be tucked away in the corner, but they too, sounded terrific.