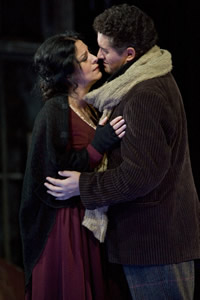 Paris, poverty and passion; they always seem to go together but never quite as beautifully as in Puccini’s “La Boheme.” A combination of glorious soaring melody and a story of love and loss that brings an involuntary tear to the eye no matter how many times you see it, “Boheme” would probably head a list of best-beloved operas of all time. The first of Puccini’s verismo operas, works that depicted ordinary people leading everyday lives – as opposed to the gods and goddesses, kings and queens more usually seen on the operatic stage – it premiered (to initially bad reviews) in 1896 and hasn’t stopped since. The tale of young “bohemian” artists and the girls they love has inspired a number of spin-offs, Baz Luhrmann’s long-running Broadway version and the musical “Rent” among them. Locally, it was the first official production of the fledgling San Francisco Opera in 1923 and it remains the company’s most frequently performed work.

This production is notable for a couple of reasons; it is the first local podium stint for music director-designate Nicola Luisotti since he was named to replace Donald Runnicles for one. For another, it marks the return of famed soprano Angela Gheorghiu after her stunning San Francisco debut in “La Rondine” last season. Gheorghiu will share the role of Mimi with Latvian soprano Maija Kovalevska. Polish tenor Piotr Beczala is Rodolfo, the poet who loves Mimi and will be replaced in the second cast by Joseph Calleja.

Directed by Harry Silverstein, this “Boheme” also has a few odd quirks. The second scene of Act I, set on Christmas Eve in the Latin Quarter, traditionally takes place outside the Café Momus, with all the street action going on as the principals eat, drink, quarrel and make up at tables outside. In this version, they have moved inside the café (perhaps in deference to the chilly weather), necessitating the street to follow them. The toy vendor, Parpignol, marches right through the café, followed by his entourage of unruly children and scolding mamans. They sing their part and march right out again. It’s pretty weird. Other oddities surface in the next act, which takes place later that winter outside the city gates. As the curtain rises, a crew of street sweepers is waiting for the gates to be opened, clamoring to get in. Strangely, their voices come from offstage although they are standing right in front of us. When Mimi enters, wracked with coughing (she has tuberculosis, poor thing) and wearing a thin shawl over her dress, her lover comes out of an adjacent tavern and tells his friend how worried he is about her health. Strangely, Rodolfo is warmly dressed in a sheepskin-lined jacket and never during the ensuing duet does he move to put it around the shivering Mimi. One more: as Mimi sings that she left at daybreak to find him, the sky remains resolutely dark. Day never broke.

Maybe only a hardened critic would be disturbed by such anomalies. Maybe only a hardened critic should be. The music is wonderful. Gheorghiu has us from her opening “Mi chaimano Mimi” and never lets us go until her dying breath, three acts later. Beczala, after a shaky start in his upper register, makes a fine Rodolfo and they are undeniably a beautiful couple, believably in love. The second leads, Marcello, the painter (Merola alumnus Quinn Kelsey, who will share the role with Brian Mulligan) and Norah Amsellem (sharing with Tamara Wapinsky) as his flirtatious but ultimately good-hearted Musetta also sang beautifully. Amsellam was even more effective in her prayer for Mimi’s recovery near the end than her famous tour de force waltz near the beginning. Marcello’s duet with Rodolfo, recalling their glory days of love, was another high point. The other two “bohemians,” Schaunard the musician (Brian Leerhuber) and Colline, the philosopher who sells his beloved overcoat to buy Mimi medicine (Oren Gradus) also were good. The clowning of the four friends in the first and final acts was, as always, a nice comic relief. Mimi may die in the end but “La Boheme” probably will continue in the operatic repertoire forever. And that’s as it should be.