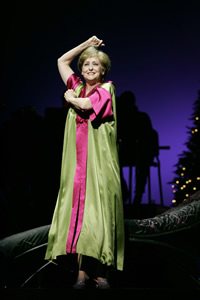 Libretto by Gene Scheer (after a play by Terrence McNally)

With its lugubrious title, it’s a blessing “Three Decembers” is not, after all, about AIDS. Instead, this inoffensive (if somewhat far-fetched) chamber opera explores the delusion that keeps a family together and, more interestingly, apart.

A cast of three singers—notably mezzo-soprano Frederica von Stade, for whom the piece was written—succeed in bringing an uneven score by Jake Heggie (“Dead Man Walking”) and often hackneyed lyrics by Gene Scheer (who based his libretto on the short play, “Some Christmas Letters (and a Couple of Phone Calls),” by Terrence McNally) to a satisfactory conclusion. But the production overall (with appropriately showy costumes by Cesar Galindo and minimal though effective sets by director/designer Leonard Foglia) never quite matches their endeavors. What might have been a stirring exploration of what binds (and constricts) a mother and her two children settles uneasily somewhere between an earnest song cycle and a flashy Broadway musical.

The work—which premiered in Houston earlier this year entitled “Last Acts”—centers on a theater diva (von Stade) and the prickly rapport she shares with a gay son (baritone Keith Phares, in his San Francisco Opera debut) and a love-starved daughter (soprano Kristin Clayton), who pine for the father who died when his children were still young. That their inaccessible, career-bound actress mother harbors a longtime secret about her husband, coupled with her aloof relationship with their kids, would seem the perfect subject for dramatic exploration. But the story never settles on that theme for long, sidetracking on the son’s grief for his AIDS-afflicted lover and the daughter’s quest for intimacy in a loveless marriage to a rich man. Along the way, there are dollops of guilt and recrimination, punctuated by attempts at reconciliation, but nothing sticks until Mom spills the long-simmering beans about Dear Dead Dad in an implausible climax and contrived denouement.

As stage-stricken Madeline, von Stade imparts a dignified grace to a role written for her but perhaps better suited to the arch antics of Glenn Close. Heggie takes care not to challenge von Stade’s instrument unduly (the 63-year-old mezzo has announced her intention to retire in 2010), and so her singing relies on her trademark emotional expressivity, evident in a lullaby she sings her son, but less so in a boilerplate honky-tonk she belts in a red-sequin getup framed by flashing lights. The part telegraphs “swan song,” but audiences can at least hope that von Stade, who has thrilled houses worldwide with her bel canto repertoire and trouser roles, will go on exploring the sultry nuances of her mature voice.

Phares brings a masculine bravado to Charlie, the gay son, and Clayton makes the daughter more than cardboard with believable passion and rage. The two are best in their duet on the Golden Gate Bridge, when they recall the spectral figure of their father, reading in his chair. The poignancy of their yearning voices is equaled by the simple poetry of the lyrics—a confluence rare in this production.

In fact, the show’s greatest weakness is Scheer’s libretto, inducing cringes with such clunkers like “Moonbeams are heartstrings” and “Isn’t life simply grand?” At the same time, Heggie’s music veers uncomfortably between ethereally soft interludes for strings and piano and brassy outbursts of jazz and blues via the Great White Way. The resulting unwieldy mix has a herky-jerky feel—rendered even more disconcerting by subtle-yet-noticeable amplification of musicians and singers alike—and it’s a wonder that the cast manages to pull off moments of human truth and tenderness. It is fervently to be hoped that von Stade will end her career with a work more suited to her gifts as a singer and actress. She’s no Madeline, and we should all be glad for it.