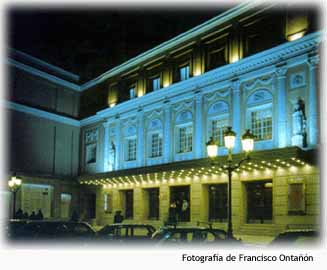 Zarzuela is the unique Spanish form of musical theater/operetta, made up of text both spoken and sung, with solos, duets, ensemble pieces, choruses, and dances as well. It is characterized by a focus on the holidays and festivals, customs, and folklore of Spain. The music often has folkloric roots as well, but was also influenced by Italian and French opera and operetta.

The original Teatro de la Zarzuela in Madrid opened in 1856 and was destroyed by fire in 1909. The current theater building opened in 1913. Its auditorium has an unraked orchestra section with four tiers of seating rising in the traditional horseshoe configuration. Based on a Saturday night visit, the crowd is somewhat on the older side (not unlike opera audiences everywhere), prosperous-looking, attentive, and enthusiastic. Fans are used by many during the performance, to cool, as well as to move the very still air in the theater.

Francisco Asenjo Barbieri was perhaps the single most important figure in nineteenth century Spanish music. Barbieri was a champion of zarzuela and one of the founders of the theater. HisPan y Toros (Bread and Bulls) premiered there in 1864. It takes place at the end of the 18th century and is rooted in the complexities of Spanish history and politics and the real personalities of the time. Charles IV was king, but a weak ruler subservient to his wife, powerful Queen Marie Louise. The Queen’s lover, Count Manuel Godoy, was effectively in charge. In the Machiavellian maneuverings for power, waged not only within the Spanish court, but also involving the internationally linked monarchies of Europe, the ordinary people often seemed to end up pawns caught in the middle. The title of the operetta refers to the aristocratic attitude–keep the people fed (pan – bread) and amused (toros – bulls) and they will be compliant.

Godoy was believed to have sold out to the French, and, indeed, Napoleons’s army entered Spain. The Spanish people rebelled in 1808 but were defeated by the French. And in all this time the great painter Goya was observing ad recording the history in his art. It is against this general background that Pan y Toros is set, with a complicated story of intrigue, plotting, and assumed identities, involving Do�a Pepita (subject of a Goya painting), a duchess (another Goya favorite), a princess, a general, a priest, and various others. The political viewpoint comes through–this is surely a people’s operetta, playing on underlying themes of oppression, freedom, and nationalism.

While there is some spoken dialogue, music and singing dominate. Characters peripheral to the plot are interspersed (a family of beggars, a trio of matadors) to add notes of social or political comment and comic relief. The music, with its base in folkloric tunes (seguidillas, jotas, calaseras) is melodic and accessible. There was a wide range of quality in the singing voices, but no one character dominates sufficiently to let a bit of off singing spoil the overall effect. The ensemble singing and the chorus are first-rate, with strong accompaniment by the orchestra. Dances were best when confined to traditional steps; attempts at more interpretive ballet were unsuccessful, verging on camp, as most opera ballets everywhere seem to be.

A unit set is utilized throughout, helped by skillful lighting, but still suggesting a tight production budget. Costuming is colorful, though again, budget restraints appear–the principal women appear in the same gowns through three acts. In some scenes, the female dancers are strangely dressed in see-through garments with, one presumes, body stockings underneath creating an illusion of nudity. Surely without historical accuracy, it can be speculated that this is a strained attempt either for "art" or to titillate. The overall style of performance seems just a bit stiff, with a less than naturalistic delivery of spoken lines and moments of genuine hamminess.

But these are minor quibbles, perhaps unfairly brought to a spirited performance that is in many ways conditioned by long convention and local custom. For the visitor, it provides another path of entry to genuinely Spanish cultural expression. For the mostly local audience, the standing ovation was ample evidence of pleasure and support for this important cultural institution.