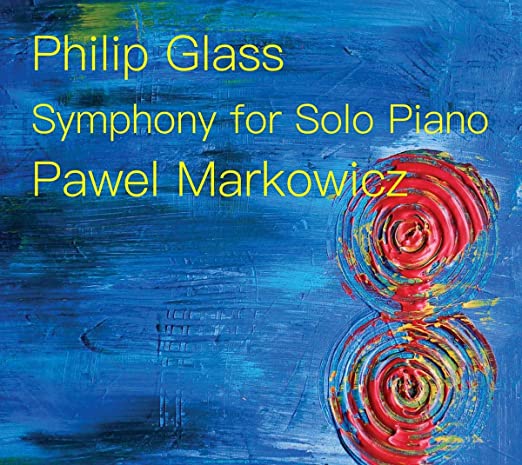 Musical transcriptions have been around for millenia, even before the medieval, baroque, classical, romantic, modernist and postmodernist periods of the all hallowed western tradition which means both its European and its American incarnations.

But do we need these arrangements because a composer wants his or her symphony arranged for smaller forces so it can travel or, because a specific performer loves a piece and wants to make it her or his own by transcribing and performing it?

Such is the case with the twenty-six year old Polish-Austrian pianist Pawel Markowicz who fell in love with Philip Glass’ Symphony No. 8 ( 2005 ) when he first heard it played by American conductor Dennis Russell Davies’ former house orchestra The Bruckner Orchester Linz in its Innsbruck, Austria premiere in 2006 led by Argentine Dante Anzolini.

I had the great good fortune to hear and write about the Davies-led 2005 November world premiere of the Glass 8th at the Opera House of The Brooklyn Academy of Music for www.latimes.com and www.ebar.com, and see its rehearsal there, and www.youtube.com has a clip of that run through – GLASS ( directed by Scott Hicks ) Symphony # 8.

But then Davies, who commissioned it knows his way around Glass’ music like few others, and he and Anzolini who led Glass’ second opera ” Satyagraha ” ( 1980 ) live at www.metopera.org – and his third “Akhnaten ” (1983 ) in a live staged with projections production in Torino, Italy. Both conductors are a hard act to follow., and then there’s Glass’ symphony itself.

But Markowicz’s version is so good it sounds like it was written just for his Steinway 274 grand. Of course it wasn’t, but you’d never know it if you just heard this

Glass’ original full orchestra version of his three movement piece was written on twenty-four staves, at its full bore maximum, for an orchestra of say 70 musicians with the proverbial battery of percussion. Markowicz has boiled down these staves to just two — one for the pianist’s right hand — treble — and one for the pianist’s left hand — bass — which is obviously a very remarkable feat. But let’s not forget that Franz Lizst performed a similar feat when he scored the nine Beethoven symphonies ( 1837; 1863-4 ) for solo piano for his own use. And let’s also not forget that keyboard players tend to think big because a piano is an instrument with an almost full orchestral range, and whether pianists like to admit it or not it’s primarily a percussion instrument. Markowicz treats it that way for most of his 36 minute 56 second take on this piece which is now seen as a landmark in Glass’ symphonic output. But his playing also gets under its notes so you can hear its foreground / background construction by listening to his arrangement as well as Davies and the BOL’s recorded performance on www.orangemountainmusic.com.

This can’t have been an easy task because Glass’ 8th is complex on myriad levels. But Markowicz seems to breathe with it, and he lets its frequent metric shifts — 8/8 ( 3 + 3 + 2 ); 7/8 ( 3 + 2 + 2 ); 5/8 ( 2 + 3 ); and 9/8 ( 2 + 2 + 2 + 2 + 1 ) in the opening pages of Movement I ( met. 144 ) alone, sound entirely natural, and these changes give the symphony its surprising yet completely logical energy. Its contrapuntal lines also sound even more compressed, urgent, and inevitable in Markowicz’s hands. Glass’ musical argument comes off as equally convincing or even more convincing than that in his full orchestra score. And its single minded force suggests, without ever quoting the music of his classic 1969-1974 period when he invented an entirely new language for himself. His symphonic language here is also completely his own though many have tried to tether his language in Movement II ( met. 96 — in 4/4 ) to Shostakovich’s, which is more than a stretch.

Markowicz’s transcription of Mvt II ( met. 96 , in 4/4 ) works perfectly well on its own though a lot of the beauty and character of its melodies, colors, and densities in Glass’ pinpoint orchestration seem to be missing. Any arranger faces tough questions when she or he arranges a piece. Markowicz’s here may be faithful to the score per se but it also tends to simplify this subtle and remarkably elusive movement. The “meaning ” of the succeeding Movement III ( met. 96 in 4/4 ) is explicit yet hidden. Markowicz gets its overwhelming sense of desolation down, and Glass, for his part, has said that he was on the very edge of what he could hear in his head when he wrote it. It also suggests the profound sense of leave-taking in his Piano Etude No. 20 ( 2012 ) with its ppp ( as soft as possible ) marking at the very end. Markowicz’s playing projects a similar feeling here.The concluding bass notes in the lowest register of his Steinway speak volumes. The audience at BAM held its breath when I heard Davies and the BOL play it live, and after a few seconds they voted with a standing ovation. And I’m sure Markowicz gets the same response when he plays his frequently stunning arrangement of Glass’ 8th before an audience which is listening as hard as he is.

The late great Italian poet Eugenio Montale once said this about his work.

“Poetry is that which contrives to elude the poet.”  And isn’t that what everything, and not just music, is about?