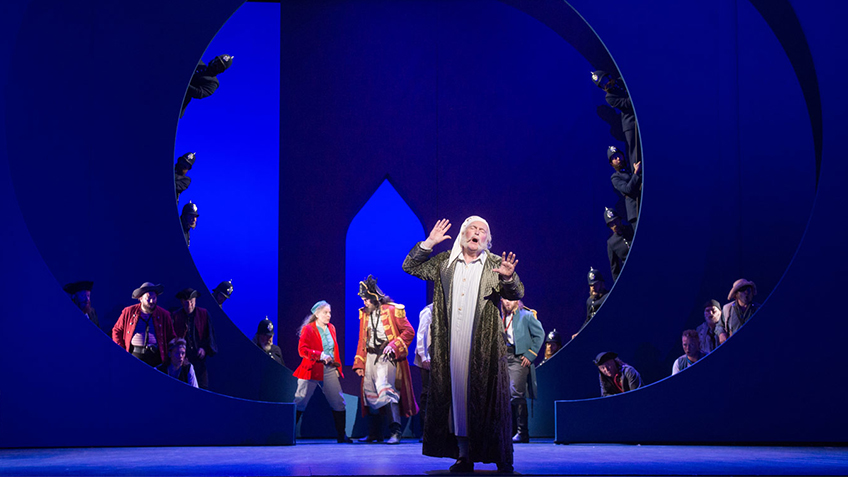 Returning after two years is Mike Leigh’s inimitable production of Gilbert & Sullivan’s The Pirates of Penzance, which is notably stronger in direction and performance compared to its first outing. It didn’t make the cut for some critics who complained about its cavernous and abstract staging for the London Coliseum’s large theatre – its capacity reaches 2,350. That said, this is the same production that took more than £600,000 at the UK box office, with roughly 40,000 viewers, when it was screened in cinemas for a one-night showing. Go figure.

After some disappointments, what are we to expect from Mike Leigh this time round? Firstly, Sarah Tipple directs this revival of Leigh’s work, yet the same designer Alison Chitty is here to stay. The simple, fluorescent, blind-your-eyes background shades aren’t leaving the ENO, just, yet, however, this doesn’t seem a problem when the performers have great voices and provide something unique and wacky to their characterisation. After all, this is the comedy writings of W. S Gilbert.

Moreover, it seemed as if the stage direction, and interactions between the pirates, police, and daughters of the Major-General, were much more tight-knit. So with all of these positives could it be that Leigh stood back and permitted Tipple to implore her artistry? Who knows, yet whatever enchantments Tipple has brought in, this resulted in an opening night of A-class stuff.

This smooth transition arises from a sturdy chorus, a boisterous bunch of slick soloists, a rousing and cheerful orchestra, and an inspiring conductor. Gareth Jones gave a warm and pleasant performance of the opening number, yet his baton pushed out energy and dynamism, through the ENO orchestra, where needed, to stomping songs like With Cat-Like Tread.

The singing is top notch too. Soraya Mafi as cheeky Mable is impressive with her fabulous top notes and shimmering scales she loves to indulge her audience with. Pirate-wannabe-pilot is neatly sung by David Webb who sounded quiet at some points, but nonetheless an excellent portrayal as Frederic, and Ashley Riches’s own interpretation of the zany Pirates King was a tremendous comedy; expressive facial expressions and silly stage maneuvers. His bass is in great shape too.

Lucy Schaufer is comical and animated as the cougar Ruth, chasing the clueless Frederic around the set. Her vocal strength was duly noted especially with what sounded like an American folk dialect – it was her best impression of pirate’s speech. Nevertheless, it went down a treat for the audience. Wagnerian bass John Tomlinson is triumphant as the pensive and hopeless Sergeant of Police and gave a steady and bold presentation with the marvelous chorus of A Policeman’s lot is not a Happy lot. And Andrew Shore is just as unstoppable as his last performance in 2015. Full of frolics and excitement, he captures a Major-General we learn to love.