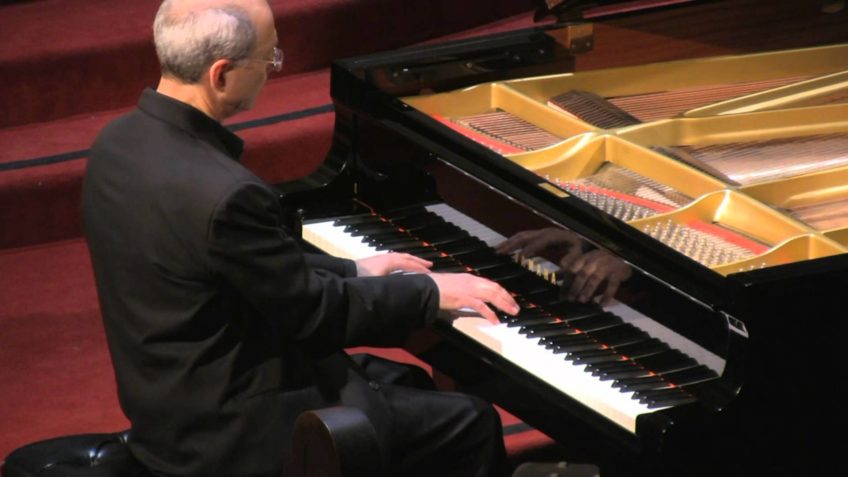 Solo piano recitals aren’t that frequent even in a fairly sophisticated town like San Francisco. Sure, we have them at the San Francisco Conservatory of Music, and high profile international pianists presented by SF Performances. But the only real venue for pianists both well-known and up-and -coming is at Old First Church on Van Ness at Sacramento, which has provided a home for local lights like Sarah Cahill and Robert Schwartz. Cahill has carved out a career of playing late American modernists like Leo Onstein, and “minimalist/post-minimalists” like Rzewski, Harrsion, and John Adams. while Schwartz has tended to focus on the standard classical repertoire. His April Fools’ Day concert wasn’t foolin’. How could it with keyboard icons like Scarlatti, Ravel, Bach, and Scriabin on the bill?

These are largely virtuoso works, and Schwartz, who plays from memory, has a virtuoso technique which applied to some, but not all. That technique served him best in the most obviously “classical ” pieces on his program — three of the 555 sonatas — K. 141 in d; K. 8 in g; K. 96 in D — by Domenico Scarlatti ( 1685-1757 ), and the Partita # 3 in a, BWV 827 by Bach ( 1685-1750 ), Nineteenth-century romantic pianists took the Scarlatti for “miniatures” but they’re every bit as solid and evocative as any Schubert impromptu, and the Neapolitan, who served as Spanish Queen Maria Barbara’s music master drew Iberian feeling — the “cante jondo ” or deep song, and rhythms into his own style, and Schwartz’s clear as crystal but engaged readings of the Scarlatti, in an edition by the Parisian publisher Heugel, were logical, but full of controlled fire. His Bach was equally clear, present, and utterly relaxed, with the German master’s contrapuntal games moving effortlessly from left hand to right. His playing of the 1903 Sonata # 4 in F # by Scriabin ( 1872-1915 ) was show biz on a roll, with a melody posing, like much of Scriabin — and we can pencil in Messiaen — for something both vigorous, exotic, and “deep”.

It’s often been said that you’re either ” German “, or “French “, and Schwartz’s curious and unidiomatic playing of the five piece 1905 Miroirs by Ravel ( 1875-1937 ) placed him squarely on the Rhine side, which isn’t a criticism per se, but a description of where his inclinations lie. It sounded much more thought about than felt, which may have something to do with Old First’s cement block acoustics, but I doubt it. The Iberian connection in “Alborada del Gracioso “, which is as ” primitive ” as Stravinsky’s 1913 “Sacre ” was almost completely fudged — too much pedaling? which isn’t in the score — and the four other pieces emerged somewhat impressive, but alas still born. Ravel is a largely underrated composer despite his obvious public success. His artificial quality was in some ways a reaction to the heavy breathing of the late/post romantic composers.

He breathes another world, and if you’re in sync, that’s it.