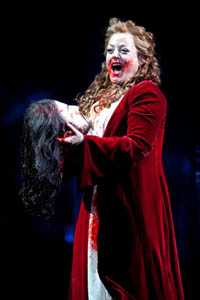 Music and libretto by Richard Strauss
(in German, based on the Biblical story and Oscar Wilde’s play Salome)
Conducted by Philippe Auguin
Directed by Francesca Zambello
Washington National Opera
Selected dates Oct. 7 to 23, 2010

A one-act, running one hour and 40 minutes with no intermission, “Salome” features a virgin of such beauty and sexual allure that few men can take their eyes off her, including her stepfather, King Herod (British tenor Richard Berkeley-Steele). The opera opens on a moonlit terrace of Herod’s palace in Israel where the young captain of the guards, Narraboth (sung in an outstanding performance by American tenor Sean Panikkar), spies on Salome and sings of his love for her.

Inside a cistern that is accessed from the terrace, Jokanaan—the English-speaking world knows him as John the Baptist—proclaims the Messiah promised to the Jews has come. Attracted by Jokanaan’s voice (sung by Australian bass-baritone Daniel Sumegi), Salome rushes onto the terrace and uses Narraboth’s attraction for her to have Jokanaan brought out of his underground prison. Jokanaan is disgusted by Salome’s amorous advances and puts her in the same category as Salome’s mother Herodias, whom he calls a whore of Babylon.

Meanwhile, Narraboth, who feels not only rejected but also humiliated by Salome’s perverse behavior, stabs and kills himself while she pays no attention to the suicide and continues to pursue Jokanaan. Without prompting from the guards, Jokanaan returns to his subterranean prison, leaving an angry Salome, who then cuddles lasciviously in this production with the dead Narraboth.

What follows this horrifying introduction to Salome is the striptease dance of the seven veils for which Herod has promised his wife’s daughter anything she wants including half his kingdom, meaning she would supersede her mother as queen. However, Salome wants only one thing and that is the head of Jokanaan brought to her on a silver platter. While Herod is superstitiously terrified of killing the prophet and won’t hand over Jokanaan to the group of Jews Herodias suggests should deal with the raging holy man, Herodias (sung by German mezzo-soprano Doris Soffel) applauds her daughter’s demand and sees it as a demonstration of filial fealty. Immediately, Salome tells the court that what she wants has nothing to do with her mother.

Herod gives in and Jokanaan’s head is brought to Salome. She embraces the head and takes the kisses Jokanaan refused her in a scene that covers her hands and face with blood. Revolted, Herod orders his stepdaughter’s death. In this production, instead of being crushed by the shields of Herod’s guards, a single executioner strangles Salome.

Musically what is challenging about Strauss’ dark opera that unfolds a story of perverse obsession is keeping the singers voices from being covered by the orchestra. For the most part, Philippe Auguin, the newly appointed WNO music director and conductor for this production of “Salome,” did an admirable job of containing the impressionistic music, which layers in lyric dances and dissonant bursts.

Without question, Deborah Voigt is an impressive and practiced force as Salome. In 2006, she played the same role under Francesca Zambello’s direction in a Lyric Opera of Chicago production of “Salome.” It is a demanding assignment of singing, dancing, and acting requiring the performer to be onstage most of the 100 minutes. Her dance of the seven veils is colorfully engaging but not as sensational as could be, since the stripping away of the veils reveals nothing more than a flesh-tone body stocking. Nevertheless, this reviewer was thankful to be seated close enough to the stage to comfortably see all the action and the surtitles while not having any need to use opera glasses, which would dispel the illusion that the well-preserved Voigt, born in 1960, is not a teenager. The reality is few could perform as successfully as this soprano does.

Perhaps somewhat surprising is how benignly Richard Berkeley-Steele acted the part of Herod. When this King Herod offers Salome a bite of fruit exclaiming that he wants to put his mouth where hers had been, it seems harmlessly flirtatious and almost charming. Compared to the justly venomous interpretation Doris Soffel gave to her role as Herodias and the over-the-top sexual perversion Voigt layered on as Salome, Berkeley-Steele seemed more like a pawn in Salome’s game and hardly the ruthless monarch. The killings he orders all seemed to be Salome’s fault, including her own brutal death.

Likewise Daniel Sumegi’s Jokanaan seems overshadowed by Voigt’s Salome. Zambello presents Jokanaan in a web of ropes, but once he leaves the stage completely free of the heavy ropes—is he enraged? No, he seems dazed by Salome’s incredible aggressive advances—again, once Jokanaan leaves the stage, Salome gathered up the ropes as if these lengths of twisted hemp are Jokanaan’s very sinews.

Zambello either had some radical but effective guidance for how she wanted Herod and Jokanaan to play against Salome or the performers themselves were tamed by the energy that Voigt exerted in creating this monstrous young woman. No matter how this situation came about, the major characters of this opera were effective in creating a compelling production. The only flaw for this “Salome” was the scrim of plastic flaps (think entrance to a New York bodega in August) that separated the terrace from the interior of the palace.