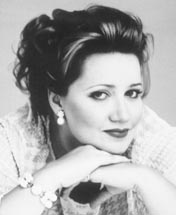 Samson et Dalila, Saint-Sa�ns’ only opera to remain in the active repertory, doesn’t get a lot of respect. When it was revived at the Metropolitan Opera a few years back, New York Times critic Bernard Holland called it a "creaking period piece, propped up by a handful of irresistible arias and some famously lurid dance music." He suggested that it "needs all the help it can get."

In San Francisco this season, the help is on the boards and her name is Olga Borodina. Samson et Dalila is revived, more often than not, to showcase a mezzo-soprano, since the mezzo gets all the great arias. Borodina is a favorite at SFO where she performed her first Carmen in 1996 and a notably fine Lyubasha in The Tsar’s Bride last season. Dalila is one of her signature roles.

Here’s an opera where few will need to bone up on the synopsis; the broad sweep of the story is pretty much as most people know it from the Bible, even if the details have been changed. Samson rallies the Hebrews against the ruling Philistines and kills Abimelech, the governor of Gaza. He becomes enraptured of Delila, whose deceit leads to his capture. Blinded and in chains, Samson sustains faith in face of the mockery of a pagan crowd. With miraculously restored strength, he brings down the temple upon himself and his Philistine persecutors.

It is a strange anomaly that the libretto (by Ferdinand Lemaire) doesn’t include the crucial turning point of the story–Samson’s revelation to Delila that his strength is in his hair and her subsequent triumph in relieving him of both. The San Francisco production attempts to compensate by miming those events at the end of the second act, but it is what immediately preceded that made for gripping musical drama. Samson’s leadership has led to victories for the Hebrews and humiliation for the Philistines. The high priest (Timothy Noble) urges Delila to learn from Samson the secret of his strength.

Delila, her pride damaged by being rebuffed by Samson after their earlier liaison, and a sexual opportunist in any event, determinedly uses her every wile to lure Samson ("Love come to my aid…Fill his heart with your poison"). Samson (Sergei Larin) is at the same time both irresistibly tempted and wretchedly conflicted ("Lord, have pity on my weakness!"). Samson and his conscience enter pitched battle with the sensuous allure of Delila. "A god much greater than yours speaks through me," she beguiles, "My god, the god of love."

Even in full knowledge of the outcome of this one-on-one war of wills, there was palpable tension electrifying the stage at SFO. Borodina, her voice ranging from a buttery and mellow lower register to full out (but never harsh) higher tones, is an actor of notable skill; she negotiates changes in mood from pure seductiveness to wily scheming to feigned rejection, never falling into the potentially fatal trap of hamming up material already somewhat overripe. Larin matched her both in intensity and in dramatic singing, offering his best performance ever at this house.

Timothy Noble brought conviction to the role of the high priest and Rene Pape was genuinely moving as the old Hebrew, offering a rich, beautifully projected basso sound. Only Scott Wilde, as Abimelech, was (way) under par; fortunately he gets killed off early in the proceedings. The best music in the first act falls to the chorus and the SFO Chorus gave its usual world class performance.

The production, originally unveiled in San Francisco in 1980 (with Domingo and Verrett), holds up remarkably. The look is a combination of picture postcard and pure deMille: first act exterior of the temple on the diagonal, palm trees silhouetted against an orange sky; second act, Delila’s house–a posh tent; and the ultimate third act collapse of the temple. Here the traditional serves well where a modern reinterpretation might well tear the fragile fabric of this drama.

(16087)
$3.88 (as of January 25, 2021 - More infoProduct prices and availability are accurate as of the date/time indicated and are subject to change. Any price and availability information displayed on [relevant Amazon Site(s), as applicable] at the time of purchase will apply to the purchase of this product.)

(22386)
$17.70 (as of January 25, 2021 - More infoProduct prices and availability are accurate as of the date/time indicated and are subject to change. Any price and availability information displayed on [relevant Amazon Site(s), as applicable] at the time of purchase will apply to the purchase of this product.)

(20479)
$5.96 (as of January 25, 2021 - More infoProduct prices and availability are accurate as of the date/time indicated and are subject to change. Any price and availability information displayed on [relevant Amazon Site(s), as applicable] at the time of purchase will apply to the purchase of this product.)
related posts