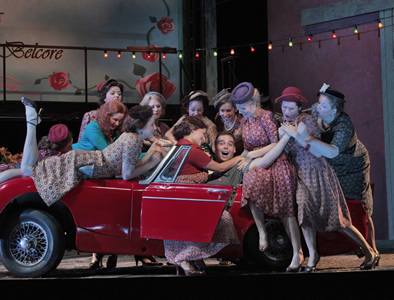 The Elixir of Love

Summer blahs got you down? Have I got a cure for you! Not only will it fix just about anything that ails you but the magical “Elixir” now going on in repertory at the Santa Fe Opera might just make you fall in love all over again – with Donizetti, that is. The composer’s 1832 opera buffa, with libretto by Felice Romani, pairs a country bumpkin with the capricious landowner who laughingly spurns him. Nemorino, the lover (a clarion-voiced Dmitri Pittas), languishes until a snake-oil salesman blows into town and sells him a nostrum that ends all his woes.

Not only does Santa Fe have a dynamic new tenor in former apprentice Pittas, who recently sang the “Magic Flute” lead at the Met, but Jennifer Black (also a former Santa Fe apprentice) puts the bel in bel canto. Her Adina is a pert, pouty, flirty delight and her voice is to die for (as Nemerino frequently threatens to do if she will not agree to marry him). Rounding out the trio of principals is veteran Metropolitan Opera bass-baritone Thomas Hammons, a last-minute substitute for John Del Carlo, as the charlatan Dr. Dulcimara.

Dulcimara has arrived on various opera stages around the world in a hot air balloon (the preferred mode of transportation), a wagon hung with posters touting his miraculous cures and, most recently in San Francisco, in a spiffy early motorcar. Here, however, he slinks onstage in disguise as an old lady, with the local caribinieri hot on his heels. A quick slip behind a billboard and he emerges – shades of Marlon Brando’s “Godfather” – as an oily entrepreneur in pinstripes and spats. Hammons is marvelous, both vocally and in the physical comedy so crucial to the role. Rachel Schultz is adorable as Adina’s friend Gianetta but Patrick Carfizzi overacted and under-sang Sgt. Belcore, Nemerino’s bellicose and narcissistic rival for Adina’s hand.

Director Stephen Lawless’ early 1940s production moves along mostly on wheels. Nemerino, cast here as an auto mechanic, spends a lot of time working on a red convertible in which he eventually will ride off into the sunset with his lady love. Belcore and his regiment jolt into town on a broken-down jeep and even the marrying priest rolls up on a motorcycle. But none of them move as swiftly as this delightful production. It fires on almost all cylinders.