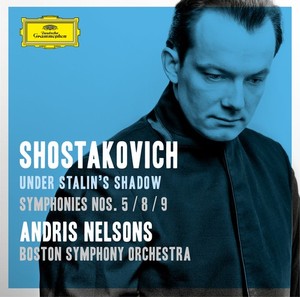 At any given time Shostakovich was out of official favor with the Stalinist regime and the composer lived under threats that he might be banished to the gulag. In the liner notes Nelsons comments that “The greatness of Shostakovich’s music is beyond politics.”

Indeed, Russians knew that Shostakovich was composing Russian music and telling underground stories, however musically veiled, that some got past the Soviet censors. He was temporary in good graces with the success in 1937 of his ’ Symphony no. 5, which he admittedly composed, somewhat cryptically, as more “simplistic” than his works that were being officially condemned, however subjectively, as ‘anti-Soviet.’

Shostakovich began his career writing film scores for the Soviet cinema, so he could compose in very “accessable”music. The 5th Symphony has one of his most dramatically effective orchestral hooks in his repertoire. Nelsons makes this such a lustrously translucent narrative, with thrilling tempos that never lose musical depth, even in the work’s most sonic dimensions.

Nelsons’ conducts an equally thrilling performance of Symphony no. 9, bringing the composer’s entire dramatic mystique to its full dimensions. Initially conceived as an orchestral work in honor of the Soviet defeat of the Nazis, it was instead reconceived as a symphonic narrative steeped in roiling Shostakovithian orchestral subtext. It premiered in the pivotal year of 1945, at the end of WWII, as the USSR reasserted domination in Eastern Europe bloc countries; the work was alternately officially praised and condemned in its time. It was even nominated for a Soviet music award, but otherwise officially panned for its failure “to reflect the spirit of the Soviet people.” In fact it does exactly that and more.

Disc 2 opens with the a fascinating, and musically contrasting suite from the composer’s original incidental music created a scandalous production of Hamlet in 1932 that, turned Shakespeare into avant garde burlesque. It was summarily denounced by the Soviets as decadent art. More than a curiosity, Shostakovich was able to exploit its theatrical cover by composing ironic can-cans, gallops, fanfares and orchestral buffoonery bursting forth. The various symphonic themes include a scabrous funeral march and ballroom bubbly ‘Flourish and Dance Music’ and ‘Ophelia’s Song’ as a motif more like a Danza that of a tragic diva. Shostakovich would return the Hamlet twice more in his musical career, connecting artistically to a ‘to be or not to be’ dilemma, as musicologist Harlow Robinson notes, indeed was the composer’s musical inspiration as he contemplated his own fate.

The Hamlet Suite is a jaunty interlude before the intensity of almost hour-long Symphony No 8 composed in 1943, in its time unappreciated for its profound implications, but since regarded as one of the composer’s most musically significant works. BSO articulates the shifting seismic power, as well as its poetic fury and its searing compositional intimacy throughout the nearly hour long piece.