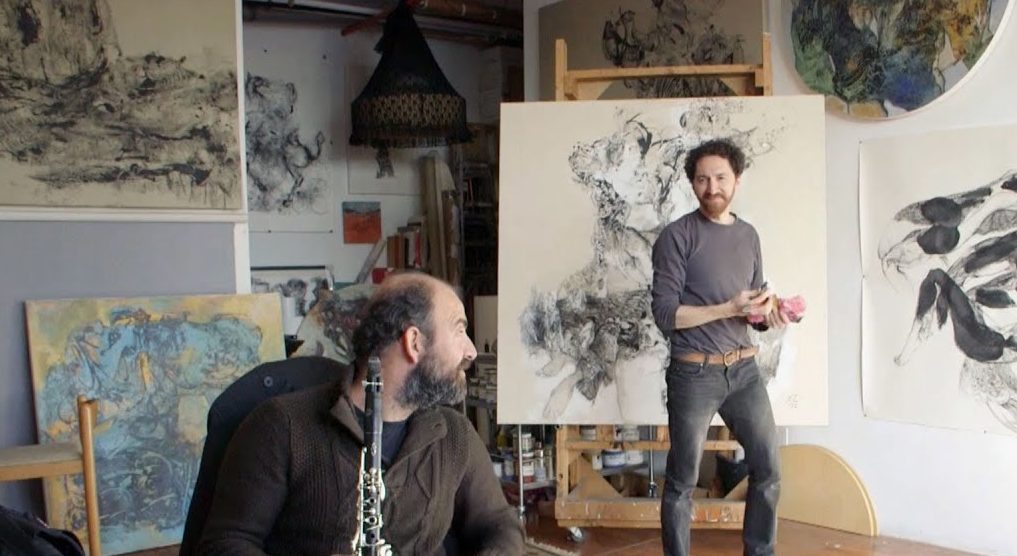 I'm a widely published poet, dramatist-filmmaker-director-actor, and writer on the arts. My poems have appeared in Mirage, Stanford's Mantis, and many other places. I have written 3 fine art books of my poems with www.garybukovnik.com -- "Before I Forget" (1990) -- www.nypl.org Bryant Park, Rm 308 -- the single copy "Once" (1996); and "All Kinds of Weather" (2016) www.norfolkpress.com. My live theatre work includes the three actor "touch and go " which Zack's Common Cultural Practice premiered in a San Francisco show called NEW WORD ORDER. My theatre piece "Sight Unseen" premiered in 2011 on 9/11 week-end at NY's Bowery Poetry Club with painter Elizabeth Murray's daughter Sophie Holman performing the role of "Speaker" before an illustrious crowd which included the late painter Chuck Close, and Ada and www.alexkatz.com and their family. I shot a film version of "SU" wth Hermann Eppert at www.studiocherie.net, Berlin (2013) with www.birgitstauber.de, and have played its "Speaker" many times, especially in a 2014 live performance in a 2-part bill with a set of my poems at The Berkeley Arts Festival, Ric Louchard pianist. I also wrote, produced, cast, acted in, and directed my theatre pieces "Speaking Terms" in 2016 at BAF, with Misha Khalikulov, cellist, and a cast of 4 in A RUSSIAN NOVEL [ Anna and Vronsky ] pianist Jim Jowdy, which I co-directed with the Lebanese actor Nassim Aboufaraj, who played Vronsky. . The widow of the celebrated film composer Alex North (1910-1991) -- Anna North ( 1940-2005 ) -- hired me to write for www.alexnorthmusic.com. I've also written about this consummate artist for www.ebar.com; www.classical-music-review.org; www.varesesarabande.com; and wrote, directed, and realized the DVD ALEX NORTH VIVA ZAPATA! 2010 with videographers Bauer and Hibdon, which www.alejandroescuer.com and www.onixensamble.com played live to in Puebla Mexico, 2010. I co-hosted " Who Is Alex North? " with Tony Gualtieri, with whom I did 8 other live shows on KUSF-FM, including 2 with guest composers Joan Jeanrenaud and Gerhard Samuel. I've covered books,music, art, architecture, and film for www.sfchronicle.com; www.latimes.com; www.advocate.com; Keyboard; www.sequenza21.com; Antiques and Fine Art;The San Francisco Review of Books; and many other places. Gerhard's setting of my poem "3 " as "night and trees " can be heard on www.sfcco.org I have also authored fine art catalogs for Contemporary Romanticism, UC Hayward (1986), and painter Matt Phillip's 2012 www.meyerovich.com show. I'm currently working at casting, acting in, and directing an online production of my "for Mahmoud Darwish" for which I hope to engage a superb Syrian musician of international repute as well as some of my Bay Area Arab friends. I'm currently writing "Tolstoi and Stalin Meet for Tea " for podcast and/or radio, and will be putting ALEX NORTH VIVA ZAPATA! 2010 online. AND? a fourth book of my poems called "and others".

What does being serious mean? Is it a long face which harbors the best of intentions? Or is it virtue signalling which shows you’re on the side of truth and justice without ever lifting a finger? Or does it mean actually doing something like trying to help children who’ve been forced to live in one of the largest refugee camps in the world — say Za’atari, Jordan — which is scant kilometers from the Syrian border town of Dar’aa where Lawrence of Arabia was tortured in 1918, and where the Syrian uprising / war began in 2011? New York-based Syrian clarinetist-composer Kinan Azmeh and his Armenian-Syrian painter friend Kevork Mourad actually visited this camp when they were conceiving their sixty minute audio-visual performance project ” Home Within”  in 2012, and it asks all of the aforesaid questions just by being itself. Because the real world is never divorced from our fervent fantasies of what it could, or should be.

And so we’re stuck with art which is supposed to make sense of our senseless human condition. But should it stand in benign indifference to the real facts on the ground, or should its artistry remove the actual sting of death by using abstraction to make it more “humanitarian”, and therefore “universal” ? It’s a tough balancing act because the road to hell can be paved with good intentions.like just another Childrens’ Crusade because “we” have truth and justice on our side, and I don’t just mean the West’s current obsession with propping up Ukraine. Still, it’s impossible to know what “the judgment of history ” will make of “Home Within ”  because “ the Syrian Crisis”, though ongoing, has been put on the back burner as if it never happened. And doesn’t the West believe that the Middle East will always be that really bad and embarrassing neighborhood which “good people ” will just have to avoid. Civilization and its discontents — pace Freud — didn’t start in London, Paris, or even Kyiv. But Azmeh and company make their real and imagined Syria feel true and necessary. But let’s not forget that a dramatic presentation of any real historical event isn’t actual history — we don’t go to Shakespeare to learn the awful truth about the royals he wrote about — but to experience something which excites and hopefully moves us, and “Home Within” does both. It also comes off as a more sophisticated and accomplished version of their earlier one — www.youtube.com — because that one seems to have been made by two artists who were still in school while this one shows what they’ve learned in the frequently treacherous school of life. And it didn’t hurt that they’ve added five musicians who have increased its scope and depth. It also surely benefited from the fact that the Silk Road Ensemble was touring it before they landed at Stanford’s elegant and commodious Bing Hall with its superb sound capabilities designed by Yahisa Toyota of Nagata Acoustics as “www.nagataacoustics.com “.

But writing a piece of this length and ambition is a challenge for any composer. It’s also Azmeh’s first long- form work which occupies more or less the same position in his output which Philip Glass and Steve Reich’s first ones — “Music With Changing Parts ” (1970), and ” Drumming ” (1971) do in theirs. His music is always dramatic and lyrical and complements and extends Mourad’s elaborately layered images which were stored in his computer, and projected, then subsequently drawn by him, and projected live in real time on the Bing’s enormous curved screen, Two or more time(s) were always present. The “pictured ” sound and the played sound also changed their discrete and unfolding meanings as if they were literally living and dying. This performance also foregrounded the fact that we’re forever internalizing / interpreting what and how we see and hear, especially at this performance where unknown things come at us slow, or fast and furious. Mourad’s continuous montage of cities, landscapes and people were not unlike those in Godfrey Reggio’s equally somber and equally powerful 2002 silent film he did with Philip Glass, “Naqoyqatsi ( Life as War )”.The low lighting — no spots — kept the house in almost total darkness so that the projected images could be seen; the music heard and felt as something both real and metaphorical. Its modernity, or even postmodernity, if you will, comes from the fact that each member of the audience is asked to participate and complete it on their own personal, individual terms because home, as we think of it now, is rarely a stable but continuously changing construct or dream. And dream had to be the operative word here. Why? Because “Home Within ” starts with a “keyless” gesture on Azmeh’s clarinet which sets its tone and establishes its unseen but inevitable course; and war is just as preordained as peace.

Azmeh and Mourad have co-composed a very striking performance work which needs to be experienced live, and not as a simulacrum of one, on your laptop, or phone.The most riveting — could we please banish that word ? — moments came when Azmeh’s solos erupted with the ecstatic sadness which runs through his work. His company furnished this home with expert and deeply evocative unison playing and subtle interlocking solos which never obscured its structure or intent. The musicians here were — Layale Chaker — www.layalechaker.com violin; www.karenouzanian.com cello; Issam Rafea, oud ; Shane Shanahan — www.shaneshanaham.com — percussion; with Sean Conly — www.seanconly.com — double bass.

Michael McDonagh is a San Francisco-based dramatist, filmmaker, and writer on the arts. and poet. His third fine art book with San Francisco-based painter www.garybukovnik.com is ALL KINDS OF WEATHER (2016) www.norfolkpress.com. His first “Before I Forget” can be seen at the www.nypl.org — Bryant Park.