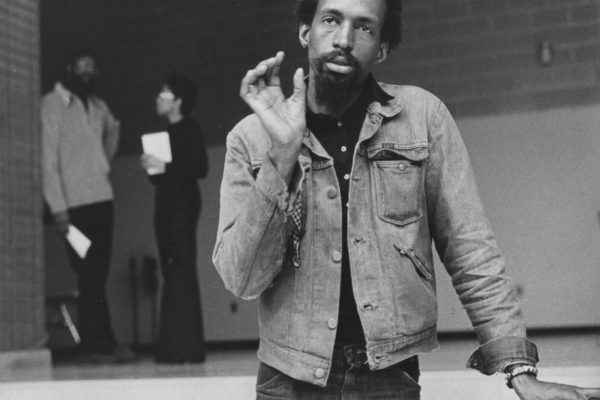 We like to that think music is easy as pie. Composers hear it in their heads, write it down, have it played, and all the audience has to do is listen.

But nothing in this world is easy and almost every composer — save perhaps Gordon Getty and the late Elliott Carter, whose family made its fortune with Carters’s Little Liver Pills — struggles to have their music played.  And let’s not forget that Mozart fought to have his music played even in Vienna where the competition was stiff. But then musicians are like everyone else. They feel misunderstood and this is especially true if you’re from a perceived minority like black and gay composer Julius Eastman (1940-1990) who thrived off and on in the fiercely competitive downtown New York scene of SoHo and the East Village in the mid ’70’s and ’80’s, and died alone and nameless from AIDS in an upstate New York hospital. And so the task of listening and judging what we’re listening to when we hear Eastman’s music becomes fraught with more than one issue — though I prefer the old school ” problem ” which is a wee bit more honest — and way more complicated. Should we applaud and/or champion Eastman’s music because he’s black and gay, or for what we really feel about it, and what it says to us?

Is it alive and kicking, or does it put us to sleep, and no less an “eminence ” than my late gay composer-critic friend Virgil Thomson ( 1896-1989 ) said to me re: music. ” You have to make a game of it or the whole thing gets sleepy and dies”. Or should we see Eastman’s music as a cultural side dish off the main drag?

These questions were posed but not entirely answered by the program that gay Italian-born composer Luciano Chessa  ( Sardegna, of  D.H. Lawrence’s ‘Sea and Sardinia ” ) presented here, and  Eastman’s “Prelude to the Holy Presence of Joan of Arc ” (1981 )  served  to mirror Chessa’s less successful efforts with chant form. Shostakovich may have played his nineteenth century “suffering artist ” card to the hilt but that doesn’t mean his compatriot Prokofiev’s card is of less value, because it almost always comes down to how one’s publicity, or how your brand makes its mark,and Shostakovich and Mozart and Schubert’s brands are now a fait accompli, and maybe Eastman’s will follow in short order ? Who knows?

But Chessa’s program of Eastman’s music came and went with nary a ripple on the first half though the one in its second  almost sixty minute second half — “Crazy Nigger ( 1979 )” which four expert pianists — Chris Brown; Luciano Chessa; Regina Myers; Riley Nicholson;, plus Patti Deuter ; Stasie Famalgaut; Ric  Louchard;  and Maia Ziaee, sounded super precise — with stabbing seconds juicing its often off on the beat flow — and utterly committed, though it seemed  to recall and/or absorb the discoveries that Philip Glass made in his now seen to be seminal sixty-minute plus ” Music With Changing Parts ” ( 1970 ),  and which Steve Reich made in his more ambitious and now classic ” Drumming ” (1971), but dare I say it? — it’s always a question of one’s gift and what one manages to do with it after all the cards have been played, and I think that the roads Eastman’s music has travelled  will be the province of the few, which is never a good, or bad thing, despite or even in spite of the loving attention that these musicians gave to these deserving but mostly not quite memorable works. And who could ask for anything more than devotion sincerely applied?

(25661)
$23.81 (as of January 24, 2021 - More infoProduct prices and availability are accurate as of the date/time indicated and are subject to change. Any price and availability information displayed on [relevant Amazon Site(s), as applicable] at the time of purchase will apply to the purchase of this product.)

(12303)
$5.99 (as of January 24, 2021 - More infoProduct prices and availability are accurate as of the date/time indicated and are subject to change. Any price and availability information displayed on [relevant Amazon Site(s), as applicable] at the time of purchase will apply to the purchase of this product.)
related posts