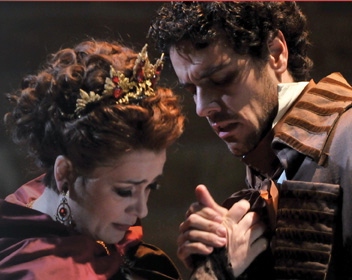 By Giacomo Puccini
Conducted by Corrado Rovaris
Directed by Jonathan Eaton
Opera Company of PhiladelphiaAcademy of MusicApril 29-May 8, 2011

Even with its squirrelly plot points, Puccini’s “Tosca” draws you into its spell as a psychosexual thriller with gorgeous arias. In the Opera Company of Philadelphia production at the Academy of Music, Jonathan Eaton, the director, turns up the violence and the sex, not to mention some of the camp. Who can resist a knife-wielding diva in a to-die for red velvet empire gown? The OCP orchestra’s narrative thrust supported all of the dramatic action, but it was also so detailed in the quieter passages that conductor Corrado Rovaris gloriously painted them Puccini.

Romanian soprano Adina Nitescu, making her OCP debut, plays Tosca and has good chemistry with Brazilian-Italian tenor Thiago Arancam, who plays her lover, Cavaradossi. At the matinee performance May 1, Nitescu seemed tentative in the first scenes, but bloomed vocally late in the first act.

Cavaradossi, an artist, is protecting escaped prisoner Angelotti in the church where he is painting a fresco. Tosca is obsessively jealous (shameful diva behavior), whipping up rages over how beautiful the women are in the frescoes. Except for Cavaradossi’s aria, Act I of this opera is not very interesting musically, compared to what follows in later scenes. Not helping either was Eaton’s static pacing here, despite a lot of frenzied stage business.

Meanwhile, completely pumping it up is Kevin Glavin, OCP’s basso, who rescues with some great character acting and vocal élan as the sacristan. Daniel Mobbs is also well cast as the prisoner Angelotti. The chorus enters for vespers, along with Russian baritone Boris Statsenko as the venomous Baron Scarpia, who lusts after Tosca and frames Cavaradossi. Although it’s unclear exactly how, Tosca ends up in his lair.

Later, Tosca puts her insane jealously aside when she sees her man in shackles about to be tortured for information. When Tosca grabs the knife off the table to stab the Baron rather than trade sex for Cavaradossi’s freedom, you believe it. Stepping up her game, Nitescu just commands in these scenes, with gorgeous legato lines and steely expressiveness.

Statsenko is a sneering villain, and he plays it with relish; his moves on Tosca make your skin crawl. Otherwise, he is vocally fun in his booming menace, even when he borders on camp. Meanwhile, Rovaris and Eaton deftly pace the explicitness of prisoner torture, Tosca’s molestation and the Baron’s stabbing. Act III’s highlight “E lucevan le stelle” aria is becoming a signature for Thiago and indeed, at this performance he delivered its triumphal beauty and visceral power. As for Tosca’s diva-dive high from the prison ruins, we’ll have to guess if it was the real Tosca or a body-double a la “Vertigo.”