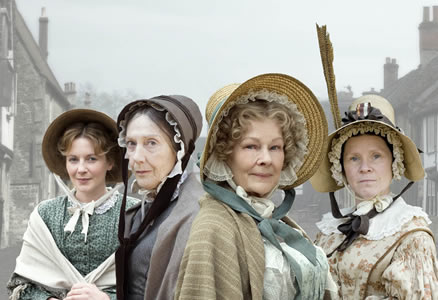 Brimming with the finest English actors, directed with great skill, finished with high production values and based on the entertaining and insightful writings of Elizabeth Gaskell, Cranford is simply an all-around pleasure to watch.

Cranford is a sleepy 1840’s English village, in which the townspeople’s eccentric code of antiquated customs are inexorably yielding way to the formation of a new middle class, the tentacles of the new railway system and the effects of the industrial revolution.

Against this subtle background of socio-economic change, are charming and engaging vignettes of life in Cranford, with its enduring friendships, restrained and confused romances, pervasive gossip, petty jealousies, ruinous bankruptcies, calamitous illnesses, and sudden death.

The genteel class in Cranford is largely comprised of women, either “spinsters” or widows, who live in pairs in rented houses and maintain a façade of financial security that belies their actual meager economic circumstances. Subsisting on small amounts of inherited money, and believing work or shop keeping beneath them, they live out their days, comforted by their stringent mores of class and propriety. Some are happy as “spinsters,” others fall victim to romantic fantasies, and several find true love.

Leading the magnificent cast are Dame Judi Dench (Casino Royale) and Dame Eileen Atkins (Cold Mountain) as Matty and Deborah Jenkyns, two unmarried sisters. The elder Miss Deborah is the stern enforcer of Cranford’s decorum, while kind-hearted Miss Matty abides by her sister’s wishes in spite of her own more humane tendencies. When a series of tragedies strikes Miss Matty, her friends rally to help her through her difficulties; and she emerges stronger for it.

Imelda Staunton (Vera Drake) is the silly Miss Pole, who prides herself on being the first with the hottest gossip and delivers the news using her theatrical imagination rather than facts.

Simon Woods (Rome) is the young and handsome, newly arrived Dr. Frank Harrison, whose modern treatment methods shock the townsfolk, but save lives. He inadvertently seems to have become engaged to three ladies at once, but his heart belongs to the Rector’s daughter, Sophy, acted by the appealing Kimberly Nixon.

The poignant subplot about young Harry Gregson, acted by the talented Alex Etel, is a switch from the predominant Jane Austen motif to a Dickensonian theme. Harry, who learns to read and write despite the remonstrations of his loutish poacher father and Lady Ludlow, is taken under the wing of the kindly Mr. Carter. Ultimately, Harry’s future education and upward mobility are assured, but by means that greatly sadden him.

Originally serialized in 1851 in a magazine edited by Charles Dickens, Elizabeth Gaskell’s novel Cranford served as the nucleus for this new production, which has been expanded to include characters and incidents from two of her stories, “My Lady Ludlow” and “Mr. Harrison’s Confessions.”

The fictional Cranford is modeled on rural Knutsford, near Manchester, where Elizabeth Gaskell spent much of her childhood amid scenes very much like the ones depicted in this loving tribute to a bygone England.

While watching Cranford, I often smiled, occasionally grew teary and was always fully engrossed. Cranford is a captivating production with universal themes. Don’t miss it.