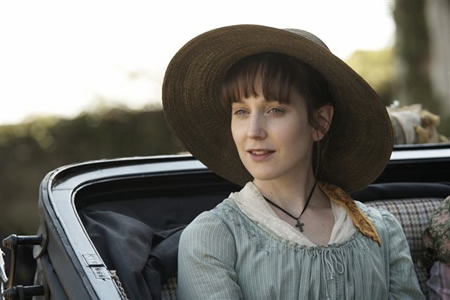 A grand new production of Sense and Sensibility marks Masterpiece Theatre’s best and last of its series, The Complete Jane Austen.

Award winning writer Andrew Davies, who also wrote the screenplay for Northanger Abbey (as well as the BBC/A&E versions of Emma and Pride and Prejudice), has written an adaption that is largely true to the novel yet shines with new vitality.

The performances are terrific. The direction, production values, the costumes and the locations in London and Berkshire, Surrey, Buckinghamshire and Devon are all first rate. However, a graphic seduction scene before the opening credits made me think, “This can’t be Jane Austen” and the gratuitous shots of the ocean whenever a scene change occurred were annoying.

Hattie Morahan (The Golden Compass) is authentic as Elinor Dashwood, the older, levelheaded sister who is good-natured, considerate and discreet. Charity Wakefield (Jane Eyre) plays her impulsive, outgoing, younger sister Marianne, whose impetuousness could lead to her ruin.

Janet McTeer (The Amazing Mrs. Pritchard) stars as the girls’ mother, who is left virtually destitute by her spineless stepson, John Dashwood (Mark Gatiss, The Wind in the Willows) and his wicked wife, Fanny (Claire Skinner, Bridget Jones’s Diary). Lucy Boynton (Miss Potter) is charming as the youngest Dashwood sister, Margaret, who is frank and blunt as only a bright child can be, often to her sisters’ displeasure.

For avid Jane Austen fans, who loved the 1995 film version starring Emma Thompson and the then unknown Kate Winslet, it may take a slight attitude adjustment to appreciate the new script and cast. But the new production holds up splendidly. Since it is one hour longer than the 1995 film, it is generally more faithful to the book and includes all the scenes and minor characters.

So curl up and savor this enduring romantic tale of sense and sensibility in which the more passionate aspect of Elinor’s nature is liberated while Marianne matures and finds a reserve of rationality, thus assuring happy endings for them both.