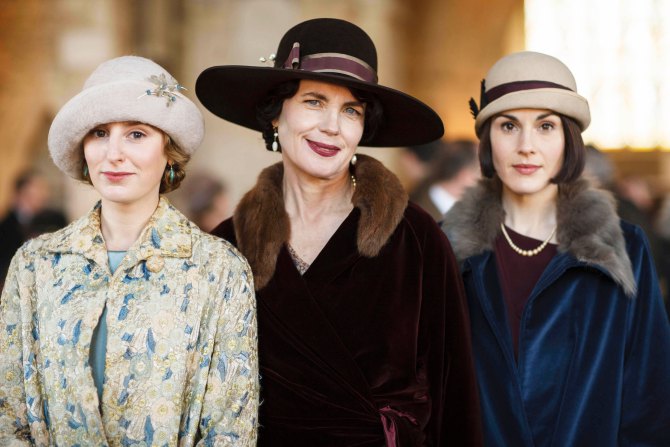 Written and created by Julian Fellowes

“The world is a different place from the way it was, my Lord. And Downton Abbey must change with it,” Mr. Carson (Jim Carter) tells Lord Grantham (Hugh Bonneville).

It’s hard to believe that the last season of “Downton Abbey” is upon us. Yet, in retrospect, there have been lots of rumors about its demise. The brilliant creative force behind the series, Oscar-winning Julian Fellowes, had agreed in late 2012 to develop “The Gilded Age,” a costume drama chronicling rich New Yorkers in the 1880s for NBC Universal. There has been little progress made on the series, partially because of Fellowes’ commitment to Downton. Fans wondered how much longer Fellowes could delay his commitment to NBC.

There was buzz that Lady Cora (Elizabeth McGovern) might die, joining Lady Sybil (Jessica Brown Findlay) and Cousin Matthew Crawley (Dan Stevens) in sudden death, because McGovern was interested in leaving the show. And on March 1, 2015, Dame Maggie Smith, in a Sunday (UK) Times interview, said that she would leave the show after Season 6. “They say this is the last one, and I can’t see how it could go on. I mean, I certainly can’t keep going. To my knowledge, I must be 110 by now. We’re into the late 1920s.” Actually her character, the Dowager Lady Violet, would be about 82. However, this statement was quickly retracted by her publicist.

Then on March 26th, the coup de grâce: Managing Director of Carnival Films (purchaser of ITV) and executive producer of Downton, Gareth Neame, made the dreaded statement. “Inevitably there comes a time when all shows should end and ‘Downton’ is no exception. We wanted to close the doors of ‘Downton Abbey’ when it felt right and natural for the storylines to come together and when the show was still being enjoyed so much by its fans.”

Some have thought that the last two seasons dragged a bit and that Downton had lost its vitality. Yet I have continued to be intrigued with the series. What other TV drama in recent memory has the well-crafted characters, cultured writing, tight directing, fine acting, and gorgeous costumes, sets and high production values, all woven into such an exciting historical background? Judging from the fact that more than 25.5 million viewers watched Season 5, one can’t belittle the show’s immense and, in my mind, well-deserved popularity. It has received 51 Emmy® nominations and won 11 Emmys®, three Golden Globes®, three Screen Actors Guild Awards, a Producers Guild Award, and three BAFTAs.

Season 5 of “Downton Abbey” was filled with romance. The ever more acerbic Lady Mary (Michelle Dockery) rejected two suitors and found a new possibility. Lady Rose (Lily James) married her Jewish Prince. We were surprised that Lady Violet loved a Russian prince way back when. And Mr. Carson and Mrs. Hughes (Phyllis Logan) agreed to marry. Even the rejected and dejected Lady Edith (Laura Carmichael) found some happiness by having her daughter Marigold live at Downton. Sadly, we lost Tom Branson (Allen Leach) and his daughter when they left for Boston. Lord Grantham’s dog Isis, died, although he still stars in the Season 6 intro and credits.

Despite the sadness over the end of our Downton addiction, please try to enjoy this great last season of eight exciting episodes plus the finale. It’s the best one yet, with many happy and sad revelations. The season begins six months after the end of Season 5. It’s mid-1925, a time of love and expanding opportunities for the Crawleys as well as their downstairs denizens. Most of the Downton staff face the future with optimism. Not so Mr. Carson, who clings to the strictures of the past. We will gain new insight this season into the lives and hopes of the Crawley family and Mrs. Patmore (Leslie Nichol), Molesley (Kevin Doyle), Thomas Barrow (Robert James-Collier), the ever mysterious John Bates (Brendan Coyle) and his wife Anna Bates (Joanne Froggatt).

Critics were sent all the episodes, except the finale that airs on March 6, 2016. As of the time of this writing, we’re all equally in the dark about the ending. Will all the loose ends be tied up in a satin bow with a happy ending, or will Julian Fellowes leave us with a more realistic conclusion in which not everyone is alive and well? At this point, I’m not sure which result is preferable. As Garett Neame said in an interview, “The narratives of these fictional people will continue once the camera moves away. They will move on into the future.”