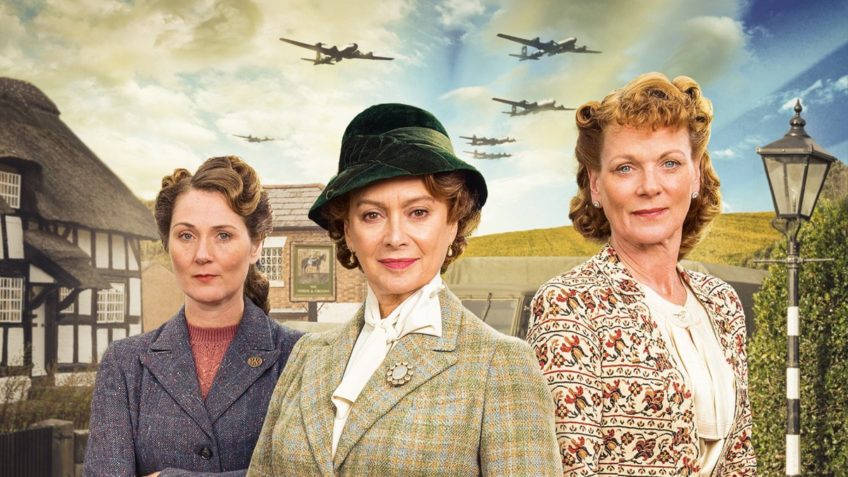 Stories of English heroism during World War II never fail to inspire me. They also make me wonder how I would have managed had I lived in a rural English village, like the Cheshire village of Great Paxford, during that long and brutal war.

In the excellent, well-written six-episode drama, “Home Fires” airing on PBS Masterpiece starting on October 4, 2015, we follow a group of admirable women, who, although separated by age, advantage and attitude, join together in the Great Paxford branch of the Women’s Institute to organize collections and settle evacuees. They also help feed the country during the war by growing food and bottling, jamming, canning and pickling. This first season (another season is already in the works) starts in August 1939, one month prior to the invasion of Poland and ends with Dunkirk in May 1940.

By the way, the British Women’s Institute was founded 100 years ago during the First World War. Its most important service was to help supply home-grown food for the country, since German war ships prevented the importing of food on which Great Britain relied. It was, and still is, a vital organization with over 200,000 members in 6,500 Women’s Institute branches in every village, town and city in the UK.

The understated and finely-acted “Home Fires” was inspired by the nonfiction social history “Jambusters” by Julie Summers. The series is largely character-driven, with the struggles and problems of the women of the home front and their relationships taking center stage. The male characters — boyfriends and husbands, are, for once, seen only to the extent they affect their girlfriends and wives. The village scenes, the houses, clothes and hair styles cement the reality of the era, while the bucolic country scenery forms an incongruous background to the worried village.

Great Paxford’s Women’s Institute is dominated by two women. Joyce Cameron (Francesca Annis), the affluent and domineering president of the Institute, proposes that the group disband until the end of the war. Spirited and equally stubborn Frances Barden (Samantha Bond) opposes her and forces a vote for the Presidency. In a cameo, author Julie Summers (wearing a brown hat) presides over the election. The rivalry between these two strong women continues throughout the episodes despite the harm it sometimes cause to others.

There are many members of the Institute, and at the beginning of the series it is a bit confusing to identify them and their male companions. I found that identifying them by occupation was the easiest way to remember them. For example, tall, blond Alison Scotlock, is a bookkeeper, who has been a widow since World War I. Neat and thin Erica Campbell runs the medical clinic for her husband, Will, and is the mother of Kate and Laura. Heavy-set Pat Simms, always in an apron, is the cowed wife of cruel and callous one-hit-book Bob. Brunette Sarah Collingborne is married to Adam, the vicar, and is Frances Barden’s sister. Fair-haired Miriam in the blood-stained apron works in the village butcher with her husband Bryn and teenaged son David. Attractive, isolated Steph Farrow, the only woman who wears pants, farms their land with husband Stan and son, Little Stan.

As men (and a few young women) enter the armed forces, the reality of war sinks in. Interestingly, the older men rarely discuss with their significant others their quandary over whether to join the service. But, in keeping with the series’ emphasis on women, we see mothers and wives react with varying levels of heartache as sons and husbands leave the village.

But with resolve, the women pull together to help their nation when it needs it most. And as is true for the men in the armed forces, the women slowly discover the strength and inner resources that transform their lives.