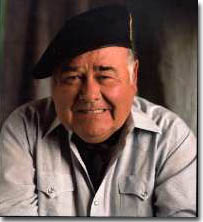 Jonathan Winters is a difficult talent to categorize, which may help explain why he has been so under-utilized by Hollywood. The latest example of this dropping of the ball is the recent flop Rocky and Bullwinkle, in which Winters has three roles, none of them lasting more than a few seconds. Certainly Winters is well-known, and oft-cited as an influence and comic genius, but many people may not know why. Jonathan Winters: On the Loose sets the record straight.

After starting out as a morning deejay in Dayton, Ohio, Jonathan Winters set out to hit the big time in New York. Unsurprisingly, coming from the world of radio, his early act relied heavily on impressions and vocal sound effects, all of which Winters created live on the spot. One of his earliest television appearances, on a talent-scout program called Chance of a Lifetime, is presented here for the first time since its initial live broadcast. His routine was surprisingly polished, and led to his own television show as well as regular appearances on The Andy Williams Show and the original Tonight Show with Jack Paar. His act evolved from celebrity impressions to his own roster of homegrown characters to free-form improvisational weirdness. Movie work followed, the best known of which is probably 1963’s It’s a Mad, Mad, Mad, Mad World.

Winters’ talent is a mercurial one. His penchant for winging it makes for a less than perfect batting average, and some of the things he tries out simply fall flat. When he’s on, though, the laughs can become contagious. Among latter-day comedians trumpeting Winters’ influence, none has been more vocal than Robin Williams. Watching On the Loose, it’s easy to see why. This rare opportunity to view extended clips of Winters doing rapid fire improvs with a collection of hats or even a plain wooden stick reveals just how large a debt Williams owes Winters for his entire shtick. Williams is interviewed here, and he trots out the same wheezy repertoire of voices he’s been coasting on for twenty years. By contrast, much older clips of Winters at work still feel fresh – they haven’t suffered from overexposure.

Writer/producer/directors David Leaf and John Scheinfeld have matched the remarkable archival achievement of their previous documentary The Unknown Peter Sellers. Their earlier collaboration suffered from rapid-fire editing; viewers barely got a glimpse of the rare footage uncovered. Not the case with On the Loose, probably because it has been made for public television, whose audience presumably has an attention span longer than that of a hummingbird.

On the Loose also has the edge because its subject is still very much alive. Winters himself guides us through his life and career, and he has a warm, grandfatherly presence that belies his somewhat distant brand of comedy. His family confirms this impression, speaking very fondly about the man and his work. It’s a kick to see Winters watching some of his old routines on television – a 60’s appearance with Rosie Greer in which Winters does a black dialect particularly cracks him up. The joy he takes in his own work is infectious, and On the Loose captures it beautifully.