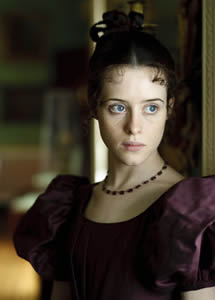 A new, noteworthy and timely BBC/WGBH adaptation of Dickens’ Little Dorrit by award winner Andrew Davies (Bleak House, Northanger Abbey, Sense and Sensibility, and BBC/A&E versions of Emma and Pride and Prejudice) will be aired on PBS’ Masterpiece Classics beginning on March 29, 2009 and ending on April 26, 2009.

Little Dorrit’s relevance to the financial woes of 2009 is remarkable. There is even a character who could be Bernie Madoff’s double; and he causes as much damage. Aside from the demise of debtors’ prisons, not much seems to have changed since the 1820s London setting of the novel.

Much of the action is set at Marshalsea debtors’ prison, the same prison in which Charles Dickens and his family were forced to live for several months. William Doritt, a fallen gentleman (wonderfully played by Tom Courtenay, The Loneliness of the Long Distance Runner, The Golden Compass) has lived there for so long that he is known as the “Father of the Marshalsea.”

The eponymous Little Dorrit, whose given name is Amy (newcomer Claire Foy deserves much applause), has lived in Marshalsea for all of her twenty-two years, although, unlike her father, she and her siblings are free to come and go.

Poor Amy Doritt is manipulated by her selfish, weak and pretentious father into catering to him, to her own detriment. Her self-absorbed, low-class, cockney-accented sister Fanny (Emma Pierson) works as a burlesque dancer and her brother is honing his skill as a slacker.

But one day she is summoned by a stranger, the fierce, indomitable, though housebound Mrs. Clennam (nicely acted by Judy Parfitt, Girl with a Pearl Earring). Mrs. Clennam lives with her crafty servant Jeremiah Flintwinch (played by wonderful character actor Alun Armstrong, Bleak House, New Tricks) and his downtrodden wife, Affery (Sue Johnston). Mrs. Clennam is determined to employ Amy, for secret reasons yet to be determined.

As Mrs. Clennam’s seamstress, Amy meets Mrs. Clennam’s son, Arthur (Mathew Macfadyen, Pride and Prejudice), who, after working abroad for twenty years, has returned to London upon his father’s death. Amy is taken with Arthur, but he only sees Little Dorrit as a young friend.

Arthur is curious about his mother’s uncharacteristic kindness to Amy. Could it relate to his father’s intriguing last words? He seeks to uncover the truth about Amy’s connection to his mother; he also wants to help the Dorrit family. In attempts to understand Mr. Dorrit’s plight, Arthur visits one of Dickens’ most satirical creations, the Circumlocution Office—a bureaucracy reminiscent of Kafka’s The Trial.

Aided by an unforgettable Dickens character, debt-collector Pancks (Eddie Marsan is first-rate), Arthur discovers that William Dorrit is the lost heir to a large fortune, so that Dorrit is finally able to pay his way out of prison.

Dickens’ social commentary continues with his jabs at the nouveau riche William Dorrit as he takes the Grand Tour and retains a designing etiquette coach for his daughters. Dickens also takes aim at the upper classes, who do nothing yet expect everything.

Little Dorrit has numerous characters and complex subplots, too many to describe here. That is part of what keeps one’s interest in this adaption, yet confusion reigns as characters come and go throughout the episodes; many simply disappear without any conclusion. What happened to the mysterious Miss Wade and young Tattycoram? And what about Pet Meagles?

A French murderer, Rigaud (unfortunately overplayed by Andy Serkis, Lord of the Rings) lurks through each episode. He has damaging information that Mrs. Clennam wants to remain private. At the end of Little Dorrit, Rigaud explains her secret: the true connections among the characters. But between his exaggerated French accent and his overblown Gallic affect (think The Pink Panther meets The Pirates of the Caribbean), I found it difficult to comprehend the complicated relationships he too quickly reveals.

The hasty but happy ending of Little Dorrit didn’t diminish my overall enjoyment of it. With a stellar cast and a fine adaptation, Little Dorrit is absorbing and entertaining.

By the way, do you know about A Dickens Glossary for American Readers by Fred Levit (Hall Design, Inc. 1996)? It is a comprehensive glossary containing over 2800 entries, including hundreds of quotations, phrases and Briticisms, as well as definitions of words and phrases whose meanings have changed through time or have been lost with vanished technologies.