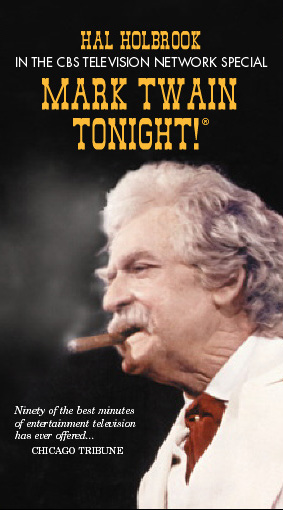 Mark Twain, most often classified a humorist, was indeed that, in the very best and deepest sense of the term. Comedy, we know, is far more difficult than tragedy. The humorist must be a canny observer of the human experience, learn life’s lessons, and then share with us what he has learned with a lightness and twist of irony that can make us smile or laugh, even as we recognize the often painful truths beneath the surface.

Twain, rooted in midwestern 19th century America, offers an historical perspective, but, as well, in his abiding humanity, his message is timeless and universal. From his writings, actor Hal Holbrook assembled a one-man show, Mark Twain Tonight!, which garnered him a best actor Tony Award in 1966; Holbrook was just past 40 then and played Twain at age 70. (Now in his 70’s, he is still appearing in the show, and, last we heard, is married to glamorous actress Dixie Carter.)

In 1967, CBS Television telecast the show which was, fortunately for succeeding generations, preserved on tape. An enterprising video distributor, Kultur Video, has re-released the video and it is a most pleasurable hour and a half. Taped in a theater, in front of a live audience, the video captures well the immediacy and the superb performance that Holbrook offers. As a man in the first blush of his 40’s, he is utterly convincing playing this wry old eccentric of 70. Puffing away at his cigar, suffering from gentle memory lapses, even, at one point, nodding off in the middle of a story, Holbrook has caught the mannerisms, the voice and inflections, the very essence of his subject. The subject matter ranges from railroads to dachshunds, from smoking to Mariah Whittaker’s glass eye. Twain was not above aiming his irreverence at himself: "I was looking for a job out in San Francisco. I was very particular about the kind of job I would get. [pause] I didn’t want to work…so I became a newspaper reporter."

Scattered throughout are jabs at politicians, such as this observation of the U.S. Congress: "I had never seen a body of men with tongues so handy and information so uncertain." Nothing ever really changes, now, does it? It isn’t all humor; there is, for example, a captivating and memorably lyrical description of a sunrise over the Mississippi River

Two more extended segments are the ghost story, The Golden Arm, which Holbrook performs as told by a black "uncle" on a family farm, and a passage from Twain’s masterpiece, Huckleberry Finn, for which Holbrook takes the role of Finn. In both cases, though, the astounding actor is playing Twain playing a role – both Twain and the uncle, both Twain and Finn are there at the same time. At one point in the Finn segment he suddenly becomes Finn’s angry and drunken father – the transition is instantaneous and dramatically startling. The stuff, in short, of which Tony awards are spun.

How to Tell a Story and Other Essays (Oxford Mark Twain) (1996), Mark Twain