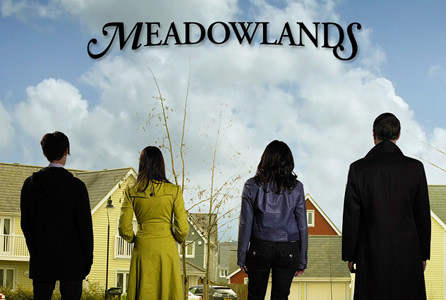 Meadowlands is the quintessential paranoid fantasy of a suburb…a community

that appears to be safe, bucolic and picturesque, but actually has a

witness protection program and have been moved to the town of Meadowlands.

witness protection escaping their secret criminal pasts. And it appears

retribution by the outside world.

But of course, the residents can’t change their past and their basic nature.

As a result, no one in Meadowlands is who he appears to be. And more

importantly, there isn’t one character in Meadowlands who is sympathetic,

Filmed in Maidstone, in the English county of Kent, by Ecosse Films, and

with an all English cast, Meadowlands is a very slick production. It’s all

about the mysterious undercurrents of evil that permeate the atmosphere of

the town, but Meadowlands has no heart.

And at least from the pilot episode, Meadowlands doesn’t have much of a plot

either. We are introduced to the Brogan family and to a series of their

bizarre, unbalanced and evil neighbors. I chose not to see any other

episodes. But some fans of psychological thrillers of the Twin Peaks genre