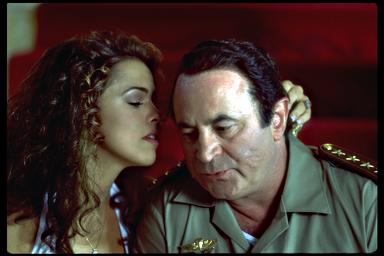 In Defiance: The Battle Against General Noriega Fought from Panama’s Embassy in Washington

On December 20, 1989, American armed forces in Panama were ordered into combat by President George Bush, ostensibly on the grounds that the nation’s unofficial leader, General Manuel Antonio Noriega, had declared Panama to be in a state of war with the United States. Noriega – a longtime intelligence source for the CIA, dating back to Bush’s term as the agency’s director – had been indicted by a federal jury in Miami on a drug trafficking charge the previous year. After Noriega undermined his country’s supposedly democratic elections in 1989, tensions flared; when the general gave speeches denouncing the U.S., American troops were deployed. Surrounding the Vatican embassy where Noriega had taken refuge, "Operation Just Cause" utilized unconventional means of psychological warfare, shining bright lights and blasting rock and roll music at all hours of the night until the general surrendered.

It all sounds like an Oliver Stone movie, and it almost was. Stone was set to shoot Lawrence Wright’s Noriega script in 1994 with Al Pacino starring as the Panamanian strongman, but his attentions turned to Nixon and the screenplay gathered dust. Now Showtime has resurrected the project with Roger Spottiswoode in the director’s chair and Bob Hoskins in the role of the "pizza-faced tin pot dictator," Tony Noriega. The resulting biopic is a dubious mix of watered-down politics and broadly staged farce – a comic book disguised as a history lesson.

God’s Favorite skips over Noriega’s rise to power, concentrating instead on his last several years as Panama’s despotic ruler. Dr. Hugo Spadafora, a vocal left-wing critic of the general’s policies, is found in the jungle with his head cut off. This brutal murder, attributed to Noriega by his enemies, energizes the opposition in Panama. But the blithely unconcerned dictator goes about his daily life, getting skin peels in Geneva, meeting with Castro in Havana, fooling around with his mistress and talking to his pet parrot. The turn in Noriega’s fortunes begins when his embittered former second-in-command goes on television to reveal details of the general’s past crimes. After the fraudulent elections of 1989, members of Noriega’s inner circle turn against him, plotting a coup that backfires, leaving the rebels in a weakened position. Until the U.S. invasion, Noriega truly appears to be what he claims – "always lucky, always God’s favorite."

With his lacquered toupee, putty-like facial scarring and Frito Bandito accent, Hoskins bears little resemblance to the real Noriega. (Was Edward James Olmos busy?) Straining for a larger-than-life portrayal, the actor accentuates the bluster right from the start and has nowhere to go once it becomes apparent that Noriega is losing his mind. His irascible Yosemite Sam characterization alone would have been enough to sink God’s Favorite, but the blame can’t be placed entirely on his shoulders. The real problem is that Roger Spottiswoode (whose distinguished directing resume includes Turner and Hooch and Stop! Or My Mom Will Shoot) never gets around to deciding what kind of movie he’s trying to make. He wavers between blandly competent docudramatics and a too-blunt satirical tone, with the result coming off like an indigestible melange of JFK, Dr. Strangelove and Bananas. His flashcard approach to recent history boils down to a series of cameos – here a contemptuous Fidel Castro, there a golly-gosh Oliver North – all exchanging unwieldy mouthfuls of schematic exposition with the titular tyrant.

George Bush, on the other hand, is seen only in period news footage and referred to fleetingly by the general as "my ol’ friend." With all the screen time allotted for Noriega’s extramarital dalliances and dabblings with voodoo, couldn’t a few more minutes have been spent exploring the American government’s "let sleeping dogs lie" attitude towards his crimes, and subsequent hypocritical turnaround when political expediency demanded it? The eventual U.S. invasion is whitewashed as well, played mostly for laughs while the loss of civilian life is referred to only in the end titles. For all his excesses as a filmmaker, it’s hard to imagine Oliver Stone glossing over Bush’s culpability. His version of God’s Favorite might have generated some election year controversy. This one is about as daring and thought-provoking as a George W. Bush stump speech.