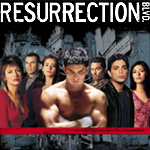 One day a movie or TV show will tell the story of a Latino family as dysfunctional as the family in The Ice Storm &#151; a family whose members resent and avoid one another, take meals together as a matter of resigned ritual rather than community and joy, move to opposite coasts to avoid not only one another, but the quicksand of "the neighborhood" as well. But this is not that day, and Resurrection Blvd. is not that show.

It is, at bottom, a good show. It is at times overly earnest in its attempts to uplift (one waits apprehensively for Edward James Olmos to appear; when he doesn’t, the viewer’s palpable sense of relief can be forgiven), but the characters are compelling, and the story, despite a thuddingly cliched conclusion (leavened somewhat by a genuine shock), is well-written.

We follow the Santiago family. Widowed father Roberto, played by Tony Plana, is a mechanic who is training his son Carlos (Michael DeLorenzo) as a boxing contender. Younger brother Alex (Nicholas Gonzalez) is a pre-med student; older brother Miguel (Mauricio Mendoza) assists in Carlos’s training. Roberto’s two daughters are Yolanda (Ruth Livier), a lawyer, and Victoria (Marisol Nichols), a high school student who is beginning to head in possibly dangerous directions. Across the street lives Roberto’s sister-in-law Bibi, played with all her usual excellence by Elizabeth Pe�a (that may seem like damning with faint praise, but it’s not; Pe�a is a terrific actress who simply gives top-quality work practically every time out).

Carlos wins the fight which will take him to a title bout, but after beating up a neighborhood lowlife who’s slapped Victoria around, he is shot leaving his girlfriend’s house and winds up in the hospital. Naturally, the dire warning is that he "will never box again." Into the breach steps Alex, who leaves med school to train as a boxer himself. The Santiagos have always been boxers. Roberto’s older brother Ruben (Daniel Zacapa) has been left incapable of speech by his fighting career; he lurks in the corners of the scenes, throwing shaky punches at the air and wincing at nothing. He is a startling revenant, and a chilling counterpoint to Roberto’s burning dreams of victory and familial vindication. (When he does at last rise from his chair, at show’s end, it’s in a scene which will shock the breath out of the viewer.)

Alex’s fight is almost a rewrite of Rocky – not surprising since the boxing scenes here are coordinated by Jimmy Nickerson, a veteran of the Rocky series. Alex gets a bigger fight than he ever would in ordinary life, through machination and little else. This, though, is not what makes Resurrection Blvd. the captivating drama it is. That honor falls squarely on the shoulders of Michael DeLorenzo. DeLorenzo’s work as Carlos is acceptable, but little else, until he is shot and nearly crippled. Then something in his eyes begins to burn, a rage which has until then been transferred to the sanctioned violence of the ring. But that outlet is now denied him, and he turns sharply inward."In time of peace, the warlike man attacks himself," wrote Nietzche, and this maxim has rarely been so well dramatized. Carlos becomes a surly drunk, self-destructive and lashing out in all directions as though his family, and even his girlfriend, were adversaries to be beaten back. DeLorenzo has given little indication of this sort of talent or depth in his previous work; he’s to be commended for creating a genuinely frightening character, one who speaks volumes about the fighter’s mindset, and how poorly it translates to a universe not ruled by simple laws of battle.

With an ensemble cast as large as this, a 90-minute premiere movie can in most cases only hope to introduce characters, not delve into them with any real depth. Nevertheless, we come away from the Santiagos knowing enough about them to know that they are people worth watching on a weekly basis. If the writing can consistently hit its high marks (some terrific scenes between Ruth Livier and guest star Nestor Carbonell, and a deeply revealing confrontation between Tony Plana and his boss, played by Cheech Marin) and avoid the cliches evident in the boxing-centered sections, it will be one of the more powerful shows on television this season. For a long time, cable has been beating network on points; if the quality gap grows much wider, the final knockout will be soon.