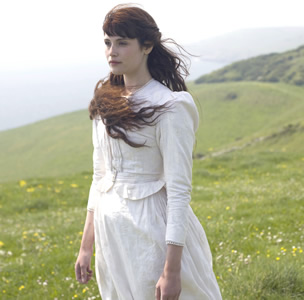 Tess of the D’Urbervilles is a morality tale of love, betrayal, seduction and ultimately, murder. Yet it is also the uplifting story of a young woman who retains her dignity and courage despite the hardships that fate and society have brought upon her.

David Nicholls’ adaptation is largely true to Hardy’s novel, yet shines with new vitality. The many, who like me, were forced to read Tess of the D’Urbervilles in high school and found it plodding and overwritten, will take pleasure in seeing wonderful actors express the essence of Hardy’s notable work.

Gemma Arterton (Quantum of Solace) gives a superb performance as Tess Durbeyfield. Tess’ young life takes a crucial turn after her destitute alcoholic father discovers that he is a descendent of a noble, but extinct, Norman family, the D’Urbervilles. The D’Urbervilles’ ancestral property and baronial title had years before been sold to a rich merchant family named Stoke; they then enhanced their name to Stoke-d’Urbervilles.

The same day that her family’s noble roots are discovered, Tess attends the village May dance. In a charming pastoral scene of green hills and white dresses, Tess and Angel Clare (Eddie Redmayne, Elizabeth: The Golden Age), notice each other. In a fateful turn, just as Angel is about to ask Tess to dance, he is called away by friends.

Tess’ parents pressure her to earn money for the family by ‘claiming kin’ with the rich Stoke-d’Urbervilles. She reluctantly obliges and falls prey to Alec Stoke-d’Urbervilles (Hans Matheson, Dr. Zhivago), a deceiving and dangerous philanderer.

In a tastefully done scene, Alec rapes the innocent Tess. Tess becomes pregnant and gives birth to Alec’s child. The infant soon dies. Tess hopes that her ordeal will remain a secret.

A few years later, Tess and the idealistic but self-deceiving Angel meet again and fall in love. Tess is torn between her love for Angel, and her shame and guilt over her lost innocence. When she finally reveals her dark past, Angel scorns and rejects her. Angel is not able to escape the smug and moralistic teachings of his father, the Reverend Clare.

Victorian society’s pitiless judgment causes Tess to plummet into more heartbreaking misfortunes, which I leave for viewers to experience.

Despite her unfortunate situation, Tess remains brave, pure of heart and honorable—noble in the best sense of the word. In Hardy’s novels, the main characters are often dealt a harsh fate that they must overcome or suffer the consequences.

In Tess of the d’Urbervilles, Hardy yields to Victorian morality by punishing Tess’ ‘sin;’ however, he gives equal time to the prejudice and cruelty of the ‘highly moral.’ Hardy added a subtitle to the novel, A Pure Woman Faithfully Presented, to signal his loyalties.

Hardy also explores the juxtaposition of nature and society’s laws. Hardy sees Tess as a symbol of rural England, a pagan goddess opposing industrialization and Victorian mores and religion. He writes,

“…women whose chief companions are the forms and forces of outdoor Nature retain in their souls far more of the Pagan fantasy of their remote forefathers than of the systematized religion taught their race at later date.”

Director David Blair was able to capture these powerful and provocative ideas discreetly—so that his audience understands them, but is not overpowered by them. Hardy’s story and themes, the wonderful acting, first-rate adaptation, well-chosen locations and impressive direction and cinematography make Thomas Hardy’s Tess of the D’Urbervilles come alive.