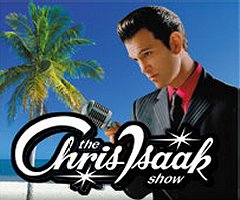 The Chris Isaak Show shouldn’t work. The episodes are overlong, the acting is often amateurish, the quality of the writing is wildly uneven and the jokes tend toward the puerile. But for its first four episodes at least, the new Showtime comedy series is much more enjoyable than it has any right to be. What it lacks in polish and consistency, it makes up for in surreal humor and goofy charm.

The set-up follows the basic Seinfeld template: celebrity-as-self, surrounded by wacky supporting cast, all involved in an interlocking series of misadventures. Rock star Chris Isaak stars as rock star Chris Isaak, a San Francisco musician with a regular gig at a club called Bimbo’s. The members of Isaak’s real life band Silvertone also appear as themselves (along with one ringer, actor Jed Rees (Galaxy Quest) as keyboard player Anson). The cast is rounded out by Kristin Datillo as Isaak’s neurotic manager Yola and Greg Winter as her shark-like associate Cody.

In the pilot episode, Isaak and his band are on location for a video shoot. Nedra, the prim and proper production accountant for the video, displays a hidden wild side when she dances naked in front of her hotel room window – a window that happens to face Isaak’s room. Meanwhile, bandmate Anson pursues a romance with Jodie, a local rancher, and frets over his shortcomings after getting a peek at her horse’s prodigious equipment. Right off the bat, it’s clear The Chris Isaak Show is not aiming for the high road.

Like most made-for-pay-cable series, Chris Isaak takes full advantage of any and all opportunities to bare flesh. In fact, nudity is guaranteed in every episode, thanks to the enigmatic Mona, the naked woman who appears to rotate inside an aquarium behind the bar at Bimbo’s. It’s all done with mirrors; Mona is actually in the basement of the club atop a lazy Susan, and each week she dispenses oblique wisdom to Isaak like a Showtime After Dark version of the midget from Twin Peaks. (Completing the connection, Isaak played a deadpan FBI agent in the big screen incarnation of that series, Fire Walk With Me.)

Cable also gives the show some leeway with regard to running time. Most of the early episodes run roughly 45-50 minutes, or twice the length of a network sitcom minus commercials. This is both an advantage and a liability. On the plus side, it allows room for jam sessions, both musical and verbal. Isaak and his band perform his hits (including "Wicked Game" and "Baby Did a Bad, Bad Thing") and cover tunes in rehearsals and onstage at Bimbo’s, with special guests occasionally sitting in (Junior Brown and Joe Walsh appear in the opening episodes). The performances are recorded live, rather than synched to tape, and their spontaneity complements the likeable, laid back feel of Isaak’s interactions with his band and the rest of the cast. On the other hand, these appealing rough edges too often morph into pointless meandering; the third and fourth episodes are especially slack and could be greatly improved with a little pruning.

Isaak is no master thespian, but he genially goofs on his suave, girl-happy image and isn’t afraid to be the butt of the joke. His band members are likewise unseasoned actors and mostly stay in background, with the exception of drummer Kenney Dale Johnson, who makes a wry sidekick. The fake band member, Anson, has the largest supporting role and garners most of the laugh-out-loud moments. In one episode, a backlog of traffic tickets lands him on a roadwork crew along with fellow ne’er-do-well Bret Michaels of 80’s hair band Poison, who he proceeds to drive nuts with nattering attempts at bad boy bonding. Mostly, though, Anson’s motivation can be summed up as follows: he’s the horniest man alive.

The heart of the show, however, is Kristin Datillo’s Yola. Though she comes off in the premiere as a stereotypical Hollywood ball-buster, her character evolves with unexpected sweetness in subsequent installments. Whether seeking unorthodox treatment for her insomnia or fretting over her position in the company hierarchy, Datillo suggests the horrifying possibility that show biz professionals are human after all.