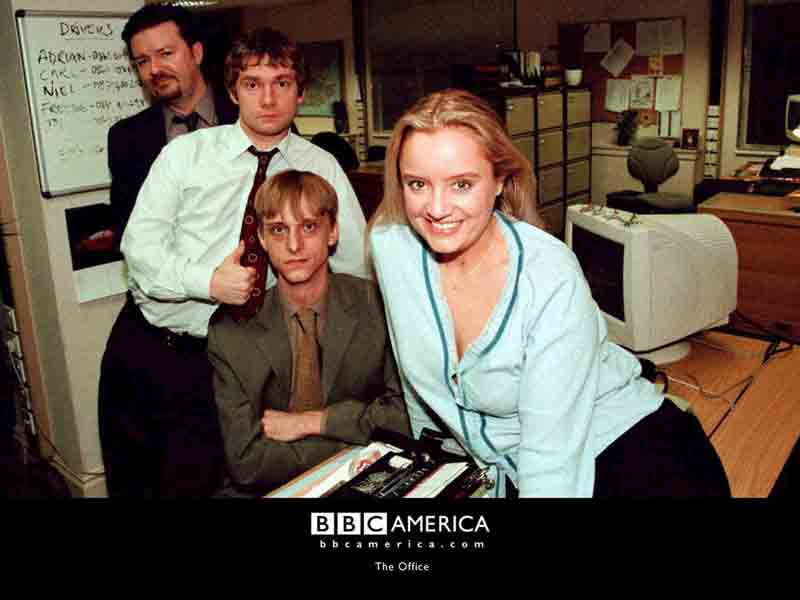 From Survivor to Big Brother to American Idol, Britain is the undisputed master of what has come to be known as "reality TV." All three of those shows started out British (the third originally going by the name Pop Idol). A few years ago, there was a spate of reality shows in the UK which might be labeled "on-site docu-soaps." These serialized documentaries went behind the scenes at various large-scale workplaces &#150; airports, hotels, hospitals, etc. &#150; to reveal the complex inner workings of these outwardly slick operations. Over the course of several weeks, the programs introduced the nation to a colorful range of real-life characters, several of whom went on to become minor celebrities in their own right as a result of the exposure.

Set in the would-be-corporate world of a stationery company in Slough, a drab industrial suburb of London whose name alone is a punch line of sorts, The Office (which is carefully scripted, but shot so as to be indistinguishable from a documentary) is a razor-sharp satire &#150; not only of the above-described televisual endeavors, but also of the day-to-day working lives of the majority of the people who breathlessly tuned in to watch them. Make no mistake about it, The Office is a comedy (one of the funniest to have graced screens on either side of the pond in a long time, in fact) but to watch it is to take a long agonizing look in the mirror, and anyone who has ever worked in any kind of office environment cannot help but being badly rattled by the uncomfortable truths it exposes.

Wernham-Hogg, the fictitious paper merchants in which the show is set, is a drab and soul-destroying place to work–a carnival of pettiness and Sisyphean drudgery presided over by one David Brent, played by Ricky Gervais (the show&#146;s co-writer and co-director). David Brent is perhaps the most jaw-droppingly awful human being to appear on television since Basil Fawlty (and the two are not unrelated). The stocky, goateed Brent is deliciously recognizable but at the same time utterly unique. He is not malicious or cruel &#150; in fact, he prides himself on his sense of humor and the laid-back atmosphere he maintains at work &#150; but he is, as one character calls him in the first episode, "a sad little man." In a nutshell, David Brent is a former class-clown-wannabe (the &#145;wannabe&#146; is crucial here) who has somehow drifted into a position of authority by his mid-30s and is gradually realizing that all the jokes he most wants to make would now be at his own expense. Bereft of any actual work to do, he wanders the hallways wearing a desperate rat-like grin and darting his beady little eyes about, grabbing unsuspecting underlings and subjecting them to his crushingly unsuccessful (often downright uncomfortable) attempts at witty banter and off-color wackiness.

In addition to the train-wreck of corporate doublespeak and bad stand-up comedy that is David Brent, there are several other Wernham-Hogg employees of note. The sallow, skeletal young Gareth Keenan (Mackenzie Crook) is a former member of the Territorial Army (similar to the Army Reserves), and is as humorless as he is dedicated to his low-level position as Team Leader. One of the show&#146;s best running-jokes sees Gareth continually refer to himself as "Assistant Regional Manager" only to be corrected by David Brent, "Assistant TO the Regional Manager." Keenan and Brent both seem like unpopular schoolboys turned loose in the adult world. Brent is the kid who mistakenly thinks of himself as having the quick wit required to befriend bullies and avoid beatings; Keenan is the kid who would cross his fingers and pray to be left in charge of the class when the teacher was called away on an emergency.

Also prominently featured is Tim Canterbury (Martin Freeman), the closest thing The Office has to a hero (although as the season progresses even that is called increasingly into question). Since his job refuses to treat Tim like a serious human being, he has long since stopped treating it like a serious job. He is not openly rebellious, but &#150; to continue the schoolyard metaphor &#150; he is the kid who happily manages to bend the rules while keeping his head down, his grades up, and his nose clean. Some of the show&#146;s finest moments consist of little more than a reaction shot of Tim, either open-mouthed in outright horror, or nodding and smiling in feigned acceptance of a situation. Tim&#146;s tentative flirtations with Dawn (Lucy Davis), the equally above-it-all receptionist trapped in a loveless engagement, are genuinely lovely and moving, and this reviewer found himself praying for an eventual Tim-Dawn union harder than he has prayed for any television couple since Northern Exposure&#146;s Fleischman and O&#146;Connell back in the early 90s.

In note-perfect emulation of its non-comedic predecessors, the show intercuts footage of its hard-working subjects in action with interviews in which said subjects explain their professional philosophies, their feelings about their jobs, and their opinions of their coworkers. The confessional quality of these one-on-one moments adds depth to all the characters, even figures of fun like Brent and Keenan. The true secret of The Office&#146;s success is that it is completely without cutesy characters, quotable punch lines, or laugh tracks. The script is a work of low-key naturalism to rival the best of Mike Leigh or Robert Altman, and the performers are so deft that tears of laughter can be wrung from a well-timed pause, a well-raised eyebrow, or (in the case of Ricky Gervais) a well-flipped tie.

Despite its corporate setting, The Office has a lot more on its mind than Dilbert strips or the Drew Carey Show, both of which traffic in jolly little variations on the theme &#145;You Don&#146;t Have to Be Mad to Work Here &#150; But It Helps!!!&#146; Perhaps the show&#146;s closest cousin is the Mike Judge film Office Space, although while that film&#146;s central character was like Kesey&#146;s Randall P. McMurphy, attempting to escape the asylum by succumbing to its insanity, the characters in The Office are closer in spirit to Beckett&#146;s hopeless tramps, eternally trapped in a pointless, gray existence, clutching at absurd moments of comedy to alleviate the monotony. Yeah, it&#146;s hilarious.