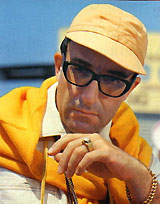 Those who know Peter Sellers only through his long-running stint as the bumbling Inspector Clouseau of the Pink Panther series would do well to watch for this AMC special in their TV Guides. While longtime fans may find it a too cursory gloss on the wide-ranging career of the late great comedic actor, the program should serve, at the very least, to trigger a Sellers binge at the local video shop. Newcomers will likewise want to delve deeper into the rich (if spotty) filmography of this one-of-a-kind talent.

Despite the tabloid title, The Unknown Peter Sellers is not an E! network-style expose on Sellers’s private life. Rather, the ‘unknown’ of the title refers to the large body of Sellers’s work that has been long out of circulation, in some cases never before seen in the United States. Writer-directors John Scheinfeld and David Leaf have cleaned out the vaults and emerged with a wide range of archival footage, including rarely seen commercials and television specials dating back to the 1960’s. Mixing their archeological finds with new interviews (Shirley MacLaine, Richard Lester and David Frost are among the talking heads), Scheinfeld and Leaf have produced a tantalizing, all-too-brief overview of the British funnyman’s onscreen life.

Sellers’s earliest success came on radio with the surreal, madcap Goon Show. He and collaborators Spike Milligan and Harry Secombe proved hugely influential in the world of British comedy, as Monty Python’s Michael Palin attests. Making his leap to the big screen with a small part in the Alec Guiness vehicle The Ladykillers, Sellers soon found his film career aping that of Guiness as he took on multiple roles in comedies like The Mouse That Roared and I’m All Right, Jack. After a more serious turn in The Millionairess met with little success, Sellers turned increasingly to silly fare, with his 1963 Pink Panther role turning into a franchise that would span the rest of his life.

Perhaps predictably, the program treats Sellers’s 1979 Oscar-nominated turn in Being There as his career highpoint, while completely overlooking his triumph in Stanley Kubrick’s Lolita. A much better case could be made for the one-two punch of Lolita and Dr. Strangelove as Sellers’s most enduring legacy. His work in Strangelove is the stuff of legend – three different roles seamlessly integrated into the end-of-the-world storyline, each uniquely side-splitting (the special repeats the oft-noted trivia that Sellers was originally cast in a fourth role, Major Kong, eventually played to perfection by Slim Pickens). And Lolita finds Sellers mining emotional depths and reaching crazed comic epiphanies unmatched in his later work (his hotel porch confrontation with James Mason’s Humbert Humbert is a marvel of nervous energy and quirky timing).

The rarely seen footage woven throughout the program creates as much frustration as fascination. The Unknown Peter Sellers only skims the surface of such lost treasures as "Carol for Another Christmas," a post-apocalyptic version of "A Christmas Carol" that aired once in 1964, and A Day at the Beach, a film written and produced by Roman Polanski that hasn’t been seen since playing once at a 1970 festival. It would be nice to get more than a brief glimpse of such rarities, but the restrictive one-hour running time of the special makes this impossible.

At the time of his death in 1980, Sellers had several projects in the words, including Romance of the Pink Panther and a remake of the Preston Sturges classic Unfaithfully Yours (a film that eventually went ahead with Dudley Moore in the lead role). Posthumous releases of The Fiendish Plot of Dr. Fu Manchu and a hastily assembled Clouseau sequel incorporating unused footage of Sellers proved to be a shoddy epitaph. If nothing else, one hopes The Unknown Peter Sellers can stir interest in a full-scale release of some of the artifacts it has excavated.