In general, television continued kicking cinema’s butt in 2017 as the dominant art form in terms of quality, creativity, and diversity in the pop culture food chain with a show that transformed the medium 25-ish years ago somehow doing it yet again, and even network TV offering some programs as clever and groundbreaking as their smartypants cable and streaming competitors. ON TO THE LIST!!! 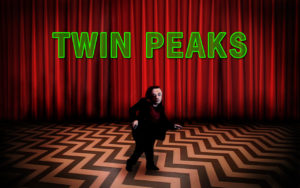 David Lynch’s magnum opus, spanning two seasons in the early ’90s, a film in ’92, and 18 new episodes in 2017 is such a singular accomplishment that I vacillate between having no words to speak of it and wanting to write a 10-volume critical analysis. It’s the kind of show that fans love intensely but don’t want to proselytize because it’s assuredly not for everyone (and even its most passionate devotees can grow frustrated with it at times and/or disagree intensely about its best and worst elements). But that Rorschach inkblot aspect of the show is part of what makes it so unique and special: no two people perceive it exactly the same way, thanks to its dream logic visuals, sounds, themes, characters, and plotting — the exact opposite of most focus-tested entertainment designed to appeal to as many paying customers as possible in exactly the same way every time, with no room for misinterpretation or anything that might conceivably make a single viewer uncomfortable. On the flipside, discomfort is “Peaks”‘ entire raison d’être, whether manifested via mundane scenes that go on way too long, sudden shocking bursts of graphic violence, or the specter of beloved characters ravaged by age and loss (the latter effect duly intensified by our understanding that cast members like Catherine “The Log Lady” Coulson and Miguel “Albert Rosenfeld” Ferrer knew they were dying in real life as they filmed their scenes for the 2017 reboot, and Harry Dean Stanton was not long for the world as he crooned “Red River Valley” in the guise of spectral Fat Trout Trailer Park manager Carl Rodd). Yet every Lynch production is likewise spiced with humor, humanity, and breathtaking moments of transcendence — so, if I were to hazard a guess as to the meaning of the “Return” as a whole, it might simply be this: an exhortation to hold on tightly to every small pleasure and true moment of connection in our lives, each sip of damn fine coffee, and fleeting victory, ’cause all the rest is the white of the eyes, and dark within. Drink full, and descend. 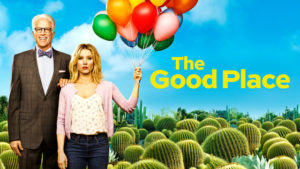 Much like the original “Twin Peaks”, it’s flat-out amazing that a show like “The Good Place” found a home on network TV in the first place and downright reassuring that it’s managed to thrive there. Set in the afterlife, suffused with trippy visuals, and deeply concerned with ethics, personal transformation, and the meaning of life, creator Michael Schur’s half-hour sitcom also features a mix of goofy sight gags and whip-smart comic dialogue, plotting and mythology as complex and immersive as “Lost” or “Westworld” (but way more cohesive and logical), and one of the most likable (and diverse) ensembles on television — not to mention a no-big-deal attitude to interracial romance that Hollywood studios would do well to emulate. Ted Danson (channeling Tim Gunn by way of Fantasy Island’s Mr. Roarke) and Kristen Bell are both fantastic as the leads (and their star wattage and cozy familiarity have surely helped with the Nielsen ratings), but William Jackson Harper, Jameela Jamil, and Manny Jacinto are equally good as the brain, the princess, and the criminal in the show’s existential breakfast club, while D’Arcy Carden is the unquestionable cast standout as Janet, a chipper, supernatural version of Siri suddenly and awkwardly upgraded with a soul. 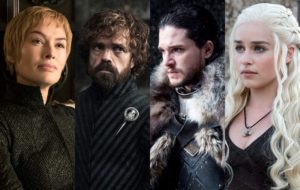 “Game of Thrones” is so massive, with so many plates spinning at all times, that it’s never going to have a perfect season. For instance, as the show enters its endgame, viewer complaints have shifted from “it’s too slow-paced” to “it’s too fast-paced” — and, indeed, with events speeding up in Westeros, season seven featured fewer casual character moments of the sort that always made the series feel more human and relatable than most standard fantasy fare. As a trade-off, though, we did get to enjoy a succession of long-awaited payoffs and reunions (some literally years in the making) — and while showrunners David Benioff and D. B. Weiss have (somewhat) changed course in terms of sparing fan favorite characters from seemingly certain deaths, there were still a few supremely satisfying send-offs in 2017. And, best of all, the violence against women that earned the show some of its harshest criticisms early in its run has given way to an endgame with four truly formidable females holding nearly all of the show’s remaining cards. (Though of course, none of the above answers the penultimate season’s biggest plot logic question of why Dany didn’t just fly North of the Wall in the first place to snatch a White Walker as proof of the coming invasion, but still…ice dragon!!!) 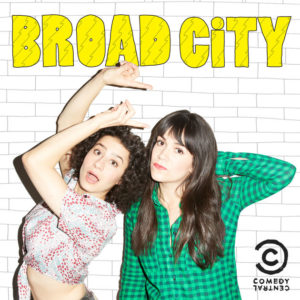 Speaking of killer queens, Ilana Glazer and Abbi Jacobson continued raising the comedy bar ’til dude, it was so high with another wildly inventive, sharp-edged season of episodes ranging from their laser-targeted smackdown of retirement community racism to a psychedelic mushroom trip as brilliantly bonkers in its way as David Lynch’s nuclear phantasmagoria in the instant classic eighth hour of “Twin Peaks: The Return”. Best of all, “Broad City” was the perfect rebuttal and balm for all the relentless negativity of 2017, with Abbi seeking sexual therapy to reclaim her orgasmic ability after Hillary Clinton’s loss before joining Ilana in a witch’s coven to fight back against the toxicity of the current president (whose name, appropriately enough, was brilliantly bleeped from the show like a curse word all season). 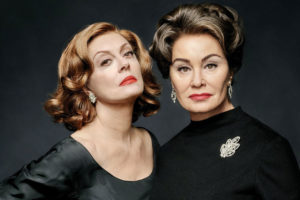 Sadly, of course, not all women unite in solidarity against the Man. Instead, some turn on each other, like the lifelong frenemies of Ryan Murphy’s “Feud”. The story, centered (mostly) around the production of 1962’s “hagsploitation” horror film “Whatever Happened to Baby Jane?”, depicts the origins and escalation of the legendary feud between Bette Davis and Joan Crawford (embodied rather than impersonated in award-worthy performances by Susan Sarandon and Jessica Lange, respectively). The irony and tragedy, of course, is that both the screen divas have struggled long and hard for success in a male-dominated industry (sustaining deep though often self-inflicted psychic wounds along the way), and share so much in common they seem like natural allies. Instead, they constantly undermine each other (with the help of female gossip columnists like Judy Davis’s Hedda Hopper), uniting only in contempt for even younger actresses and occasional, heartbreakingly brief moments of empathy for one another. 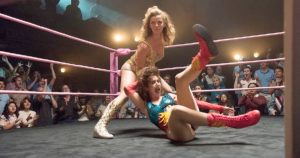 On a cheerier note, the female feuds of GLOW are (mostly) for show and far more empowering in Liz Flahive and Carly Mensch’s fictionalized tribute to the Gorgeous Ladies of Wrestling league. The setting is Hollywood again, roughly two decades after “Feud”, where it’s still hard for actresses to find decent opportunities in a (still) male-dominated industry — so Ruth Wilder (played by national treasure Alison Brie) signs up instead for a tacky sexploitation “sports” exhibition that unexpectedly provides more of a creative outlet and support system than all her work playing secretaries and girlfriends in the “legitimate” show biz world. Bonus points for Marc Maron as the cranky but good-hearted, Marc Maron-ish director tasked with managing all the real and invented personas of his GLOW performers and Britney Young as “Machu Picchu”, the gentle giant daughter of a pro wrestling family who’s determined to prove she can piledrive just as well (or better) than her skeptical father and brothers. 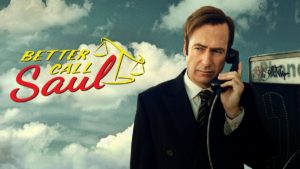 It’s hard to believe a snail-paced show about class action retirement home settlements and bar association disciplinary hearings can be so intensely suspenseful, but with characters as well-written and acted as those in Vince Gilligan’s “Breaking Bad” prequel it’s hard not to care about the fates of all concerned, even when we know going in what they’ll sadly eventually be. Specifically, we know that one of the most realistically adult romances on television — between flawed yet good-hearted Jimmy McGill (the indispensable Bob Odenrkirk) and his intense, driven, martini-dry business partner Kim Wexler (the dazzling Rhea Seehorn) — is almost certainly doomed thanks to the relentless, Javert-like malevolence of Jimmy’s brother, Chuck (Michael McKean). Watching the inevitable slow motion destruction of hard won careers and relationships is like a horror movie where the heroes simply can’t escape the monster no matter how fast they run — and all that dramatic tension’s in addition to the deadly, high stakes drug cartel stuff featuring lone wolf fixer Mike Ehrmantraut (Jonathan Banks) and the return of crime boss Gus Fring (Giancarlo Esposito) in 2017’s finest hour of feel-bad entertainment. 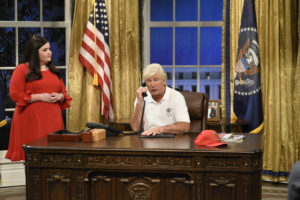 “SNL” ended 2016 channeling the emotional trauma of the majority of Americans horrified by the prospect of a Trump presidency (via the instant classic post-election Dave Chappelle episode) and continued strong throughout 2017 with spot-on clap-backs against the endless affronts and scandals of the Donald and his confederacy of dunces (from Kate McKinnon’s portrayal of Kellyanne Conway as a sewer-dwelling “It” to honorary cast member Melissa McCarthy helping to grease the skids of Sean “Spicey” Spicer’s ouster with a brutal series of impersonations). But the show’s sketches, videos, and invaluable “Weekend Update” segments also landed plenty of hits across the aisle, including eviscerations of the show’s alumni sex offenders Al Franken and Louis CK and the ineffectual lameness of the Democratic Party. 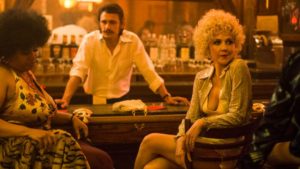 Can there ever be too much James Franco? Obviously, the answer is yes — and by some accounts, America was already dangerously over-Franco’d way back when the ubiquitous actor hosted the 2011 Oscars and saturation levels have been increasing ever since. Thus, it’s logical to be wary of a show featuring not one but TWO Francos (as twin brothers Vincent and Frankie Martino) in the short-and-sweet first season of “Wire” auteur David Simon’s new series about the birth of the porn industry (a premise unsavory enough all by itself to spark fears of a “Vinyl”- or even “Entourage”-strength pandemic of stage-4 douche chills). Yet remarkably, Simon somehow managed to make both Franco and the subject matter palatable with the near-documentary realism of his portrait of 1970s Manhattan, the gritty workaday camaraderie of hookers, pimps, cops, mobsters, and miscellaneous lowlifes rubbing shoulders in the trenches of Times Square, the non-flashy, unromanticized ugliness of criminal/sex trade brutality, and a riveting central performance by Maggie Gyllenhaal, who viscerally conveys the hard logic of a shift from streetwalking to stag films for a woman without better options. 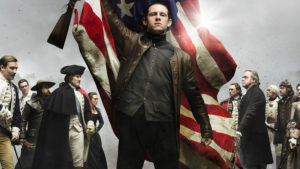 Things get tricky at the end of a TV Top Ten list as clear standouts give way to a bunch of shows all basically as good as each other (and their own previous seasons). Thus, I’m using my #10 spot to say farewell to the consistently well-crafted Revolutionary War spy drama “Turn” on the occasion of its final season. Capturing its 1770s era just as well as “The Deuce”‘s take on the 1970s (but with far less fanfare), the little-watched series also featured engaging stories and a uniformly solid cast including Samuel Rourkin as the sneering, sadistic, scene-stealing cad, Lieutenant-Colonel John Graves Simcoe. Was it better than Showtime’s hilarious meta Hollywood comedy “Episodes” (which also wrapped up this year)? Maybe, but only in terms of degree of difficulty, and both shows will be missed — while other high quality near-list-missers like “Silicon Valley”, “Brooklyn 99”, “Baskets”, “The Crown”, “Search Party”, and “Veep” (brilliantly tackling the Trump era with longtime buffoon Jonah’s sudden acquisition of a passionate, no-nothing political base) have already had their time in the sun (and will surely rise to list prominence again in future seasons). So, farewell, “Turn”, and may all your snakes in the garden rest peacefully in television heaven.

Could This Show Really Have Been As Terrible As It Looked?: “I’m Dying Up Here”

Plenty Likable But Not Really Great or Terrible, So Why So Much Passionate Love AND Hate for It?: “Stranger Things”

Great Idea, Some Nice Moments, But Not Really Any Great (or Even Very Good) Episodes: “Room 104”