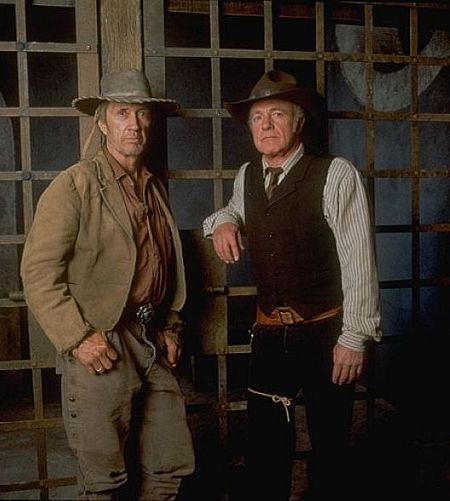 How many times will screenwriters continue to think they’re doing something new and innovative by dribbling out Westerns that feature one or more characters pontificating about how "times have changed"? This idea should have been put to rest after The Wild Bunch; it’s not like that film’s going to be bettered anytime soon. Even The Grey Fox treated this hackneyed theme with all the respect it deserved, and no more, and lightened the tone with more than a little self-deprecating humor from the late Richard Farnsworth. No such luck with Warden Of Red Rock, which lumbers onto the screen seemingly without any concept of its own obsolescence, and so much half-baked existential baggage it plays like a parody of Shane ghost-written by Samuel Beckett.

James Caan plays the title character, a prison warden, the most unflinchingly noble and dignified man in the film. He treats his prisoners humanely, puts guards who mistreat convicts in isolation (this is supposedly in 1910, mind you–not exactly the Golden Age of prison reform), and goes so far beyond the pale in fulfilling the dying wish of a condemned man that by film’s end, he’s practically married to the widow (who is of course saddled with a darling–and bilingual–child). David Carradine plays a murderous lifer, and ex-running buddy of Caan’s from his "wild days," who turns up in Red Rock. Will he escape, and have to be hunted down? The viewer’s degree of suspense as the plot unwinds itself is entirely relative to how many Westerns he or she has seen before this one.

A respectable pile of bodies accrues, naturally, and Caan gets enough scenes of staring manfully out the window or into the desert landscape, contemplating his lonely, macho existence, to satisfy the ham that lurks just under his topmost layer of skin. Carradine as the villain essentially plays the great-grandfather of his character in Death Race 2000, and seems to be having more fun with the role than the viewer will. Executive producer Brian Dennehy turns in a few perfunctory scenes, but it’s hard to understand why. This isn’t an unremittingly awful movie; it’s merely boring, and essentially pointless. It has just enough ideas to make its failure to realize them glaringly obvious.