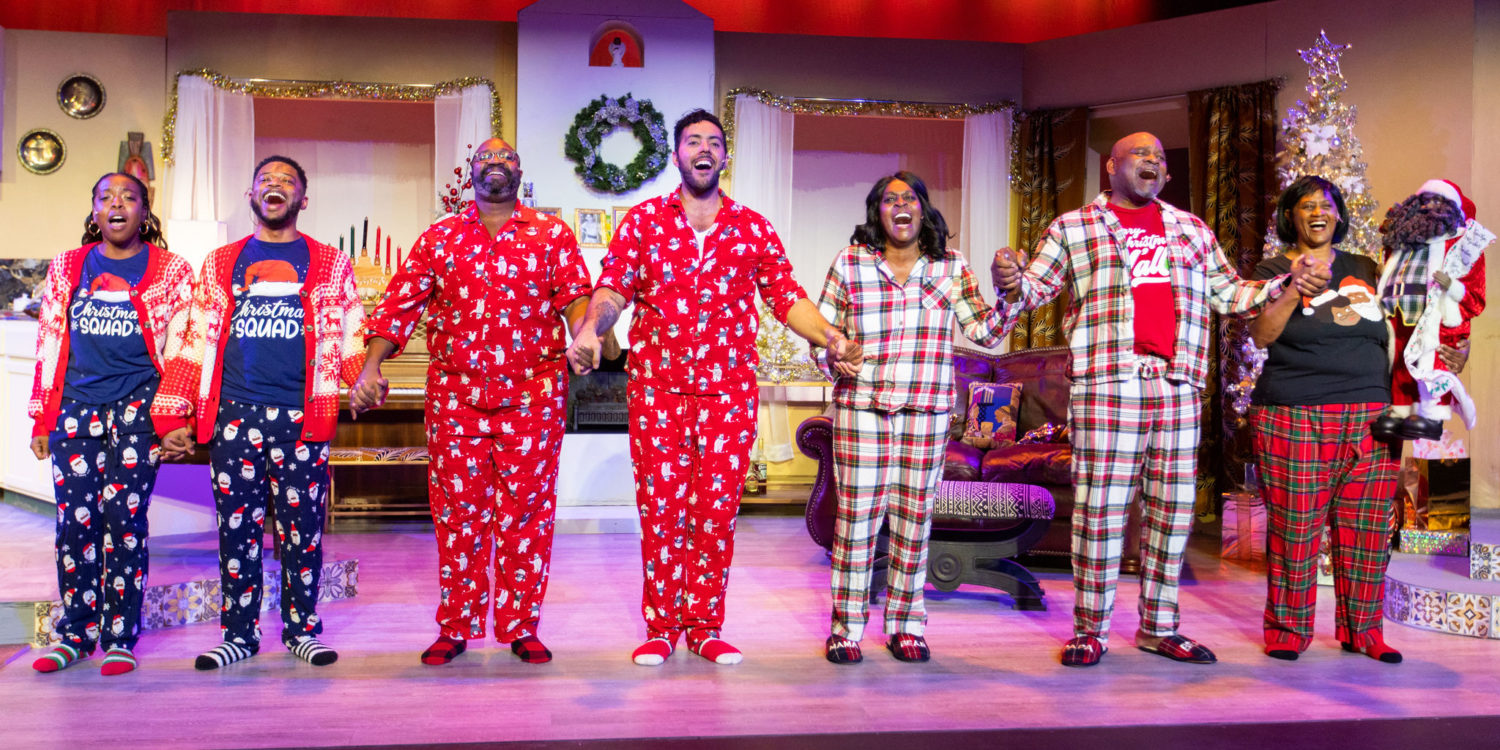 New Village Arts Theatre launches its 20th Anniversary Season with the world premiere of the musical “1222 Oceanfront: A Black Family Christmas.” Featuring a mix of re-imagined classic carols and original songs, it’s a touching and humorous story about how nostalgia can unwittingly hold people back from a more rewarding future.

The story takes place on Christmas Eve at the Carlsbad home of Dorothy Black (Milena (Sellers) Phillips), a widow who has carried on holiday rituals for decades to the delight of her attorney son James Jr. (Kory Laquess Pullam), adopted son Javier (Frankie Alicea-Ford; who radiates a personality as sunny as his character’s job description of San Diego TV weatherman) and assorted extended family members.

Less enthusiastic is James Jr.’s wife of three years, Aadya (Deja Fields), a red-hot social media influencer who can’t seem to find a way to influence her mother-in-law to like her; and Javier’s love interest Brian (Durwood Murray) who is consistently a no-show at these family occasions. Attempting to excuse the ghosting as work-related, Javier points out Brian is a doctor and no doubt dealing with a medical emergency. This explanation rings hollow when it’s revealed Brian is a podiatrist.

James Jr.’s accidental discovery of an eye-popping appraisal report fuels wild imaginings of the family home being sold. The unexpected appearance of Victor (Victor Morris), the neighborhood mail carrier, who seems way too comfortable around Dorothy, has her son convinced she’s fallen prey to a fortune hunter.

And then there’s Dorothy’s sister Lizzie (Portia Gregory, in an utterly engaging performance) who is accompanied to the party by the ashes of her late husband housed in an oversized keepsake Santa Claus doll. Gives new meaning to the expression “he sees you when you’re sleeping.”

Two years ago, while looking for shows to produce over the holidays New Village Arts, noting that most seasonal offerings are told solely from a white perspective, decided to commission a new yuletide musical. San Diego playwright Dea Hurston worked with Frankie Alicea-Ford, Kevin “Blax” Burroughs and Milena (Sellers) Phillips to draw from their own experiences to meld universal themes of sibling rivalry, family secrets and holiday-planning angst with social justice issues – such as discriminatory real estate practices – that give the story a fresh viewpoint and added gravitas. The team met weekly over Zoom throughout the pandemic in order to bring “1222 Oceanfront” to the stage under the assured direction of Delicia Turner Sonnenberg.

Courtesy of costume designers Chanel Mahoney and Joy Yvonne Jones, a red oversized sweater that belonged to Dorothy’s late husband, becomes a character itself by figuratively and literally encasing the woman in the weight of tradition and obscuring the vibrant, attractive person underneath. Sound designer is Violet Ceja, lighting designer is Daniel Johnson-Carter, choreography by Lesa M. Green and set/properties design is by Savannah Brittian.

Original songs are by Milena (Sellers) Phillips with carols re-imagined through music adaptation and direction by John-Mark McGaha. The tunes are performed by a solid cast of gifted singers with Victor Morris delivering a show-stopping yodeling rendition of a ballad titled “Cowboy Christmas” that should be part of every repertoire of holiday songs.