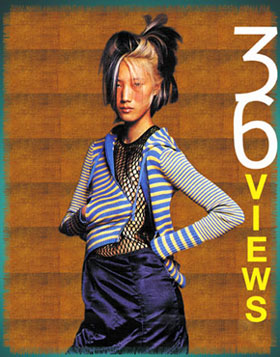 Playwright Naomi Iizuka has fulfilled a prime dictum of true art in her 36 Views, now having its world premiere at Berkeley Rep. According to philosopher/critic George Santayana, a work of art is most successful when the feeling and the form coincide. This seems to be what happens in 36 Views, a play about fraud in the art world. Paradoxically, this also is what makes Iizuka&#146;s play fall short of true art. The playwright&#146;s clever hand is visible in almost every scene. The language is glib; the situations contrived. After all the smoke and mirrors are gone, in the absence of any real emotion or character development, the audience is apt to feel like the victim of a fraud.

Not that 36 Views isn&#146;t absorbing or beautiful to look at. It&#146;s gorgeous, perhaps one of the sleekest productions ever to take the Berkeley stage. Myung Hee Cho&#146;s costumes range from elegant kimonos to high punk, just as the script seesaws between pop culture and the Asian art of many centuries ago. Douglas Stein&#146;s elegant penthouse of sliding screens is augmented with the projection designs of Ruppert Bohle, showing you the art as the characters discuss it … and a whole lot more.

The story of art dealer Darius Wheeler (wheeler-dealer, get it?), an unscrupulous buccaneer in the world of collectors, proceeds rapidly in sound byte scenes (36 of them to my count, corresponding to the famed Hokusai prints of Mount Fuji, from which the play takes its title). Wheeler (Bill Camp) gets caught in his own net when he stumbles across what he is convinced is a priceless ancient Japanese &#147;pillow book,&#148; the discovery of which will turn the field of Asian antiquities upside down. Problem is, what he has found are the notes for a novel by his brilliant but under-appreciated employee. Very realistic (think Memoirs of a Geisha), the poetic musings of a Japanese court lady of old pull him in. Not wanting to admit the truth of the matter, the self-effacing assistant, John (a sympathetic Ebon Moss-Bachrach) hastily invents a complicated provenance for a supposed ancient book which someone, he says, has sent to Wheeler for authentication.

And smelling a sale, authentication is what he gets, from no less than the rising young star of a prestigious university, the elegant Setsuko (Liana Pai), who ends up, not only in his confidence but in his bed &#150; occasion for the almost-obligatory-by-now Berkeley Rep nude scene.

Panicked by his position, assistant John, basically an honest fellow, runs to his friend Claire (Elaine Tse), a painter and art restorer who has a grudge of her own against Wheeler. Before long, with careful calligraphy and the application of some ash and tea, the &#147;pillow book&#148; becomes a created reality and Wheeler snaps at the bait.

But, in case you think I&#146;ve given away the plot, this is only the beginning of this complicated tale of the scammers being scammed. Fine performances are turned in by Rebecca Wisocky as a journalist trying to nail Wheeler in a sting of her own and Peter Donat as a pretentious professor trying to get a little glory for himself.

It&#146;s a complicated tale, perhaps best suited to one of those novels you buy at an airport stand, and director Mark Wing-Davey deserves a bouquet for getting it across on the stage. Problem is, it is like one of those dim sum dinners. After all this gorgeous stuff comes at you, fast and furious, you may end up feeling hungry for a real meal.