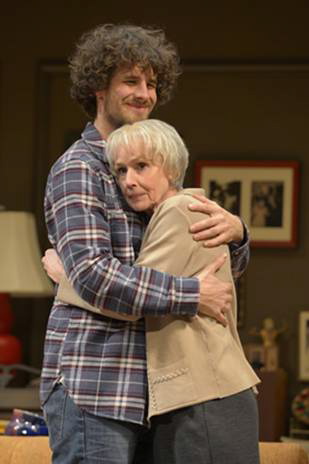 Reggie Gowland and Susan Blommaert in4000 Miles” at A.C.T.
Photo by Kevin Berne

Amy Herzog’s “4000 Miles” rode in from the East on a wave of critical praise and high expectations. Unfortunately, it seems to have lost some momentum along the way. A sweet, tart tale of a reunion between a 21-year-old and his grandmother, more than 70 years his senior, it has a few things to say about growing up and growing old, but they get buried in a muddle of sex, Marxism and easy laughs. Well-acted and directed by the talented Mark Rucker, it’s amusing and even touching at times, but it never gets very deep under the skin — or wrinkles, as the case may be.

Leo, the grandson (Reggie Gowland), has just arrived from Seattle to New York on a summer road trip with his best friend, the latter lost in a tragi-comic accident en route. Arriving on his aged grandma’s doorstep, he beds down for a few weeks while he gets his bearings and sets up something of a culture clash between generations. Leo is a sweet kid in his own selfish, scruffy way. Grandma Vera (Susan Blommaert) provides the tartness. Yeah, she’s a little old lady but a truth-teller in more than her name, a die-hard Marxist like her late husband who wrote and — presumably — taught the subject and a crabby, foul-mouthed “pain in the ass” as she frequently dubs her unseen neighbor, her only friend.

In fact, the personalities of Leo and his grandma provide the broken spokes in the wheels of this otherwise-clever comedy/drama. Neither of them are very likeable people and, in the end, you don’t have a lot invested in what happens to them.

There are a few other women in Leo’s life besides Grandma Vera. There’s his mother (also unseen) who is worried sick about him, especially since his friend’s accident, and whom he refuses to call, more or less on adolescent principle. Then there’s his adopted Chinese sister Lily (briefly heard but never seen), whom he had the bad judgment to kiss at a drunken party in a less-than-brotherly way, sending her directly into therapy. Don’t ask!

Bec (Julia Lawler) is the girlfriend, deserted for the sake of the buddy-bike trip, a nice girl who is (wisely) on her way to breaking up with Leo. And, finally, in a cameo that walks away with the show, Camille Mana is hilarious as a one-night-stand Leo brings back to grandma’s apartment for a little fling, interrupted as Vera stumbles onto the scene.

There are quite a few funny moments in this 90-minute play, its scenes separated by numerous (too numerous) blackouts, but they are not enough to save it from a certain banality. Even the manner of Leo’s biking companion’s death, once it is finally revealed, is ludicrous to the point of anti-climax. It’s hard to be young; even harder to grow old. “4000 Miles” doesn’t do a lot to ease the passage in either direction.