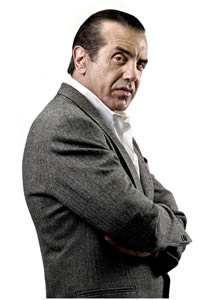 Written and performed by Chazz Palmenteri

He might have called it “Fathers and Sons” if Turgenev didn’t get there first. Chazz Palmenteri’s “A Bronx Tale” is a long story about a nine-year-old boy, his real father — an honest bus driver – and his temporary father-of-choice, the neighborhood mob boss who befriends him, teaches him “the street” and continues as his mentor through his teens. It’s a nice story. It has a moral, several in fact, and it’s as funny as the names of the various “wise guys” the kid meets on the street.

There’s Rudy Ice (real smooth), Eddie Mush (a real screw up; everything he touches turns to mush), Jo-Jo the Whale (a really big man) and Frankie Coffeecake (bad acne) for starters. They all are part of Sonny, the big man’s, crew. Palmenteri inhabits these and some 13 other characters, the kid, his parents, his girlfriend and his buddies in the course of 90-minutes. And the actor, who has 50 movies (including a film of “The Bronx Tale,” directed by Robert de Niro, and Woody Allen’s “Bullets Over Broadway” which earned him an Oscar nomination) and a number of Broadway plays under his belt, does it well.

Directed by Jerry Zaks (Tony Awards and Broadway hits too numerous to mention), this is the version that played recently Broadway. San Francisco is the third stop on a national tour. But “A Bronx Tale” and its author go back a long time, all the way to 1989 when he first wrote it. A struggling actor, suddenly fired from his day job, Palmenteri penned the autobiographical script and performed it in clubs until it made it to an off-Broadway theater. Hollywood followed and he hasn’t stopped since. Although he has done a number of things, he may be best remembered for his portrayal of gangsters in movies like “Bullets” and “Analyze This.” The prototype may be Sonny and the boys from the Bronx.

Palmenteri conjures up a one-man episode of “The Sopranos” with these characters. And there are issues involved: loyalty, for example. When the 9-year-old witnesses a murder on the street does he “rat” to the police? When Sonny states that: “the working man is a sucker,” where does that put the boy in relation to his hard-working father? Issues of race come up when the kid’s first real crush is on an African American girl at his school. Issues of good and evil run all the way through, yet the touch is light and leavened with humor.

James Noone’s set, a house, with the all-important front stoop, reminds one of the set for Billy Crystal’s one-man show. There is a street sign on the corner, where the wise guys hang out when they’re not at the bar next door, shooting craps, drinking or roughing up a motorcycle gang that has the bad luck to stop by. Sometimes they go to the track or ride around in Sonny’s Cadillac. But mostly they’re on the street. And growing up on the street is what “A Bronx Tale” is all about.