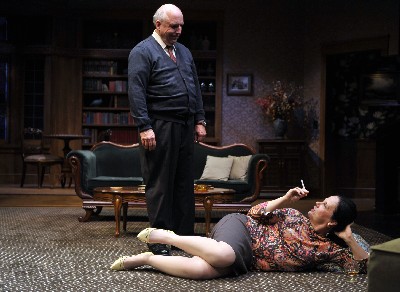 There are no mountains or chasms in Agnes’ staid suburban existence. It is a pleasant rolling plain—or so she says. And she intends to keep it that way, no matter what. Thus begins Edward Albee’s powerful 1967 Pulitzer Prize winning comedy/drama “A Delicate Balance.” And the rest of the play shows Agnes (Kimberly King) in her struggle to maintain the equilibrium in spite of a husband who has long ago withdrawn from the fray, an outspoken maverick sister who drinks too much, an immature, much-married daughter who has returned to the fold after yet another conjugal failure and a couple of neighbors who move in, unannounced and uninvited, when their own existential angst becomes too much to bear.

Fueled by alcohol and clever dialogue, “Balance” builds momentum—much like the playwright’s earlier “Who’s Afraid of Virginia Woolf,” which it resembles in structure if not in violence—until, in the third act, it becomes a tragedy, a quiet tragedy to be sure but no less moving. In a wonderful revival at Berkeley’s Aurora Theatre, with a superb cast, masterfully directed by Tom Ross, it is a shining example of what good theater can be and a fitting opening to the scrappy little company’s 20th anniversary season.

King’s real-life husband, Ken Grantham, plays Tobias, Agnes’ stoic, reserved spouse, an affluent man who drowns disappointment in martinis and cognac and swings trouble away with a golf club. Grantham is a founding member of, not only Aurora, but Magic Theater and Berkeley Rep and a fine (though apparently now retired) actor. He and his wife anchor this production like the old pros they are and play off each other with grace and ease. The other performances are first rate as well, especially that of Jamie Jones as contentious sister Claire. It is Claire who delivers most of the laughs as she spars with her sister, Agnes, and attempts to collude with Tobias. Whether serenading the assembled guests with an accordion or balancing a martini glass on her forehead, Jones is a marvel. She is by far the most interesting member of the family and, perhaps, the most insightful. “We submerge our truths and prefer our sunsets over untroubled waters,” she notes.

But Claire’s own life is a mess. As is that of Julia (Carrie Paff), the spoiled only child who loves being married but can’t quite manage to stay that way, running home to mommy and daddy when her world falls apart (which is pretty often). Julia is a brat and Paff’s tantrums are wondrous to behold. Last, but far from least, are Charles Dean and Anne Darragh as the neighbors who drop in and decide to stay. They are the catalyst that upsets the balance (false though it may be) that holds this family together. Both have something of importance to say and both actors say it very well.

Richard Olmsted’s comfortable old-money living room set and Callie Floor’s costumes lend authenticity to the scene and Albee’s themes resonate today as strongly as they did when it was first written. Only the never-ending cocktail hour, smoking and a brief reference to marijuana might place the action back in the 1960s. Otherwise, the buried passions, disappointments and fears of “A Delicate Balance” could be happening right now. And probably are.

(22314)
$17.70 (as of January 24, 2021 - More infoProduct prices and availability are accurate as of the date/time indicated and are subject to change. Any price and availability information displayed on [relevant Amazon Site(s), as applicable] at the time of purchase will apply to the purchase of this product.)

$12.40 (as of January 24, 2021 - More infoProduct prices and availability are accurate as of the date/time indicated and are subject to change. Any price and availability information displayed on [relevant Amazon Site(s), as applicable] at the time of purchase will apply to the purchase of this product.)
related posts